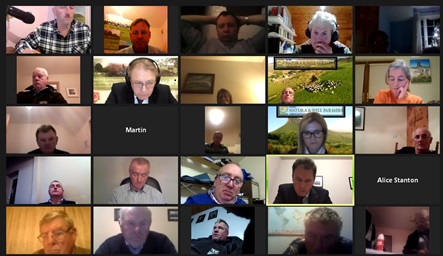 INHFA push Minister on Designations and CAP at Virtual AGM

President of the Irish Natural  & Hill Farmers Association (INHFA) Colm O’Donnell cautioned against the prospect of more land designations and stressed how the new CAP must not discriminate against farmers on environmentally sensitive lands.

This call was made at the Associations AGM last Friday which was held on the zoom platform and attended by Minister for Agriculture Charlie McConalogue. In his closing address O’Donnell highlighted the flawed policy of using the designation process to protect the planet and stressed how the “INHFA are for biodiversity but firmly against more EU land designations.”

The EU nature directives have he stated “failed over the last twenty years for everyone and in particular farmers. Unfortunately he continued “the principle objectives outlined in the proposed EU Biodiversity Strategy appears to suggest more of the same.”

The President continued by urging the Minister to engage with other Departments in particular Environment and Heritage to develop a united front to protect those farming these environmentally sensitive areas.”

In acknowledging the role Minister McConalogue has in the EU Council of Ministers, the INHFA President stressed the need to ensure that enhanced conditionality under GAEC 2 must “not discriminate against farmers with these carbon rich soils and ensure these areas remain fully eligible as agricultural areas in any final agreement on definitions.”

In addition to this O’Donnell added how desired outcomes on these areas needs to be incentivised through eco schemes and complemented by Pillar 2 schemes in the next iteration of CAP.

On the CAP transition O’Donnell welcomed the Minister’s commitment to a smooth transition including the piloting of a new Agri-environmental scheme and the rollover of existing schemes for the next two years. On this the Minister did confirm that any penalty a farmer incurred in the rollover year of GLAS will only apply to that year, while in relation to the sheep welfare scheme flexibility on sheep numbers may be considered, but on a case by case basis.

In relation to convergence of Pillar 1 payments through the CAP  transition, an issue the Minister indicated he would look at for year two of the transition. The INHFA leader reminded the Minister that the EU Commission has been given sufficient flexibility to Member States to continue with the internal redistribution of farm payments through transition. On this he stressed that “while the monetary value is small, the principal of a fair redistribution is something the Minister has supported in the past.”

In thanking Professor Alice Stauntons on her excellent presentation to the INHFA delegates on ‘Animal sourced foods and human health’ the INHFA President latched onto the Professors take home message, that replacing fresh meat and dairy with additive rich, calorie rich, processed foods so as to solve greenhouse gas emissions is very likely to harm human health. A much better solution she outlined is to optimize both the nutritional quality of fresh food and sustainable agricultural practices.

In urging the Minister to use this approach in the Governments 2030 Foodwise vision he added “how the extensive farming systems practiced by many of our members can play an important role here. This also ties into the CAP 2020 Legislative proposals in relation to public health and animal welfare.”

In his address the Minister also referenced the INHFA submission on wool and their commemoration proposal to plant ten million native Irish trees stating, how the Department will engage further with the INHFA on these.

On Brexit which was addressed following a question from the INHFA President, Minister McConalogue outlined the challenges to a final agreement  stating that a no deal would have a massive impact especially  in farming and rural areas. However with 95% of the detail agreed the hope is that a deal can be reached, but even with a deal, there will be challenges to trade especially for hauliers due to increased paperwork.

In concluding O’Donnell maintained that any contingency plan for a no deal Brexit must include compensation funding for our primary producers (suckler and sheep farmers) unlike what has happened in previous plans.