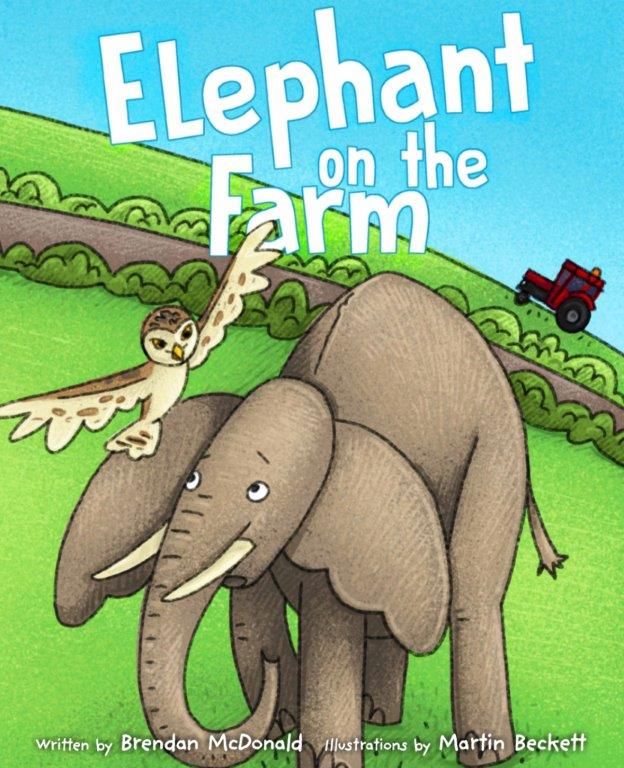 ‘Elephant on the Farm’ is the debut children’s book by Laois man, Brendan McDonald.

This story is of friendship, diversity and inclusion follows Edward the Elephant who meets Olive the Owl, and his journey from being totally different to being accepted as one of the Farm gang.

Brendan is from a farming background and complied the book during lockdown, completing it and self-publishing just before Christmas.

“I grew up on a mixed tillage, beef and sheep farm in Killeen, south Laois just near the border with Kildare and Carlow. Being from a farming background, I wanted the story to reflect some of the scenes that can be seen on a farm,” said McDonald.

“We are all different, and the story really resonates with that message,” Brendan said.

He attended University of Limerick (UL) to study law, qualifying as a solicitor in Kildare before going in-house and joining IDA Ireland in 2012.

In 2017, he became Regional Business Development Manager in the south-east. I got the opportunity to move back to Carlow just 15 minutes from the home farm.

“As my mother Kathleen constantly reminds people ‘he was afraid of physical work, so he went off to study!’”

Brendan’s older brother, Paul, now runs the farm, but his dad JJ and mam Kathleen still help out, ably assisted by all his nieces and nephews who all love visiting the farm.

‘So much more difficult than I thought’

“l always had an affinity for telling stories, and over the last few years I had been telling stories and indeed reading bedtime stories to my nieces and nephews, so I said to myself one day I’ll give this a go – how hard could it be” Brendan noted.

However, it was, in fact, so much more difficult than I thought. As I wanted to write in a rhyming style, every single sentence and page had to flow correctly in line with the illustrations so that the reader is hooked from page one, and more importantly that they will want to read it again and again.”

“This is also so important for mammy’s and daddy’s as they are ultimately the ones that have to read it every night!.”

Brendan wanted the setting for his first book to be based on the family farm in Laois and he notes that “some of the lines resonate directly. We are a Massey Ferguson farm, so there is a line in the book: ‘Two tractors, a trailer, a big yellow bailer’ which was directly from a scene on the farm one day last summer”.

“I haven’t really seen a huge amount of farm stories, so I wanted to bring one to life in a positive manner.”

Key to any story is a talented illustrator. Brendan explained how he went about this process: “I found Martin Beckett, based in Donegal, who provided the illustrations, on the illustrators Ireland website.”

“Martin’s professionalism and skill in bringing the farm scenes to life was invaluable. The beautiful illustrations really helps the story resonate with young readers.”

20% of net profits from the sale of ‘Elephant on the Farm’ will be donated to Crumlin Hospital. Brendan notes that his godson Tommy spent a short time attending Crumlin a couple of years ago.

“All is now good thankfully, and as an acknowledgement of the fantastic work that the staff in Crumlin undertake on behalf of all Irish children, I wanted to make a donation from sales of the book.”

“We are all conscious of the push to buy Irish and to Shop local, so bringing the book entirely to life in Ireland was certainly a pre-requisite on my publishing journey.”

Purchase Elephant on the Farm

The book is printed by Modern Printers in Kilkenny. ‘Elephant on the Farm’ can be purchased from Brendan’s own website www.bedtimestory.ie for €9.95.

Brendan McDonald is already working on his next book which he hopes to finish and publish early next year.

- Advertisement -
Previous article
John Glenn: ‘The Band with the Magic Beat’
Next article
VIDEO: Converting to dairy with 45 heifers and 1 robot