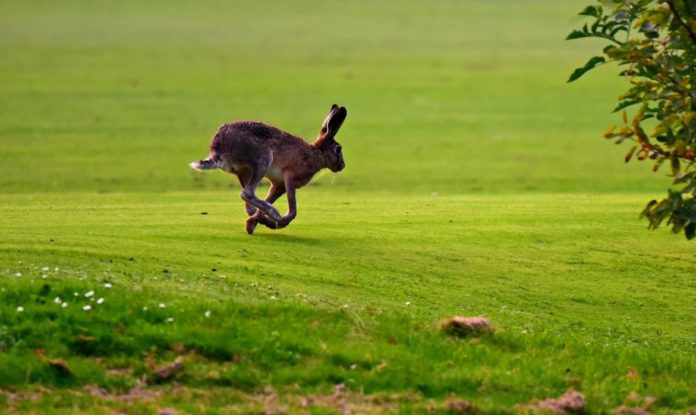 Coursing suspended: Over 1,200 hares released back into the wild

Clubs affiliated to the Irish Coursing Club (ICC) have released some 1,270 previously captured hares back into the wild.

The news has been welcomed by Minister for Housing, Local Government and Heritage, Darragh O Brien TD.

The Department communicated with the ICC to seek to secure the release of hares that it was holding for future coursing meetings.

Currently, coursing activities have been suspended under COVID-19 level 5 restrictions.

Given that the duration of level 5 restrictions to December 1st, hares would have been held in captivity for at least six weeks, and in some cases for much longer.

Also, the department said it is not clear at what point after December 1st it may be permissible for coursing to recommence.

‘Better off being in the wild’

Minister O’Brien commented: “There have been some claims that my intervention in seeking the release of hares would result in them being hunted illegally by others.”

“It has been claimed that this measure will make it easier for illegal hunters, as they would now know the location of high numbers of hares”

“I would point out that after every coursing meeting hares are released in any case. These hares were in the wild until recent weeks.”

“Hares are a protected species, and are better off being in the wild rather than being held in captivity in large groups. I see no reason why they should have been held for the duration that coursing was suspended.”

As well as that, the National Parks and Wildlife Service of the department and An Garda Síochána have taken a number of prosecutions in relation to illegal hunting of hares in recent years.

“Finally, there have been a number of erroneous claims on social media that the National Park and Wildlife Service publish the release locations of hares by ICC clubs.”

“That is absolutely not the case. Such claims are misleading and designed solely to serve an agenda supporting the retention of the hares in continuing captivity,” he concluded.

Furthermore, Minister O’Brien and Minister of State Malcolm Noonan, recently announced the establishment next year of a Wildlife Crime Unit in the National Parks Service.

Malcolm Noonan TD, said: “A dedicated Wildlife Crime Unit will ensure a strategic and standardised approach to dealing with illegal persecution of wildlife.”

“We would continue to urge members of the public to report any suspected incidents where hares are being illegally hunted,” he concluded.