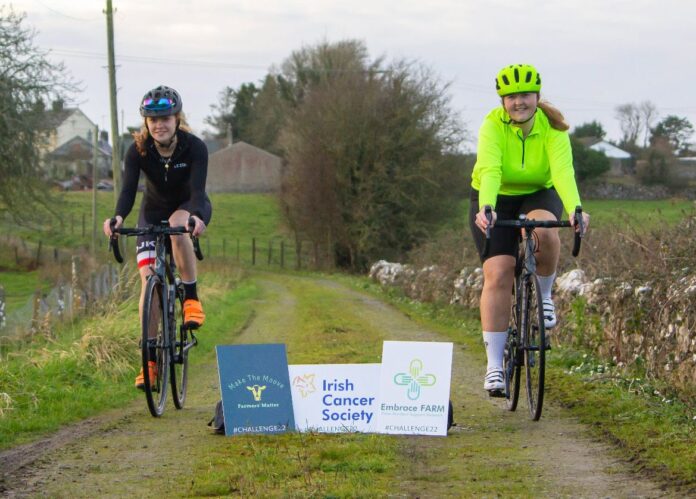 Elaine Houlihan, Macra na Feirme Munster vice-president, has called on everyone to support their charity cycle from Mizen to Malin Head this May.

The five-day, 670km run, is in aid of the Irish Cancer Society, Make a Moove and Embrace FARM.

“It is vital to support each other and raise awareness. My life, like so many others, was personally affected by cancer as my grandmother passed away after a long battle with the disease.”

“As Munster vice-president, I am also acutely aware of the mental health challenges, especially for young people in rural communities.”

“Many members contact me with concerns on a daily basis. We need to break the taboo and stigma around talking about mental health and treat it as a serious challenge for rural communities.“

“We are delighted to see so many cyclists joining us. 26 Macra members from across the country are committing to the five-day cycle, and three of these are undertaking to do it in 48-hours.“

“We have been very lucky as well in the support we have received from sponsors. We are hoping to keep raising funds in the coming months to support all the charities,” she concluded.

Previously, we interviewed Elaine Houlihan, a beef farmer, physiotherapist, secretarial assistant for a TD and Macra na Feirme member, as part of our popular women in ag segment.

The Athlacca, County Limerick native became involved in the organisation in 2014. She has played an active role at club (Kilmallock Macra), county, and national level.

Following her recent appointment, she strives to be “an active voice for all members in Munster on the national council”.

She hails from a 180-strong calf-to-beef farm and is a sales rep in her parent’s agricultural engineering company. The family operated a dairy enterprise until the early 2000s before converting to beef to grow their business.

Elaine completed the Green Certificate at Salesian Agricultural College, Pallaskenry, County Limerick. She is a qualified physiotherapist and a secretarial assistant for a TD.

Read the interview in full.