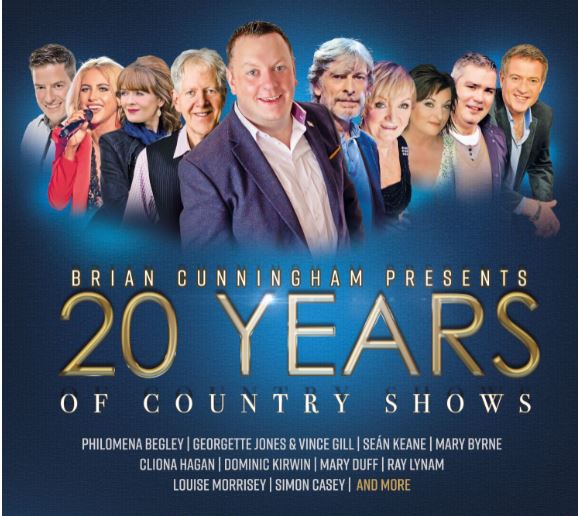 Brian Cunningham is celebrating 20 years of Country Shows with the launch of a CD with superstars from Ireland and America.

With a treasure trove of tales in the business, Brian is releasing a new CD to rejoice the last two decades.

Speaking about the launch, Brian said, “I love the country music business. I am delighted to launch a CD packed with elite artists which I am very proud to call some of my closest friends.”

“I have been in the industry for twenty years… and what twenty years it’s been! From packing out venues with our country music shows to trips to Nashville and beyond, it really is a true pleasure for me.”

“I am so thankful to the people who have supported me and my business for two decades. My team and I represent so many talented entertainers, and I am delighted to be part of their careers and watch them blossom.”

“For me, it’s not a job. This is part of our lives. Like everything, there has been ups and downs but to look back on the last twenty years—the thrills and spills—it’s been a fabulous journey and it has been such a joy choosing the music for this new album.”

“I am so pleased with it—it represents Brian Cunningham Agency and the artists we’ve worked with. It really has something for everyone.”

The CD is a mix of true classic country greats from the ‘Queen of Country’, Philomena Begley, Dominic Kirwan, Louise Morrisey, Ray Lynam, Kathy Durkin, America’s finest Georgette Jones and Vince Gill to the new generation of country music artists with Cliona Hagan, Barry Kirwan, and Olivia Douglas to name but a few.

Brian, and his team, are now one of Ireland’s largest entertainment firms with the company representing a host of personalities. Brian’s compass is instrumental in steering the careers of the popular faces we see lighting up our TV screens and stages around the world.

Queen of Country Music, Philomena Begley, has been with Country Shows since the beginning when Brian and the team first produced an Evening of Country Music at the Abbey Hotel in Donegal Town.

Since, she has become one of the main pillars of Brian Cunningham Agency. She said: “I have known Brian for a long time. He has done a lot for the industry and is a hard worker. He is always fun to be around and there’s no doubt but he has become a great friend.”

Kathy Cullinane, manager of Kayleigh Cullinane and X Factor star, Mary Byrne (who both feature on the album), said:

“Brian has been an incredible ambassador and supporter of both up-and-coming talent and established artists. Every show he produces is top quality—a true professional. His attention to detail is second to none to ensure a fantastic experience for both the artist and audience.”

Cliona Hagan, said, “I really am delighted to be part of this wonderful album where country music is greatly celebrated.”

“Brian is a lovely guy and so enjoyable to be around. I was over the moon when he asked me to be part of the album.”

One of Ireland’s most loved entertainers, Louise Morrissey has been touring with Country Shows since its inception. “When Brian told me of his plan to release an album with songs from the artists he has worked with throughout the years, I was more than happy to be included on the album.”

“I have worked with Brian for around 20 years and we have become great friends during that time. Also, I wish him every success with this fantastic album. I look forward to working with Brian for many years to come.”

He said: “It has been a pleasure working with Brian for 20 years and I am thrilled to be part of the CD. Brian’s support to the Irish country music industry and artist is invaluable.”

Aidan Quinn, son of Philomena Begley, has music in his veins. Aidan is seen as one of Brian’s most trusted advisors and has been influential in the success of Brian Cunningham Agency over the years.

He said: “I have worked with Brian for over 20 years and I can honestly say in that 20 years we have never fallen out.”

“Brian and his organisation are true professionals. I have learned a lot from him. He has been so kind to me and my family.”

“I’m honoured to call him one of my closest friends. If you ever have a problem, he’s the man to go to… a great listener.”