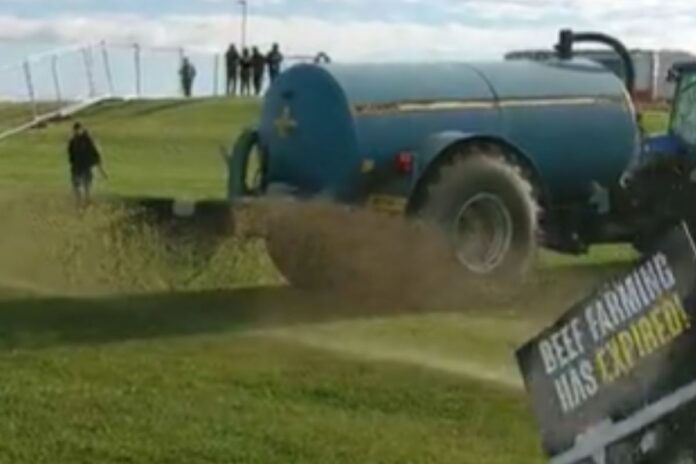 A group of animal rights activists claim they were “sprayed with manure” by farmers at a flagship beef expo in the UK yesterday (Saturday, May 28th, 2022).

Animal Justice Project staged a protest at the National Beef Association’s 2022 Expo, which pedigree and commercial breed societies view as a “major showcase” to promote the quality of their cattle.

The industry event, which the NBA hosts at Darlington Farmers’ Auction Mart, is the “largest of its kind” in the UK.

Organisers welcome industry leaders, DEFRA representatives and 5,000 beef farmers through their gates for this event.

The organisation claims that an individual drove a tractor into them “spraying manure over” them.

The organisation also claims that another farmer used a JCB digger to “reach protestors on the roof and chased them around”.

This resulted in an activist “falling and dislocating her finger – she was taken to hospital”.

Mark Dent, the mart chairman, slammed activists’ behaviour. He told The Northern Echo that he “has no time for protestors who cover their faces, trespass and commit criminal damage to get their message across”.

“The police will not remove them because they say how can we do that without putting themselves at risk.”

“And they said they will not come down willingly. Therefore, they cannot forcibly remove them without putting them and the police at risk.”

“Protesters’ actions are not spoiling the day and that their message is falling on deaf ears here.”

He branded the group’s actions as ‘a publicity stunt’. He told the publication that “farmers attending the Expo are simply laughing at them”.