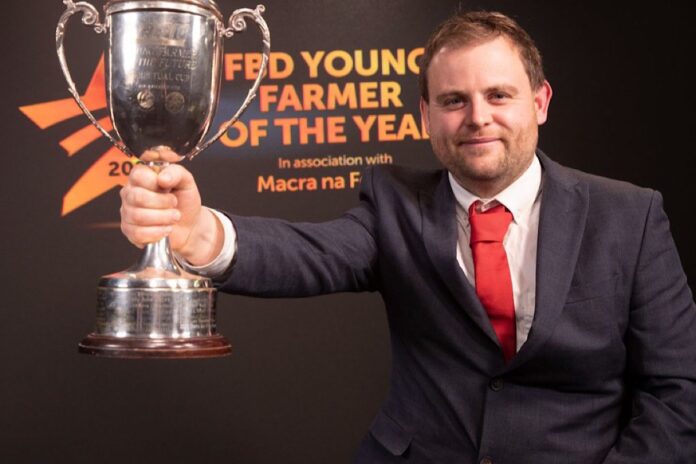 In this week’s dairy segment, That’s Farming, profiles the 2021 FBD Macra na Feirme Young Farmer of the Year, Owen Ashton. The farm manager discusses his farming experience in North Wales, using four bulls and AI, calving heifers at 24 months and his aim for 500kgs of milk solids and a 190-cow herd.

Owen Ashton manages a 180-cow herd in Castlelyons, County Cork and was awarded the 2021 FBD Macra na Feirme Young Farmer of the Year title for his work on the 58ha farm.

The enterprise – which employs one weekend worker – consists of 180 cows: 70% Friesian and 30% Jersey-crosses.

The Navan, County Meath native owns 150 of these cows, with 30 owned by the farmer leasing the farm and 20 leased out to a Tipperary farmer.

He developed his love for farming on his uncle’s dairy beef and sheep farm in North Wales.

“I just loved farming, and I got it through working on the farm with my uncle during the holidays. So, any opportunity I got, I went to work on the farm,” he told That’s Farming.

“I also did a degree in agriculture in Wales and went out to New Zealand and got into dairy farming that way,” the farm manager explained.

Owen studied for a four-year degree, which included a one-year placement, in agriculture at Aberystwyth University.

He worked on a 500 Kiwi-cross cow dairy farm in New Zealand and on a 1,200-cow Kiwi-cross enterprise in Wales during his work experience. 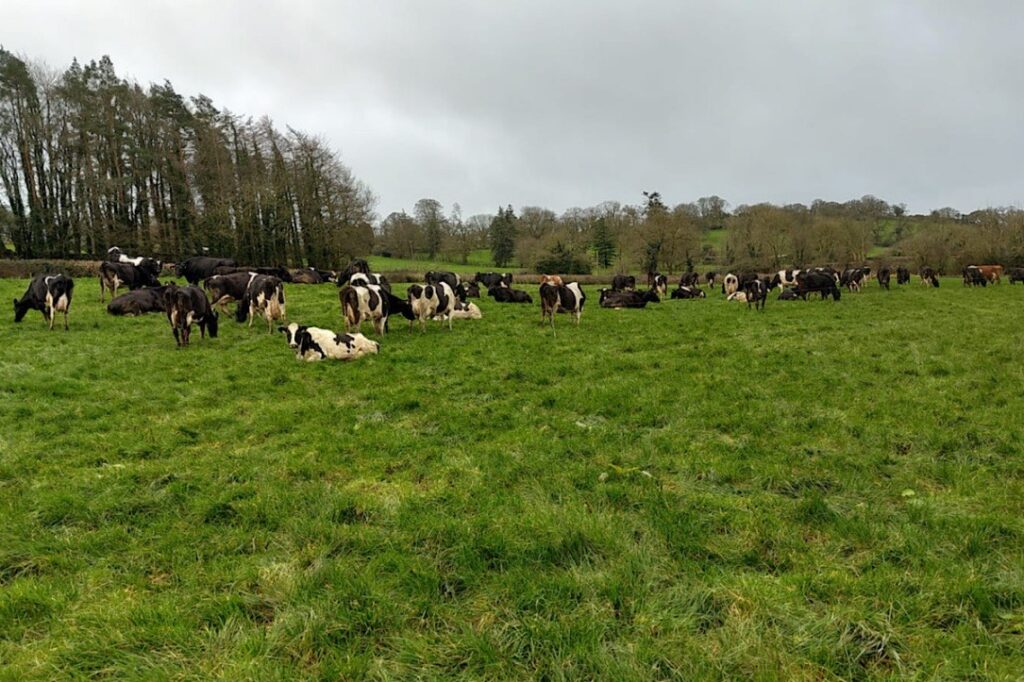 “They are a touch smaller than the Friesian. They give you what a Friesian gives you, but they are probably lighter and give you better milk solids and fertility.”

Owen achieves the above performance data by feeding 750kg of concentrates per cow.

Owen AIs his heifers on the one day to dairy sires as part of the farm’s synchronisation programme.

This is then followed by five weeks of beef sires and mopping up with five Friesian stock bulls over four weeks.

“We rotate the bulls. You might have two bulls on one day and two on the next day. The fifth bull is with the second herd, so he is a spare bull if the others get injured.”

“Those four bulls that we rotate serve the main herd, but 90% of the main herd would be in-calf. There are only 20 cows for them to serve.”

“There are lots of straws coming from the same bulls, which would be worrying.”

“I would nearly say they would want to slow down on genomics for a couple of years to see if everything is working the way it wants to work and if they are performing and doing what you think they should be doing.”

Owen calves his herd over 12 weeks from February to the beginning of April.

“In my opinion, it is the most efficient time on a grass-based system to have all your cows calving in a short tight window in the spring to utilise grass for the season.”

Commenting on his system of calving heifers at 24-months, he said:

“If you keep them for an extra year when you can prove you can calf them at two-years-old, then you are wasting your time because they get too fat in the last year. Two-years-old is the only age, really.”

According to Owen, the herd’s calving interval is 365 days, and he uses a calving camera to monitor this period.

He advocates a strict culling policy and replaces 15% of the herd. He sells the remaining females on-farm from two to three-weeks-old.

Furthermore, he sells some of his Friesian bull calves on-farm or for export when they are two-weeks-old.

The farm manager sells his beef-sired calves on-farm at 2-weeks or in Fermoy Mart or Corrin Mart when they are 3-weeks-old. 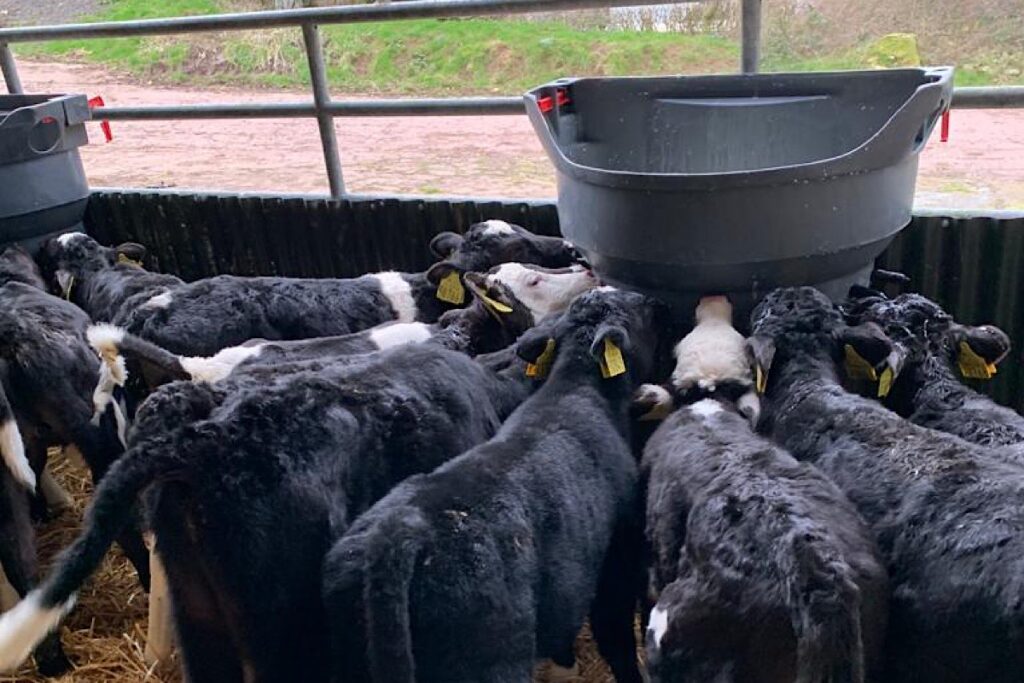 Owen measures grass every five days during the summer and once a week during other months.

“We spread lime on parts of land that need it and soil test our land most years.”

Owen milks in a 20-unit DeLaval milking parlour that came with the leased farm. “It takes two hours in the morning and an hour-and-a-half in the evening,” the farm manager explained.

Other infrastructure include a 170-cubicle shed fitted with Dairymaster Clean Sweep automatic scrapers, a 60-cow cubicle shed on an out-farm, calving facilities and sheds for up to 180 calves.

Environmental-related challenges, staff availability, and rising input prices are among the challenges Owen faces in the sector.

“Someone like myself who does not have a farm and is trying to lease a farm has the challenges to access to finance and trying to find a farm that they would not have to put too much capital expenditure into.”

“The farm’s stocking rate is about right for the farm, and it should grow about 14t of grass.”

Owen intends to find a farm to lease. His aim for the Castlelyons-based farm is to produce 500kgs of milk solids per cow, at 3.9-4.0% protein, maintain the herd size, install an automatic drafting system. and introduce more clover into grass swards.

“Dairy farming is relatively good. There are a lot of changes going on at the moment, but I think the goods still outweigh the bad. There is demand for dairy products here and worldwide.”

“It is viable because it is the best agricultural business to be in. Milk prices have been exceptional over the last two years, but all the other input costs have been high.”

“Dairy farmers will survive to adapt their businesses and be able to adjust costs and follow dairy farming trends in terms of having good genetic merit cows and following the base price. So, I think there is money to be made”.

“Farmers that do not want to adapt to it is probably the people that will struggle the most.”

Owen shared his opinion on the discussion around reducing the national herd.

“I would not get caught up on things like reducing the national herd until it is passed. In my opinion, there is no point worrying about things that you cannot change or influence what is going to happen.”

“In my view, it is probably going to happen in terms of cutting down cow numbers, but it will mean people will have to adapt their farms to new criteria.”

“I still think there is money to be made, and dairy farming is viable,” the Green Shoots dairy group member concluded.