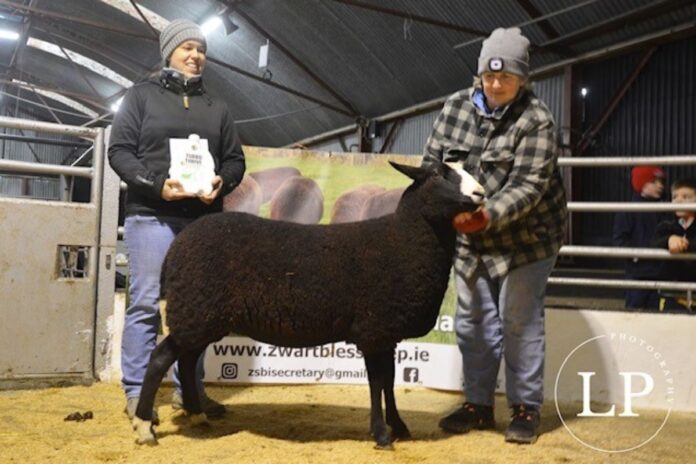 A “stylish” hogget, Brandon Josephine, from the flock of Nesta Fitzgerald, has set a new Zwartbles female breed record price.

She changed hands for €1,500 at the inaugural ZSBI (Zwartbles Sheep Breeders of Ireland) sale in Tullow, Co. Carlow, on Saturday, November 19th, 2022, and now heads to Oakvale Zwartbles, in Co. Cavan.

Other leading prices on the day included €850 for a ewe lamb from the Cummerhill Zwartbles flock.

She makes the journey to Westmeath, where she joins Laura Cotterill in her newly established Almoritia Flock.

Another new breeder from Tipperary, Aidan Ryan, from the Elm Hall flock, secured the third highest-priced female on the day, while a ewe lamb from the Woodfield flock reached €800.

“It was a very successful day at the first ZSBI Sale in Tullow, Co. Carlow.”

“Quality lots met with a strong trade, culminating with a new female breed record being set for a very stylish hogget.”

“Thank you to all who supported the sale and to Tullow Livestock Sales for hosting us on the day.”

“Thank you also to Lauren Payne Photography for some great photos and to our sponsor, Man & Beast, for their support,” the spokesperson concluded.

The group advises purchasers to seek the following traits in Zwartbles sheep:

Earlier this year, we featured an article from the group’s Ronan Lally, who discussed the Zwartbles Sheep Breeders of Ireland’s emergence as “a united and strong organisation to take its rightful place amongst pedigree and commercial domains on the island of Ireland”.

You can read more on this article.