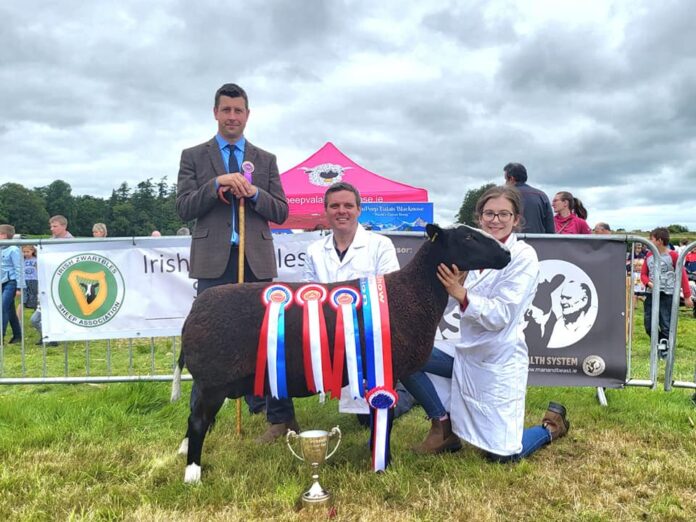 Conroy sweeps the board at Zwartbles championship in Clonmel

Clonmel was the venue for this year’s Irish Zwartbles Sheep Association’s All-Ireland Championship.

With nearly 70 sheep entered,  judge, Peter Addison of the Hayberries Zwartbles flock, was tasked with working his way through numerous classes.

With a large crowd in attendance, Mr Addison tapped out Cernyw Gwawr from the Twilight Blaze flock of Paul Conroy as his female champion.

Colin Stephenson of the Woodfield flock followed up as reserve female champion with The Fort 19J.

In the male section, top honours went to a ram lamb, Allstar Kingsman, from the Allstar flock of Jimmy and Maria Smyth.

For the overall championship, Mr Addison had a tough decision to make. However, in the end, the senior ewe of Paul Conroy, Twilight Blaze, reigned supreme. Thereafter, ram lamb winner, Allstar Kingsman, Allstar Zwartbles, was hot on her heels.

Addison commented that he was “highly impressed with the quality of stock on show”.

On his choice of champion, Addison said that she caught his eye as soon as “she stepped in the ring; with her style and power, she was a worthy champion”.

The IZSA said they were “delighted” with the large turnout of sheep and thanked all exhibitors for “making the day so successful”.

They also gave special thanks to Clonmel Show for hosting their All-Ireland Championship.

A spokesperson for the IZSA told That’s Farming that “the quality of stock on show was a credit to all the exhibitors”.

The next official date in the IZSA calendar will be its premier show and sale at Tullamore Mart on Saturday, August 20th, 2022.

There will be stock for sale from many of the flocks that scooped rosettes on Sunday in Clonmel.

That’s Farming also understands that the two Zwartbles societies in Ireland, the IZSA and Zwartbles Eire, are planning to amalgamate under a new society.

A source has exclusively informed the publication that both groups will form the Zwartbles Sheep Breeders of Ireland (ZSBI) with a planned launch at the National Ploughing Championships, which will take place at Ratheniska this September.