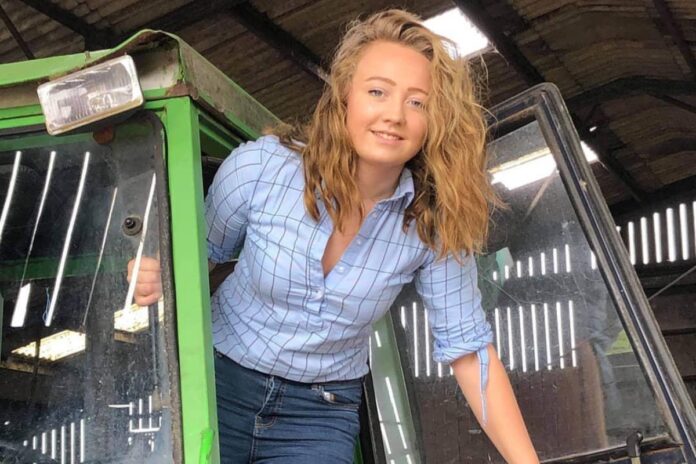 Coming from a background of pit labourers and nurses and growing up in a terraced house in the city is a far cry from Amy Donkin’s current sheep farming life.

Although farming does not run in the County Durham native’s family, she has embraced farm life to its fullest, having moved to Teesdale, England, around fourteen years ago.

She told That’s Farming: “Some of my earliest memories involve helping my stepfather with his sheep when he met my mam. I was bitten by the farming bug from then.”

“My mother and stepfather met when I was six-years-old, and he had very few sheep at the time, about 20.”

“Farming has always drawn me back in with a calling for it; we have no idea where it came from.

We had a handful of suckler cows in the past. Currently, we own one pet cow; she is called Hope, after the place where we live.”

Amy commenced employment at a well-known agricultural supply store and farming part-time on the current holding she acquired through word of mouth.

“Despite this, we are on a BFA tenancy. My dad asked the owners if we could let the farm; we have great landlords who are farmers themselves.”

Following this, she returned to her studies in Askham Bryan to top up her degree to an agricultural management degree.

In addition to this, Amy completed a transport of animals and sheep dipping course and obtained her trailer licence.

Her holding is in Hope, near Barnard Castle, County Durham. The family rents 120-acres, with 60-acres at home. The land contained in this holding is scattered through County Durham, Darlington, and North Yorkshire.

Amy, her stepfather, Stephen, sister, Izzy and mother, Hilary, are all involved in the running of the sheep enterprise.

Amy manages her flock under the name: Baarbarian Livestock, while her stepfather and sister also run a separate flock, known as West Hope Flock. 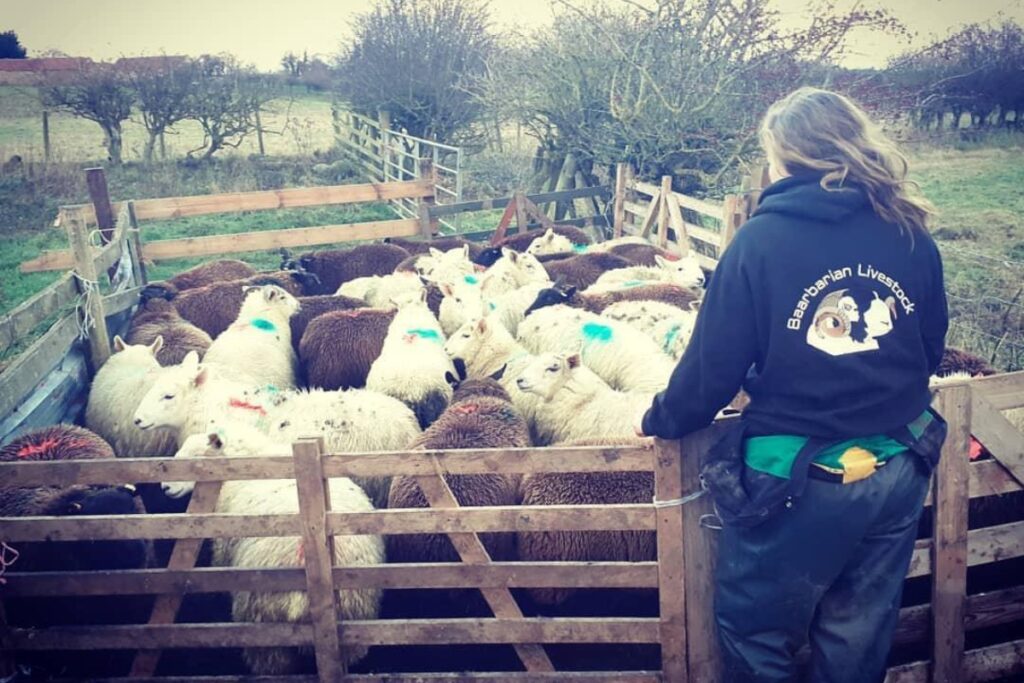 Amy chose Cheviot-crosses as the predominant breed within her flock.

“We cross a mule with a Cheviot. This makes for a very big, framed ewe that can deal with being over 1,000ft. They look after themselves and get on with lambing.”

“Meanwhile, my dad has his pedigree Dutch Spotted, which are well-shaped sheep, good mothers and very quiet. We cross these onto our Cheviot-crosses and continentals.”

In terms of an ideal breed, Amy prefers Cheviots and Dutch Spotteds for several reasons.

“Cheviots are a very hardy breed which produces good store lambs. They are good mothers too. Dutch Spotted are good mothers, lambs are vigorous and are sucking straight away, they also produce very good lambs and replacement ewes.”

Furthermore, she built her flock slowly through the years by initially purchasing five ewes from a local farmer and building year on year. 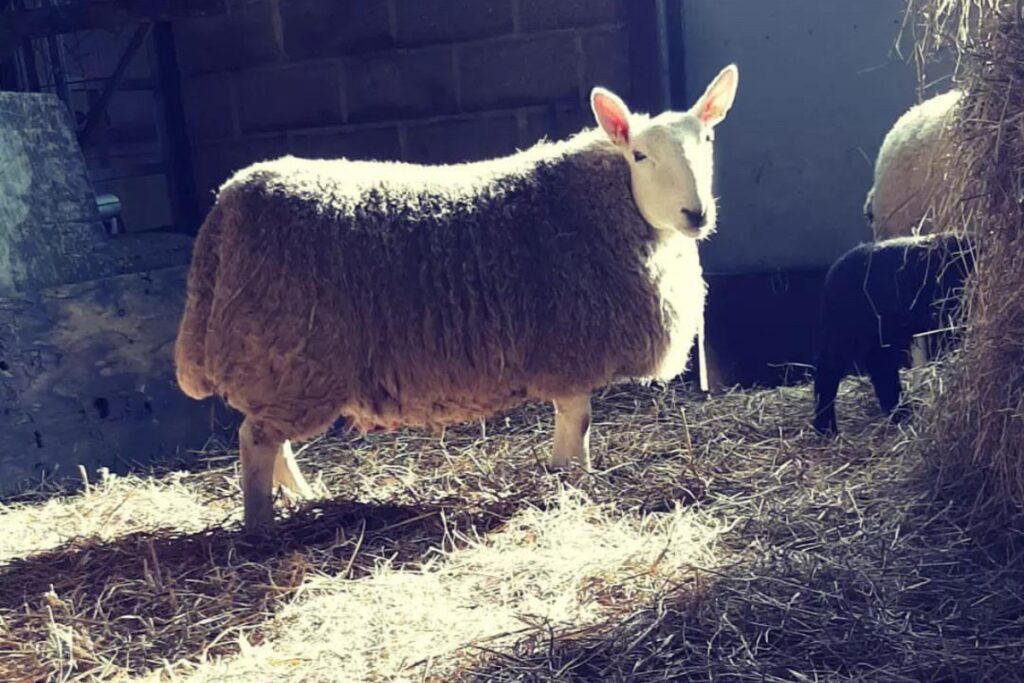 Baarbarian Livestock and West Hope Flock comprise 200 sheep with lambs at foot, with 140-150 of these being breeding ewes.

“We took a different route this year and lambed in three periods, commencing from the start of February, end of March and again in April. They are lambing within 1-2 weeks at a time.”

Lambing takes place indoors for the flock, with no use of cameras.

“We lamb in early February for the pedigrees, and we usually lamb during the school holidays for my sister in March. The hill-crosses lamb better around April time.”

To achieve a compact lambing period, Amy uses sponges and PMSG, which have worked “well” for the flock and made it easier to split them into groups.

Predominantly, she sells the lambs off as store lambs. This year, she intends to sell her gimmer lambs for breeding purposes.

“We sell the pedigree Dutch Spotted at tup sales and retain ewe lambs. We strive to have a hardy, well-rounded type of sheep that can take the weather of surviving in the hills, which is a must.”

“Quiet traits are a bonus as it makes life just that bit easier when it comes to handling the Dutch Spotted sheep.” 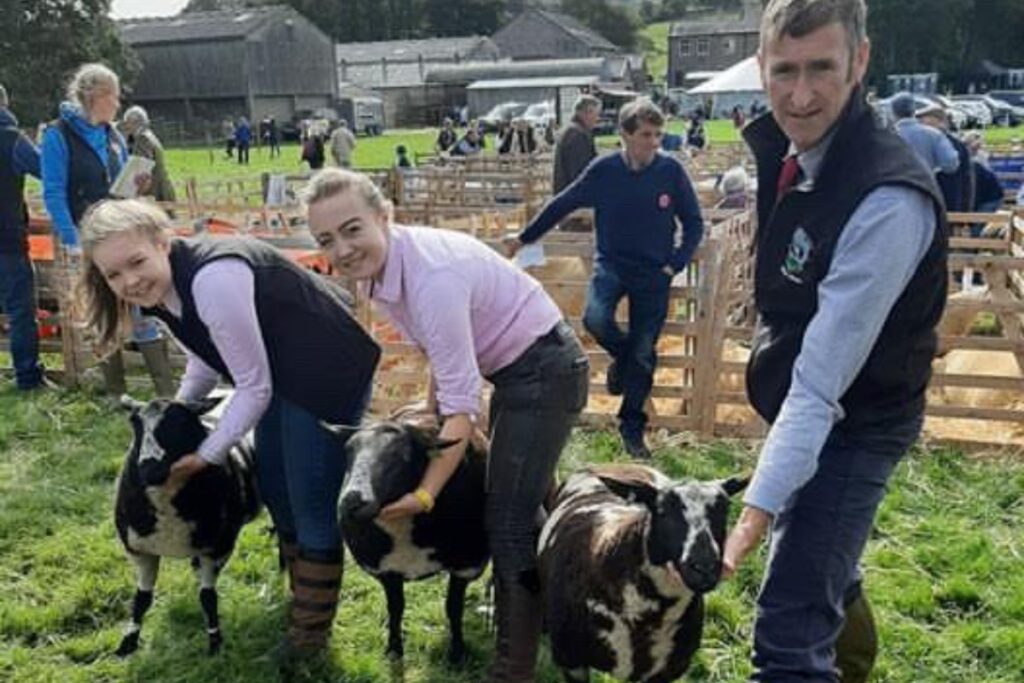 Adapting to life on the farm

For this young farmer, the most enjoyable part is seeing the flock grow from originally having only a small number and seeing the hard work pay off from the decisions she makes.

“I would say that farming gets you up every day, and there is always something to do,” she told this publication.

Like many farmers, Amy struggles with the financial burdens and challenges facing the agricultural sector.

She thrives on the concept of keeping both breeds and traditions alive by adjusting these with modern-day farming.

“I believe it is important to keep the knowledge and experience relevant as it helps with farming today. It is also vital to push for the next generation to be able to carry on farming.”

“The farm plans involve breeding sheep to sell at breeding sales, as we are not at an amount whereby we do not need to retain as many ewe lambs and can profit more from the flock.”

She plans to have a pedigree flock of Cheviots and Valais Blacknose in the future.

“Sheep farming is becoming a very difficult business, and as it stands, I would say farming on a large scale is viable.”

“However, on a smaller scale, being more selective with breeds would make it a more viable business.”

Amy advises aspiring sheep farmers “to do what you are passionate about and go with the breeds you are really interested in”. “Follow your gut as sheep farming is a game of taking chances.”

She concludes: “I started from a terraced house in the middle of a town, with no background or generational farm passed down. We now have a tenanted farm with 200-strong sheep, and the passion for farming has never given up.”