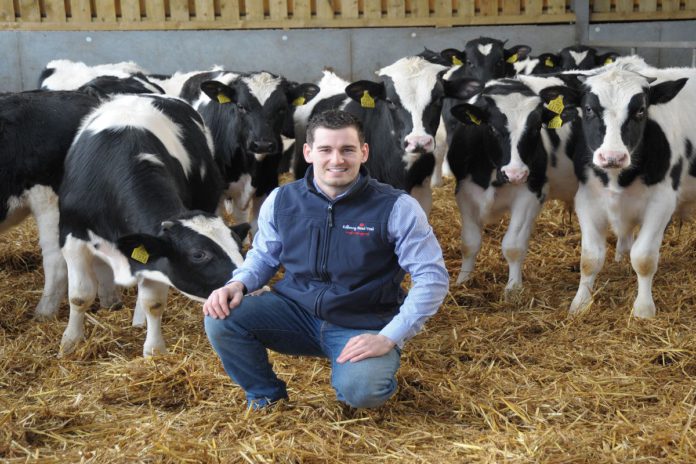 His enterprise is based in Windgap, Co. Kilkenny, where he farms alongside his father.

While Jack was studying rural enterprise and agribusiness in GMIT/Mountbellew, the duo established Kilkenny Rosé Veal. The Madigan family previously grew 160-acres of miscanthus, which was used as an energy crop in Edenderry power station, where it was mixed with peat to produce electricity through combustion.

Around two years ago, Edenderry power station stopped the renewal of their contract with the Madigans, as they decided to import wood chip from other countries instead.

“It’s kind of ironic at the moment that everyone is talking about reducing the national herd and saying agriculture will have to diversify to renewable energy crops,” he told That’s Farming.

“We have been growing renewable energy crops for more than 10 years and yet there is no market for them.”

This left the pair with a decision to make and they decided to start a dairy enterprise. They had 160-acres of land in miscanthus and chose to turn 100-acres into a milking platform. The remaining 60-acres of miscanthus are used as bedding for their cows.

“We always thought the farm would lend itself to be a good dairy farm.”

“The thinking behind it was, we already had a market for the calves, and we could use the 60-acres of miscanthus to bed the cows,” Jack added.

A Lely Astronaut A5 was installed in an existing shed, and the use of the miscanthus as bedding for the cows meant that they did not incur the expense of building cubicles.

“We liked the Lely Astronaut because it had all the information such as cell count, feed-to-yield, heat detection and different things like that.”

“It’s not as expensive as everyone thinks, when you break it down to what you’re getting and maybe what you might save on building costs and other kinds of infrastructure and the information you’re getting back.”

70 heifers were sourced both locally and internationally – 35 Friesian-cross heifers were acquired locally in Kilkenny and the other 35 are pedigree Fleckviehs, which were imported from Austria and sourced through Fleckvieh IRL in Kilkenny.

“Fleckviehs are basically milking Simmentals. They looked like they had good potential and rather than having all our eggs in the one basket, we bought half Fleckviehs.”

Jack highlights the advantages that the Fleckvieh has in comparison to the conventional dairy breeds, such as their calves being more suitable to beef, a higher cull cow value, good fertility and high longevity.

The robotic milking system is limited by the number of cows per machine, but the Kilkenny man believes the Fleckvieh helps counteract this problem. “It’s not like where you can run an extra 20 cows into a parlour, you can’t do that with a robot.”

“I think the robot and the Fleckvieh are a good match and seem to complement one another,” he added.

The earlier-calving Fleckviehs are currently producing an average of 30-litres per day. They’re expected to produce 8,000-litres a year with 750kg of milk solids.

The transition to dairy has not made a huge difference to their everyday lives, according to Jack. His father was a suckler farmer all his life and similarities can be seen between the two farming practices when you bring the robot into play.

“If you had sucklers, you’d still have the job of calving the cow, looking after the calf and all the rest. The fact that the robot is doing the milking for you and you’ve to do the day-to-day stuff, it’s not completely unlike suckler farming.”

The veal enterprise is still running alongside their dairy enterprise and the Kilkenny duo finish around 200 animals each year. Kilkenny Rosé Veal distributes their produce to hotels, restaurants and butchers across the southeast.

Rather than exporting calves to mainland Europe for veal production, Jack believes there is an opportunity to grow the market here in Ireland. “The problem is the market is incredibly small in Ireland and it needs the push of Bord Bia and the higher powers.”

“You’d produce three veal animals while you’d be producing one beef animal, there’s lower CO2 and inputs as they have a much better conversion rate.” Jack concluded.