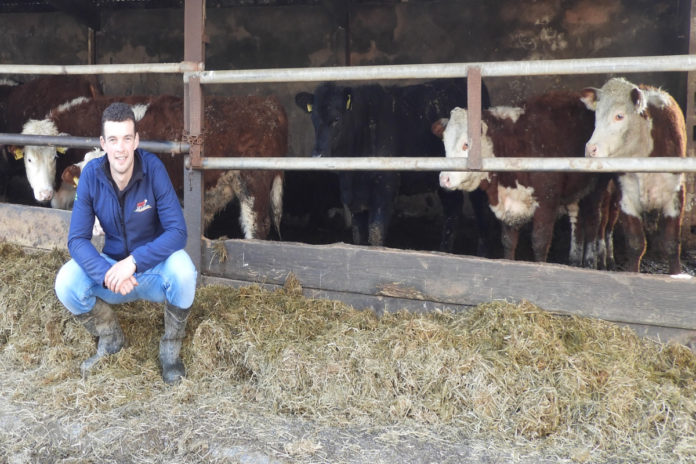 Moving from dairy to suckler farming

Farming in Droumdaniel, Bantry, Co. Cork, the Lynch family went the opposite way to many farmers in recent times, having moved from a dairy herd to sucklers and run a herd of pedigree Hereford cattle also.

Eoin Lynch spoke to That’s Farming about his farming experiences, his involvement in the Irish Hereford Breed Society and the Young Handlers’ Competition at the World Hereford Conference.

When Eoin was young, the family used to milk 25 Friesian cows but decided to convert to beef farming around 2008. They started finishing heifers and building up a pedigree Hereford herd.

“The quota was kind of holding us back. My father always used to run a Hereford bull with the cattle, and he kept a couple of pedigree cows since the mid-80s.”

“When he decided to get rid of the Friesian cows, he started to increase in the sucklers. Eventually, the Herefords squeezed out the rest of the cows and it’s nearly all pedigree cattle now.”

“I suppose the main reason behind the Herefords is their docility and the quality of their meat is a big part of it too. They’re a breed that can do most things for you and they suit our climate here in Ireland.”

They now run a herd of 35 pedigree Hereford cows and 5 Angus on just over 160 acres. His father, Eugene, works full-time on the farm with support from his wife, Joan, and Eoin’s siblings, John and Clodagh.

They start breeding in November/December to calve their cows from July through to September. “We’re trying to get our bulls to good enough size to sell to the dairy farmer this time of the year (March).”

“So usually when we get them to a year-and-a-half, they’re ready to bull a herd of cows. That would be our reason for calving at that time.”

Droumdaniel Herefords is the name of the Bantry family’s pedigree herd. Eugene Lynch got involved with the society back in 1984 and is a former president. Eoin has carried on the tradition with his society involvement.

“We’ve always been around it. We have our own branch here in west Cork with about 25 members so, we would have regular meetings and there’s always someone from our club on the council,” Eoin told That’s Farming.

“We’re hoping to start up a youth club within the society now. That’s what the idea of going to New Zealand was partially based on.”

“It would get us up to speed of what other countries are doing and hoping that we could bring a few ideas back from New Zealand.”

The 23-year-old was the leader of Team Ireland in the Young Handlers’ Competition at the World Hereford Conference, which was held in Queensland, New Zealand from March 7th-14th.

“The main thing I got to see was how Herefords were bred across the world and in different climates.”

“Every country there seemed to have a completely different setup. There was one farm in New Zealand who had 700 cows and only 600 bales of silage was all he needed. It was a real eye-opener to see how they managed things differently.”

“There was a team of us out there and any of the four of us could have been picked as captain, we’re all as good at representing the society as each other and the competition was the best thing I ever did.”

“I came home and I was trying to convince my parents to go on a conference tour or something because it’s a great way to go see things.”

“We were meeting people from all over the world with a common interest and we were all learning from each other.”

“Everyone was just so good to each other out there and they were welcoming us back if we ever wanted to come back.”

The Cork-man thanked Slaney Foods for providing delegates with the opportunity to travel to overseas. “They were a massive help in getting us out there, there might not have been any team only for them. There was a lot of work from all the society members as well, especially Louise Callan.”

“I want to congratulate Larry Feeney as well for becoming Secretary-General of the world. That’s a massive achievement for Irish Herefords to be recognised on a worldwide basis.”

“Speaking to a lot of different people at the conference, the Irish Hereford Society is really well known and a lot of people look up to us.”

“The Hereford Society is a great society to be involved with and hopefully, if we can get our youth club up and going, we can contend with the world.”

If you are a young farmer and want to share your story, email – [email protected]farming.com