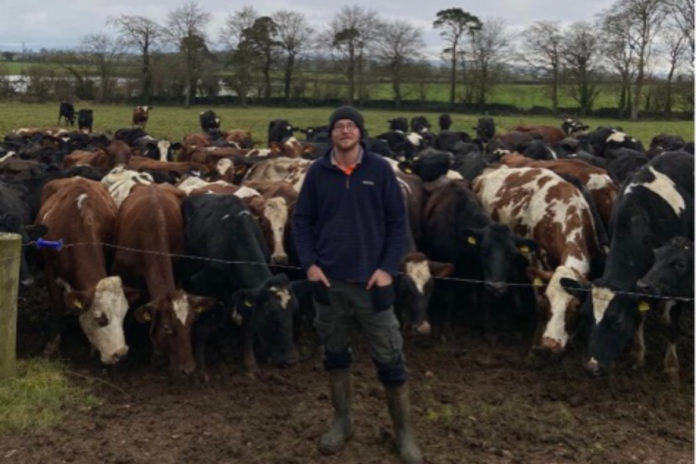 24-year-old, Limerick-native, Hugh Massy, is a third-generation dairy farmer who entered a full-time partnership with his father James, in 2020.

He owns two-thirds of the home farm, located just outside Rathkeale, Co. Limerick. The 328-acre farm comprises 270-acres of grass; the remainder is woodland and farm infrastructure.

Hugh, the eldest of three sons, explains; “I came home and took over the day to day running of the farm. I make most of the decisions on the farm, alongside my father. Dad and I are the full-time labour units. The brothers, Luke and David, help during calving and at weekends.”

The Massys have been dairying since 1974 and to facilitate expansion, a land rental system has proved fruitful. They previously reared replacement stock at home, but they now graze in North Kerry, where a farmer there looks after them and is paid for his input accordingly.

Adopting this system allowed for a growth spurt from 130 cows in 2003 to a notable 240-cow herd in 2019. The family milked 270 cows last year, and are milking 335 cows on the farm at present. The evolution of the farm continues; efficiency is at the forefront of its development. 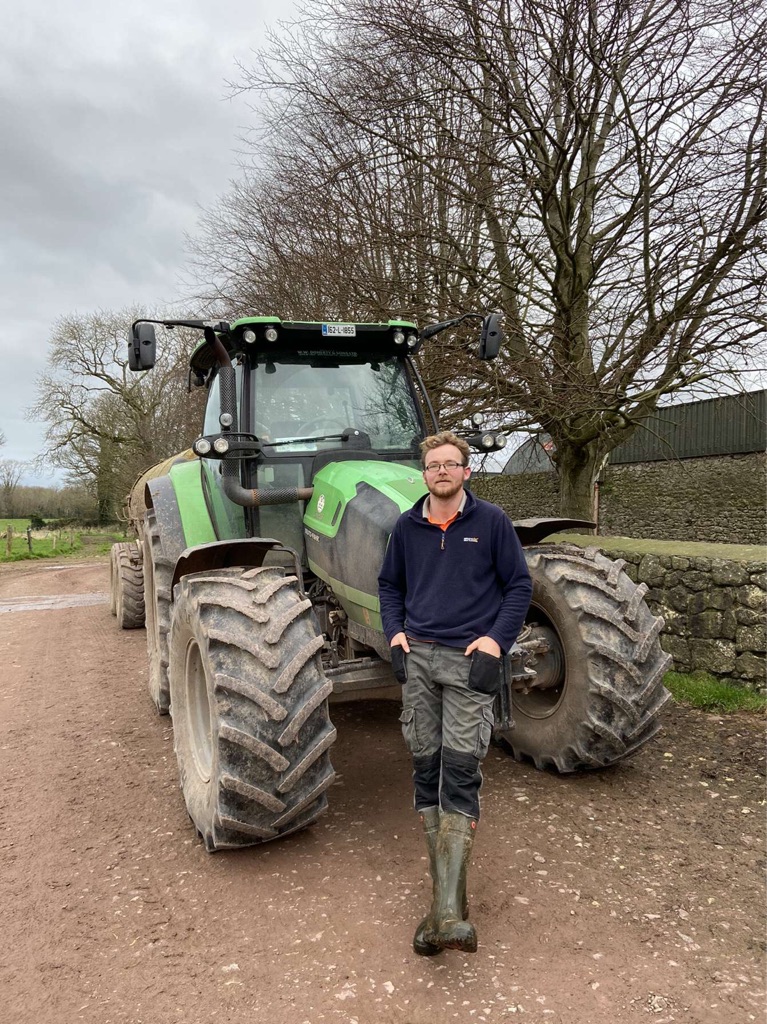 Educated and experienced, the 24-year-old completed an Advanced Certificate in Dairy Herd Management at Salesian Agricultural College, Pallaskenry. In 2016, he spent six months in New Zealand, at the height of the calving season. He has had a full-time role at home since mid-2017.

The farm is set-up to facilitate a long grazing season, making efficient use of the grass available.

“We milk late calvers and empty cows throughout the winter. Our grazing season is quite long; the cows are generally housed full-time for December and January. They are out by day at the end of January and full-time from the March 1st, 2021, weather dependent.”

The herd is housed in mid-October by night and graze until December 1st by day. This year the cows have been out by day since January 28th, 2021.

The Massys make breeding selections to set up as efficiently as possible, from calf to cow. Their breed selection has evolved over time.

“Up to the early 2000s, we milked a Holstein herd and began crossbreeding from then on. Today, most of the cows are Jersey/Friesian crosses with some Norwegian reds thrown in. We breed all our own replacements to keep a closed herd.”

“We select high-E.B.I. bulls from Munster AI to improve on traits that are lower in the cows. For example, our fertility is high, so we would concentrate on selecting bulls with traits for slightly higher milk production.” All bulls selected are easy calvers.

They wean replacement heifers at 8-10 weeks and go to the rented farm. These heifers come home a month before they calve down at 22-24 months old. They have been covered using AI over three weeks; then, a Friesian bull is released for seven weeks.

“Strategically, breeding started on April 15th,  2020. This was two weeks earlier than normal. I want to achieve 500kgs of solids per cow, by getting cows calved and out to grass early”, the young dairy farmer adds. 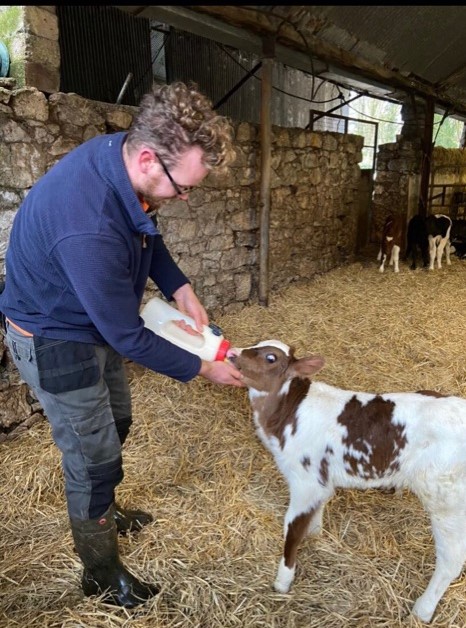 By increasing their herd size drastically over the years, the Massys have had to implement new technologies and equipment.

“We’ve decided to expand and go the rotary route. I have such a keen interest in farming; I hope to have a long future ahead. Our old 12-unit double up parlour is taking a lot of the day to milk the cows. As of February 5th 2021, we had 165/303 cows calved. It’s taking 3 hours in the morning and evening.”

“We are currently putting the finishing touches on our new 50-unit Milfos rotary parlour. We would hope to be up and running late this month or early March. The new rotary includes an automatic drafting gate, so we don’t have to leave the pit during milking.”

“A cubicle house for 140 cows is also in the pipeline once we hopefully receive a grant. As our home facilities are limited, it takes time out of the day travelling to this farm. I would also plan to build a new calf house in the coming years that includes automated calf feeders.”

Currently, the Massys spread their own fertiliser and most of the slurry on the farm. Long term, Hugh hopes to contract out most of this work to allow more time for cows and grassland management. 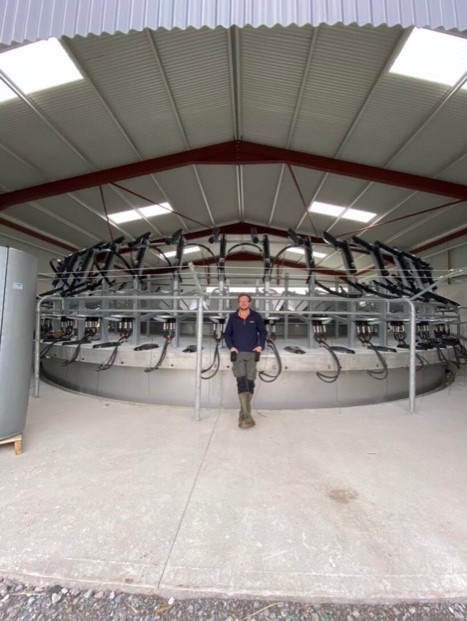 Massy believes in the importance of grassland measurement and monitoring growth. He uses Pasturebase Ireland as a tool to do so.

“I am big into grassland measurement; I walk the farm weekly during the grazing season. I would like to reseed large portions of the farm. Furthermore, I would include more clover and new grass varieties so we can reduce our use of artificial fertilisers.”

This has the added benefit of reducing the input costs of fertilisers and reducing carbon emissions.

“I also hope to look into more opportunities to rent/lease more land near the home milking block. That way, I can expand the herd. The rotary will allow for substantial expansion in cow numbers.”

“I am optimistic about the future of dairy and will always be willing to expand if the opportunities arise. Long-term, Id’ possibly look to set up a second herd if a farm could be sourced.”

“If your head isn’t 100% in it [farming], it’s probably not for you. Research into it and know that it is a tough job that takes a lot of dedication. Don’t be a busy fool. Make the operation as efficient as possible; labour is a big expense.”

The future of dairying

As a 24-year-old full-time dairy farmer, Hugh puts it very plainly and simply.

“It is very important for the older generation to give the new generation an incentive for them to drive on. For example, handing over part or all of the farm and letting them be involved in decision making. If they are given responsibility, they will have the drive.“ concludes the young dairy farmer.