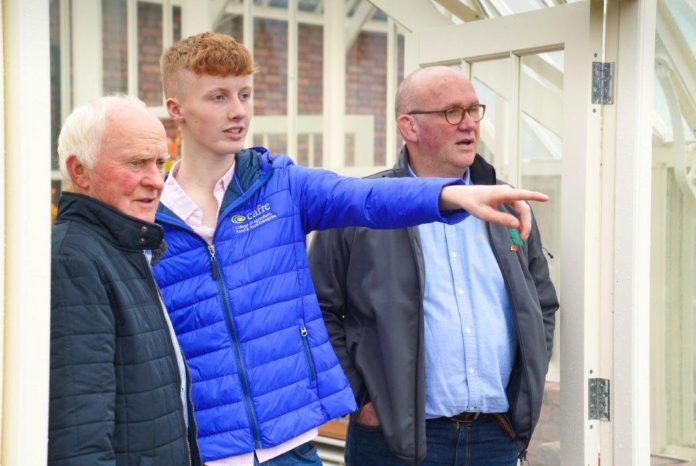 Today, I am meeting three generations of the Wright family who have been part of the fabric of the local agri-food industry for many years.

As I listen to father, son and grandson/nephew, I hear their passion for their different but connected careers and life choices.

From Jim Wright, I hear about his love for dairy farming. His son, Mark, is determined to drive forward the relatively young family business of farmhouse cheese production under the Ballylisk brand.

Jim’s grandson and Mark’s nephew, Matthew, is equally enthusiastic as he talks about the new horticulture course he began in September. He began the course after leaving school in June and discusses the opportunities opening up for him through his new online business.

This story is even more interesting for me because each one of them is connected to the College of Agriculture, Food and Rural Enterprise. They all tell me that the college has shaped their lives for the better without exception.

A visit after 60 years

Jim Wright came to Greenmount College, as it was back in 1962, as a fresh-faced 17-year-old.

As we walk around the campus, almost 60 years later, he points out his halls of residence, which coincidentally is where Matthew now stays.

He tells that there were 80 students at the college, of which two were girls, and he welcomes the fact that CAFRE now has almost 1900 agriculture students, 850 of which are females.

He appreciates the diversity of skills they can bring to an evolving and changing agri-food industry.

Jim reflects on the fun and valuable learning experience at Greenmount in the 1960s. He studied for a year and enjoyed being part of the rugby team, remarking that his whole experience was character building.

Modestly, he shows me a photo that hung in his family home until quite recently.

It was taken in 1963, just before he left the college. He had been awarded first place in Dairying and used his prize money to travel to Denmark and Sweden for three weeks, where he saw a bit of farming life abroad.

As one of CAFRE’s alumni, he has returned to the campus a few times over the years. I can’t help noticing how pleased he is to be returning now as the grandfather of one of our current students.

I rarely meet anyone who talks as passionately about their business as Jim’s son Mark.

After returning to the family business from a life in the public sector, Mark tells how he and his brother Dean, set up Ballylisk Dairies in Co Armagh.

However, Mark testifies that their signature cheese only became a reality because of the support and knowledge they received from Gary Andrews. The cheese started as an idea around the kitchen table.

At that time, Gary was a leading Dairy Technologist at CAFRE’s Loughry Campus in Cookstown. Gary guided the Wright family through the highs and lows of product development.

Mark laughs about how he thought that the first trial run gave a satisfactory product, but Gary’s experience and skills meant that he was disappointed and was determined to try again to make a better cheese.

Mark also shows his full appreciation of the Innovation Voucher Scheme funded by Invest NI. He is grateful that he received public funding to help him launch his business and his product.

However, he reflects that he got so much more out of the experience than just a business proposition.

By spending time in Loughry’s Food Technology Centre, he absorbed knowledge and skills, learned about the culture of the local industry and built life-long friendships with the staff in CAFRE.

Under Mark’s direction, the family cheese business is going from strength to strength. They have developed a smoked variation of the Ballylisk cheese. He shares his plans to launch a speciality truffle variation of the Triple Cream Cheese in time for Christmas.

Mark knows that these students are getting an excellent opportunity to learn about cheese-making during their placement.

However, he also acknowledges that he benefits from the technical knowledge that these vibrant young people have brought into his factory.

And that is why he gives the assertion that 2022 will be his year to focus on people development and the career opportunities that Ballylisk can offer.

Matthew Wright is studying a one-year Level 2 Diploma in Practical Horticulture Skills. As we walk around the grounds of Greenmount, he stops here and there. He points out plants and chats about the practical work he was doing the previous week.

Furthermore, he shows his grandfather and his uncle the work he has completed since enrolling in his course in September 2021.

He spends time poring over some old photographs with his grandfather. They look at how innovation and technology at Greenmount have progressed from the 1960s to 2021.

This leads Matthew into a conversation about his aspirations for the future.

He has already set up his own online business offering gardening and landscaping services. Who knows what path he will choose in June 2022 when he graduates from CAFRE.

Strong family ties are common in the Northern Ireland agri-food businesses, and this is no different for the Wright family.

However, each generation has chosen a different career path in the industry. Still, whether it is agriculture, food or horticulture, CAFRE has been able to help them grow and develop in their area of interest and expertise.

It was a pleasure to meet Jim, Mark and Matthew on the beautiful grounds of CAFRE’s Greenmount Campus. I hope to see them again soon.

CAFRE has a wealth of courses to suit everyone at all stages in their lives. Learning never stops, and they are welcome back anytime.