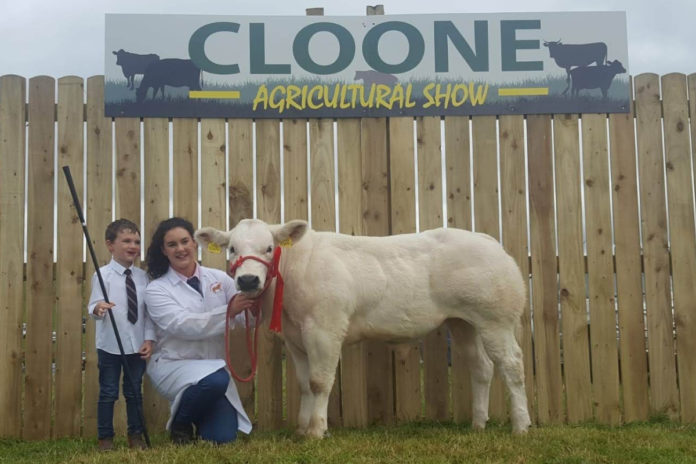 ‘I have a bug for farming’

Saoirse Fox may only be 19-years-old, but she is a powerful force to be reckoned with in the agricultural circles, writes Catherina Cunnane, editor of That’s Farming.

The Cloone, Co. Leitrim native breeds prize-winning cattle and is a second-year agriculture and environmental management student at G.M.I.T/ Mountbellew.

“I have an interest in every sort of an animal. When I was a child, I mainly had horses and dogs were always around our house as well.”

“Growing up, we never had cows – I was almost afraid to walk into a field with them. My interest in farming began when I was ten-years-old. I have a bug for farming.” she laughed.

Saoirse and her step-father strive to breed high-end pedigree Limousin and commercial cattle.

The old Irish proverb, which states ‘an ounce of breeding is worth a tonne of feeding’, is an adage that can definitely be applied to this suckler herd, which uses 100% AI.

“Even though suckler farming isn’t the most profitable enterprise, seeing your cows breed good calves is joyous,” Saoirse explained.

Their farm is home to numerous pedigree cows including, Faughill Champagne, who bred the senior champion at the 2014 Irish Limousin premier sale; she is also the dam of twin Sympa sons which sold for a combined price of €9,800 in 2018.

Breeding quality cattle is the main aim of this game for the Leitrim-duo, who view docility as a trait that is just as desirable.

“Docility is important for us, working with the animals and the people who purchase our bulls and in-calf heifers.”

“I love to spend time with certain pets I have, combing and haltering them; this makes preparation for agricultural shows easier.”

She admitted that it can be difficult to balance her third-level studies with other commitments including farming, her part-time position and her involvement with the North-Eastern Irish Limousin Club, YMA and Carrigallen Macra.

“My studies and part-time job don’t leave much time for farming which is disappointing. At the moment, I’m having a ball working away on my placement.”

“I come home in the evenings to do the foddering – It’s a great help for my stepdad and it’s great to be able to do something you love during lockdown.”

“My course highlight to date has to be my placement. It is highlighting that there are so many other jobs in the line of agriculture that you wouldn’t think are even there.”

Saoirse was awarded the Gaffney and Mulleady scholarship from Aurivo and is completing work placement at the global agri-business since January.

She began working in its chemical lab at its dairy ingredients site in Ballaghderreen, before moving to its feed mill and eventually to Homeland in Mohill, where she is now based.

“My course provides a perfect balance between theoretical and practical learning – We received an insight into the practical side of farming in Mountbellew, while in G.M.I.T, we see the scientific means behind our on-farm actions.”

In these modern times, Saoirse feels like women are treated the same as their male counterparts in the agricultural sector.

She said that in some instances, younger women in the sector can be dismissed by others, but she has found that one can overcome this by being confident in your own abilities and standing your ground.

“Times have changed in so many ways. It’s visible to see this when you go to a mart or an agricultural show that there are women present in large numbers and working together equally.”

“Even in the likes of an ag college, the number of girls attending is rising. I don’t feel at a different level to any other male counterpart.

She explained that while she was making her CAO choices, she encouraged by her family to enrol in an agricultural-related course “I was drawn to putting down teaching or nursing, but thinking back now, I wouldn’t choose anything else.”

“Life is so much easier when you do something you have an interest in, but nothing should be forced upon someone.”

Saoirse’s main focus is to complete her undergraduate studies with a view to carving out a career in the agricultural sector. “I have so many ideas of what I’d like to do, nutrition and animal science are interesting.”

“I have also thought about travelling more around the world, so I will definitely do it at some stage. Australia is of interest at the moment.”

“Nothing is ever impossible and if there are difficulties, there is always another way around a long and winding path,” Saoirse concluded.

- Advertisement -
Previous articleFarmers up in arms over encouragement of cheap NZ beef imports
Next articleWeather: Mixed bag of showers, sunshine and dry conditions