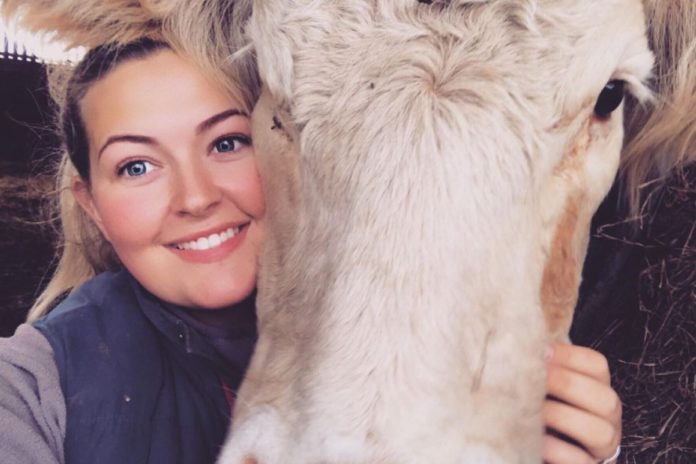 24-year-old blogger, beef farmer and relief milker, Olivia Holt, was not initially encouraged to farm when she was younger, writes Catherina Cunnane.

“At first, I was told to get a good education and a well-paid job by my parents. So, I went to college and eventually to university to study law,” she explained.

The 24-year-old attained her degree and secured a position in a firm as a paralegal. “I soon realised being in an office was not for me.”

She then began working on a farm as a relief milker – a job which she viewed as “the perfect fit” as she grew up on a dairy farm, steeped in family tradition.

“Three years down the line, I am still there milking and I thoroughly enjoy it – I think it’s refreshing for farms to have women working on them.”

“Farming is slowly diversifying which I think is fantastic. Many tasks that only men used to do are now being done by us women.” Olivia also works on the home farm, which is based in Lancashire, with her father, Peter. The family switched from dairy to beef in recent years – a move which came with the establishment of a pedigree Limousin herd.

“My dad went to the auction one day and brought back ten pedigree Limousins – I instantly took a liking to them.”

“He eventually bought a Limousin bull, called Marshall, who sealed the deal for me. After meeting him, I was totally in love with the Limousin breed.”

The Holts now have a small herd of pedigree Limousins and in the region of 200 commercial-crossbred cows. “These past few years, I have been watching Limousins being shown all over the country.”

“I have two horses which I show myself – showing my own cattle is something I have always wanted to do.”

The 24-year-old agricultural enthusiast intends to exhibit two of her own heifers, Fairfax and Favour, at agricultural shows this summer. “This is something I am really looking forward to doing,” she admitted. In August, Olivia applied to join the police and got through to the final stage, but whilst she was in the process of completing her final assessments, she had a change of heart.

“I began to notice all the negative coverage on TV and social media that farmers were getting. This was when I had to reconsider joining the police, in the police you have to remain impartial – especially on social media.”

“This is something I knew I would not be able to do as I realised social media was the only platform I had that I could use to defend farming.”

“I decided to withdraw from the police, as I knew deep down farming, is what I am meant to be doing.

This led to the creation of her own blog, Livs Limousins, so people can follow the Holt’s farm and learn the truth about the farming lifestyle. “The Facebook page has done amazing and utterly exceeded my expectations, gaining over 3,300 followers in just three months.”

“This tells me people are wanting to learn about where their food comes from, which I think is brilliant and incredibly important for the farming industry,” Olivia added. Olivia’s plans for the future include making her debut on the bovine show circuit and expanding the family’s pedigree Limousin herd. “I am often asked if we sell our own beef so a farm shop may also eventually be on the cards,” she concluded. - Advertisement -
Previous article
‘I will be driving the same Massey 35x as I drove last year’
Next article
VIDEO: ‘The weather could affect you more so than the price’