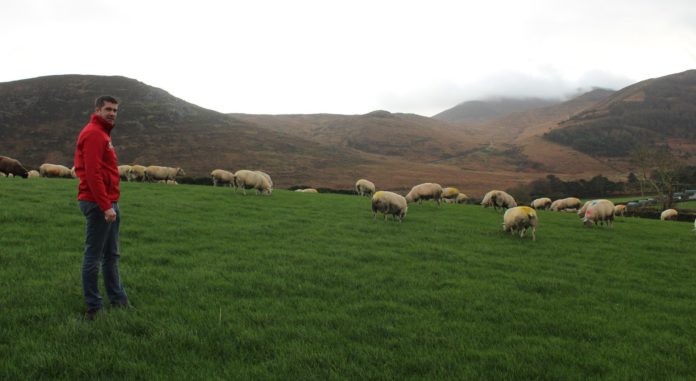 One County Down farmer is hoping to overcome the challenge of finding enough space at lambing by shearing his ewes at housing in the winter.

Jayme Carvill farms in partnership with his brother and father outside Hilltown, Co Down.

The farm carries 450 lambing ewes, 300 ewe lambs and 120 bullocks. The enterprise spans 220-acres, of which over 50% is severely disadvantaged area (SDA).

For the last six years, Jayme has been a member of his local sheep Business Development Group (BDG), which specialist technical facilitator, Adam Jones, leads.

He has also been an AFBI GrassCheck farmer for the past five years.

Through membership of his local BDG, he has improved grassland management and flock health.

He now completes regular soil analysis, measures grass weekly and breeds all his own replacements.

These efficiency improvements have allowed him to increase the number of Texel Blue-Leicester cross ewes from 250 six years ago to the current 450 today.

Also, he has problems with ewes becoming stuck on their backs whenever they are heavy in-lamb and full fleeced.

Jayme added, “We have increased ewe numbers gradually over the last few years,”

“Genetics have improved, and so has my grass management. We are at a stage now where we could push ewe numbers on, but housing is becoming the limiting factor.”

After considering some options, he has decided to look at the possibility of shearing his ewes at housing in late December when he completes scanning.

He normally houses ewes for ten weeks before lambing starts in early March.

It is recommended that unshorn ewes housed on straw bedding or slats have a minimum space allowance of 1.2m2 at 70kg and 1.4 m2 at 90Kg.

For shorn ewes, this can be reduced by a maximum of 10% allowing more ewes to be housed per pen.

This is due to ewes having higher feed intakes and lambs being born later as they are not as susceptible to heat stress.

Mortality is also reduced as ewes that are shorn are more likely to seek out shelter and take their lambs with them.

There are some important management issues that farmers must consider.

Only ewes with a body condition score of 2.5 and above should have their fleeces removed.

It is also important to ensure ewes are only sheared at housing. Also, you should house them for a minimum of eight weeks to allow for optimal wool re-growth.

Furthermore, even though re-growth will occur, it is still important to consider shelter at turn-out. This could include natural barriers such as slopes and hedgerows to protect ewes and lambs from the worst weather events.

Winter shearing provides a means of increasing the stocking density in available housing without any significant investment or system change.

The Department of Agriculture, Environment and Rural Affairs (DAERA) and the European Agriculture Fund for Rural Development, fund the BDG scheme.