Cost of keeping winter milk cow rises to just under €2,700

That is according to James Dunne, Teagasc dairy specialist, and winter milk lead specialist, who, during a recent Teagasc webinar, outlined that over the previous four years, “costs have increased by €350, so there have been significant costs over the last five seasons”.

He acknowledged that production costs are somewhat masked by a “relatively good” manufacturing milk price, but “it is important that people understand where costs have gone to on farms”.

“It is looking like a good year, but the concern is that costs remain high, and in cases where milk prices start to fall back, that is where margins become squeezed.”

The state agency reviewed increased costs on winter milk farms by utilising 2021 as a baseline production year with data from its eProfit monitor.

It looked at winter calving herds producing 521kgs of MS/cow, 6,510 litres at 4.20% fat and 3.52% protein. It took account of fixed and variable cost hikes, and quantities remained constant.

Dunne outlined that “it is important to remember that these [figures] are average and typical for the average, but ultimately, individual farms will possibly be above or below in terms of these costs”.

He also confirmed that costs include heifer rearing, as “no system runs without some form of a replacement enterprise”. 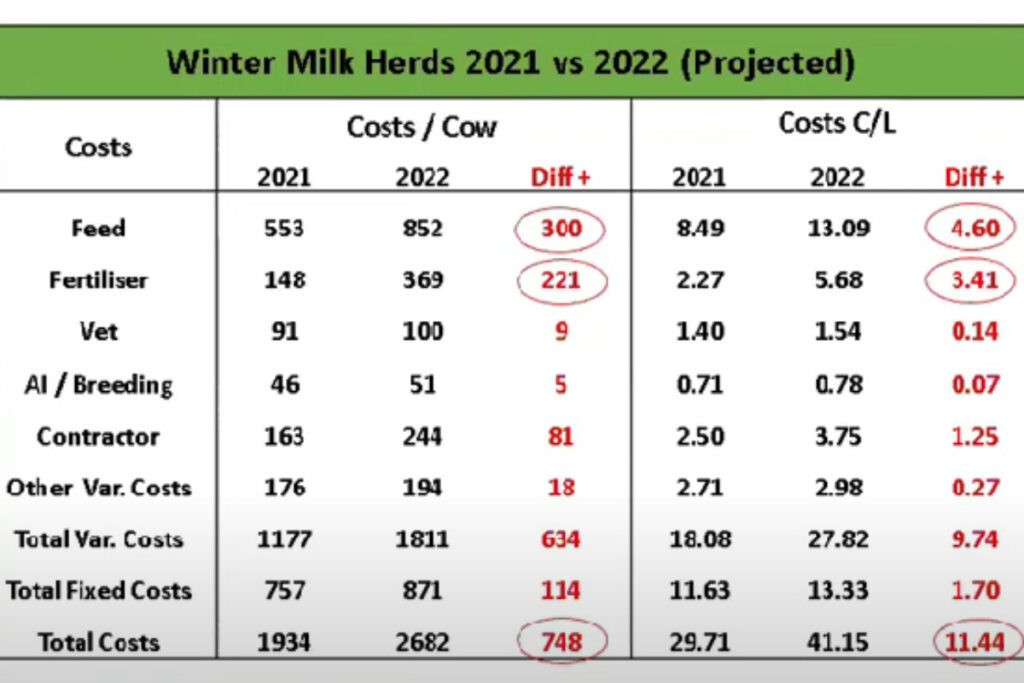 Dunne added that “farmers should be aware that these are not breakeven costs, but they have been brought to a certain point”.

He outlined that breakeven costs will be higher when capital repayments, drawings and taxation are included.

“Really, what individual farmers need to look at is adding in the costs of capital repayments, drawings, taxation, ect. It is not uncommon when we do that, that we are looking at something over 41c/L there for a 6,500L herd.”

“It is not uncommon that we add 12-13c/L over and above that, depending on the scale and level of borrowing on drawings required, so you could be at 53-54c/L in terms of breakeven costs.”

During the virtual session, he stressed that farmers should know the cost of production and recommended completing an e-Profit Monitor for their dairy business.

He suggested that “maybe the best year to do benchmark analysis is a good year”.

“In that way, we can plan out over the next couple of years in terms of what can be done if there are additional funds there,” he concluded.