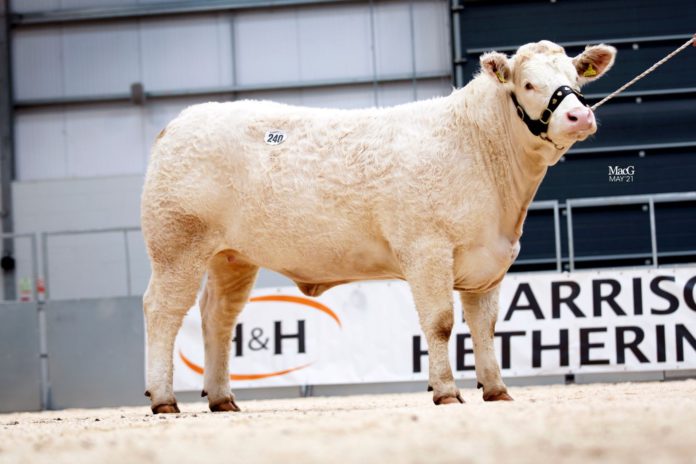 For the first time in years, Harrison and Hetherington will host a dedicated collective sale of Charolais females on behalf of the British Charolais Cattle Society later this month.

According to organisers, the sale has attracted entries from “some of the most prominent” breeders in the country.

31 heifers – either served or maiden – from some of the best Charolais genetics in the UK are catalogued for sale.

Stock from the following herds will be for sale at the White Gold Charolais sale:

In the past, the Charolais Cattle Society has held a christmas cracker sale of females at year-end.

On reviewing the demand, this new standalone female sale has been organised, with the backing and support of several Charolais breeders north and south of the border.

“We are delighted to be working with The British Charolais Cattle Society in rekindling what was always a successful winter sale of Charolais females.”

“This sale aims to provide both a showcase and a live ring sale. We know there is demand from those looking to improve their existing herds and those wanting to start up their own herd.”

“In recent years, these noted herds have been primarily sold females directly off-farm. Therefore, this is an opportunity to purchase females of this calibre, on the open market and under one roof, has been almost non-existent.”

“Our intention is for this sale to become a key and regular date in both the Charolais breeders’ calendar and our own calendar here at Harrison & Hetherington.”

“There is a clear demand for top quality females. We have secured a fantastic lineup of some of the best current Charolais genetics in the UK.”

“In holding this sale, we are offering a platform for vendors to show off their breeding and providing an opportunity for existing and new breeders to have a choice of best-quality stock to purchase on the open market.”

“This is a fantastic way to begin the year. Without a doubt, this will be a great sale. I’m looking forward to it enormously.” Allen concluded.

The society believes the breed “offers a bright future for British beef” due to its sustainability and profitability.

“With continued improvement to calving ease, unrivalled growth rates and outstanding carcass quality, the Charolais is renowned for crossing into profit,” the society said in a statement.