That's FarmingThat\'s Farming Irelands Largest Farming News, Properties and Classifieds Network
HomeDairy‘It is about profitability to make enough out of 120 cows for... 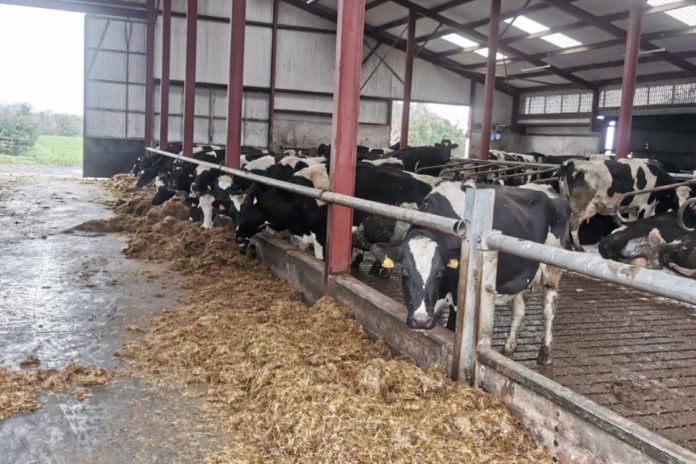 In this week’s dairy segment, That’s Farming, speaks to Hugh Gaffney, who farms in partnership with his father, Mattie in Co Westmeath. He discusses expanding their herd by 50 cows, the benefits of cross-breeding, calving heifers at 24-months and sexed semen.

Hugh Gaffney studied a Bachelor of Mechanical Engineering degree at AIT but expanded cow numbers to become a full-time farmer.

He and his father, Mattie, farm a 120-cow herd in partnership in County Westmeath near the village of Killucan.

Their herd comprises 70% British Friesian and 30% Holstein Friesian cows across 230-acres of land.

“I was more an outdoor than an indoor person. I am hands-on and love working with animals, so it made sense in my head,” Hugh Gaffney, a Teagasc Mullingar Green Certificate graduate, told That’s Farming.

“We cross one breed with the other. We get body size and structure with British Friesians and more milk out of Holstein Friesians.”

“Cows have been getting a lot smaller over the last few years with that high EBI animal and breeding coming in.”

“We keep a low-maintenance cow but still have a decent enough calf on the ground and a good enough cull cow to sell.”

Upon returning home from college, Hugh gradually expanded their herd from an initial 80 cows to current figures.

“It was a wage for two people more so than one. The 120-cow mark realistically was more than manageable with one person. It was a case of trying to get them set up that way more than anything.”

“Also, we keep beef progeny as well as we have out-farm ground too. It suits our system, and animals can graze the land during the summer.”

They use one of their three stock bulls – two Herefords and Angus – to mop up.

“We have been using sexed semen on heifers for up to six years. We went down that route to have all Friesian heifers coming as early as we can.”

“We have fewer Friesian bulls on the ground. It is a lot easier to sell a beef-sired calf than a Friesian bull calf.”

“We mainly chose sexed semen to have heifers coming the first three to four weeks. They are after getting away from the age and are going to calf from two years afterwards.”

“We feel it works very well on heifers, and fertility is good. It would not be as good with cows,” the Westmeath dairy farmer added.

The father and son team calves their herd from the end of January to the end of April due to favourable weather conditions, calving 80% by mid-March.

The herd’s average calving interval is 370 days, with a 70% 6-week calving rate.

They sell all Hereford heifers by mid-January at 22-months-old and sell bullocks as forward stores from the farm.

“Bullocks take more finishing, so realistically, it would be April or May before they are all fully finished.”

“Friesian bulls are sold at 4-6 weeks old. I have a couple of repeat customers who buy them off me every year.”

“We only had four or five last year, so there does not be too many of them to get rid of.”

They retain up to 30 Friesian heifers as replacements to calve down at 24-months.

“They get priority as regards to rearing to ensure they do not miss any of their targets. That enables them to be strong enough to calf at two-years-old.”

“If there are a few lighter heifers in the bunch for breeding, we leave them on for a month or six weeks to allow them to grow that little more.”

“We focus on weight and size than the actual age when it comes to breeding. It suits the farm, and we do not calf in autumn. In our view, they would be far too strong to breed a full year later.” 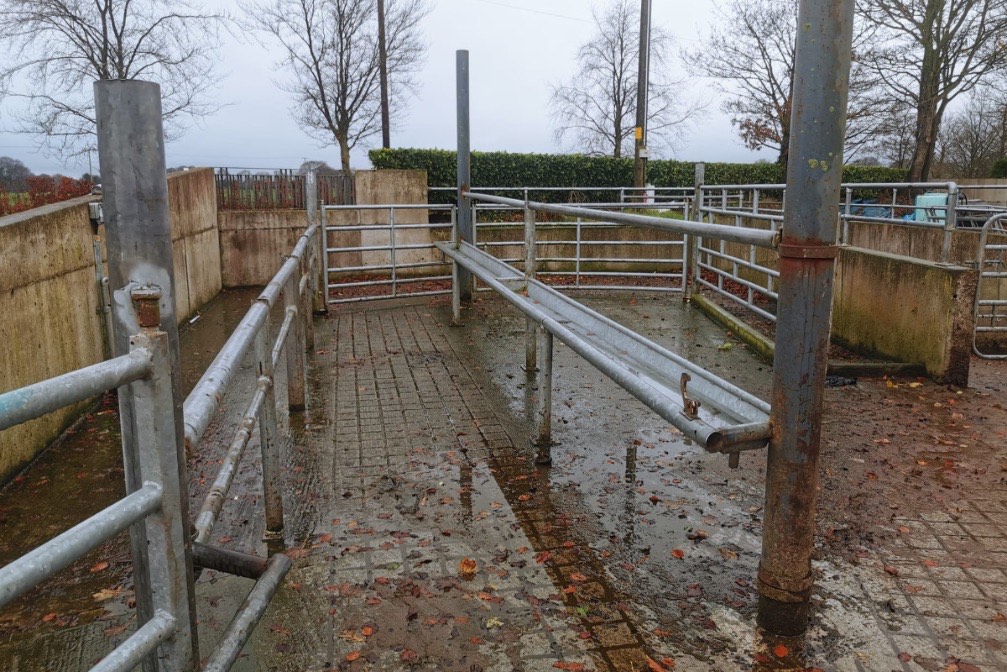 “It was speed more than anything else, and we were upping numbers. The parlour was about 25-years-old, so the stalls were getting rusted.”

According to Hugh, milking takes 90 minutes, on average, each morning and evening.

“I would like to double up the parlour. The way the holding yard and sheds are set up; ideally, it would be an option without changing a lot.”

“I am happy enough at the minute, but maybe in a couple of years, I might consider it.”

Other farm infrastructures include a 140-cow cubicle shed, split into four housing units, a slatted shed and calf pens. 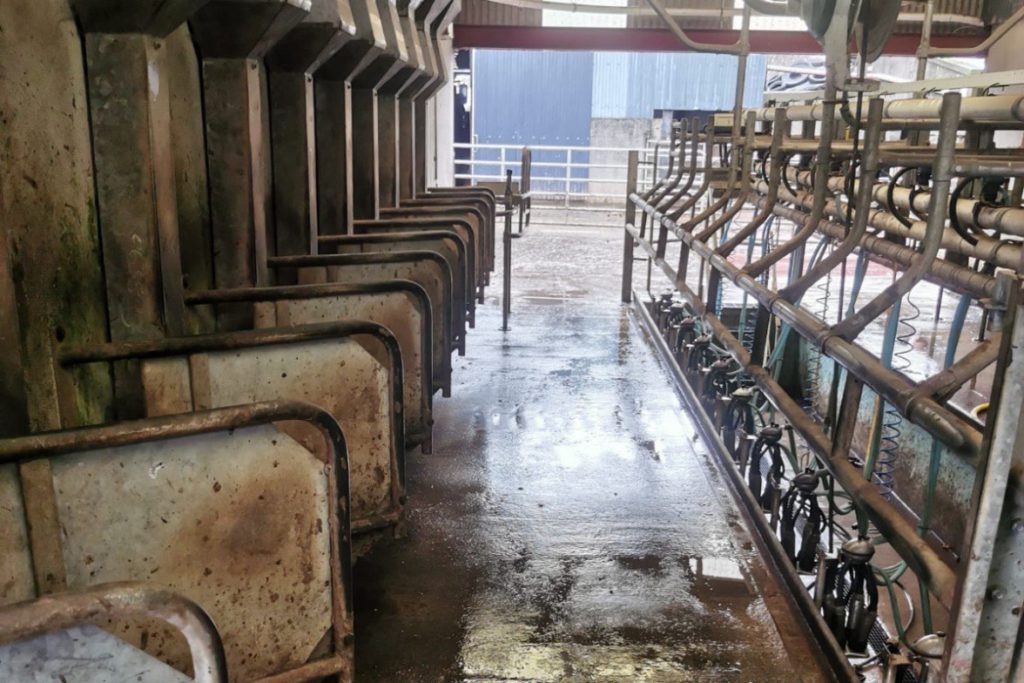 Hugh feels stocking rates, weather, nitrates, and fertiliser prices are his most significant challenges in the sector.

“Them challenges are not too bad, but soil water and all the rest are going to be very hard. There will have to be modifications to meet upcoming regulations.”

“All in all, the weather would be the biggest challenge. In terms of workloads in the spring, if weather comes against you, it nearly doubles it automatically.”

“For stocking rates, it is about having the right amount of land. It is about profitability more than anything to make sure you can make enough out of 120 cows for one person. Try to keep things as simple and costless as you can.”

He is “very happy” with current figures of 6,000L and intends to improve milk solids and cow maintenance.

“You need grazing ground and have to increase stock. It is all about farmers knowing what land can carry and what grass you can grow more than anything.”

“There is no point expanding unless you have the land and set up to suit it.”

Commenting on the future of dairy farming, he said:

“There probably will be restrictions coming down the line. It will not be a quota per se, but it will be a quota on what your stocking rates allow, e.g., slurry storage.”

“Hopefully, milk co-ops can take in all the litres,” the Teagasc Discussion Group and IFA member concluded.