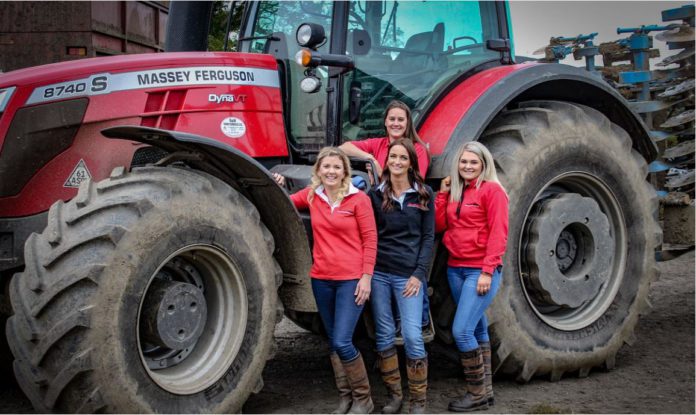 ‘We are the wives of four of the Killen Brothers’

“The farm is always busy – there is always so much going on and it is very much a case of we all just get stuck in and help out. If you are afraid of hard work, this isn’t the place for you at all.”

Those are the words of Joanne, Karen, Mandy, and Lorraine Killen, who are the wives of four of the Killen Brothers, agricultural contractors and farmers by nature.

Residing outside Derry/Londonderry in Northern Ireland, they grew up in the countryside with three being farmers and agricultural contractors’ daughters.

“We are the wives of four of the Killen Brothers. We all have a keen interest in animals and farming, with most of us owning a horse at one time or another.” Lorraine explained to Catherina Cunnane, editor of That’s Farming.

Joanne and Karen grew up on a dairy and sheep farm, while Lorraine was raised on a beef and sheep enterprise. Mandy’s dad is an engineer which, according to Lorraine, “comes in handy”.

The Killen Brothers milk approximately 440 cows with 150 replacements, farm over 1,100-acres in total and run an anaerobic digestor covering a further 900-acres, whilst providing a full agricultural service to farmers.

Six brothers and their father work on the dairy, beef and arable farm, with a further six full-time employees.

They calve all cows between September and March keeping most heifer calves for replacements.

The contracting business is busy all-year-round with slurry and silage featuring heavily. “We cut over 12,000-acres of grass each year, combine over 1,000-acre of crops, cut 2000 acres of maize and wholecrop, 1000-acres of tillage and spread in the region of 35 million gallons of slurry.”

“We all very much enjoy farming – especially now that we all have children. The farm and contracting business have grown massively in the past few years and more often than not, we have had to pull on the wellies and jump into a tractor, feed the calves or finish the milking.” Lorraine explained.

Any of the girls can be found anywhere from the milking parlour, to the calf shed or doing part or diesel runs.

“The weather plays such a big part in the contracting business and sometimes it is just all hands-on deck to get the work done.”

Lorraine revealed that you would never know who you would find driving about in the JCB throughout the day, loading and unloading lorries and backing in trailers.

“A big part of what we do is our dinner night. We all have a night each, each week to feed all the workers. It’s usually between 12 and 30 dinners we make and then take to wherever the boys are working which can sometimes be at opposite ends of the country.”

“We are very lucky that there are the four of us to help each other out, with dishing it out, running with the delivery or helping look after each other’s kids.”

“Some may argue that is actually worse than a day’s manual work, but we are all in agreement that a working man needs to be fed.”

Aside from the manual work and making dinners, they are responsible for some of the admin, social media, vehicle administration, invoicing, management of the ad plant, banking runs, HR and “anything else that is thrown at us”.

They are not just farmer’s wives; they are all successful women with promising careers in their own right.

Joanne is practice manager of a local vet’s surgery, Mandy is a nurse, Lorraine is an insurance agent and has just established a social media management and content creation business and Karen has a background in promotional merchandise and has just launched an online e-commerce website where the famous Killen Bros clothing can be purchased.

“A lot of people who would arrive at the yard are often surprised when they find one of us in the milking parlour or in the calf shed.”

“We grew up in the generation where being a girl involved in farming perhaps, wasn’t seen as being very cool but thankfully that has all changed now.”

“It certainly isn’t easy for a woman in the agriculture industry. You find many people assume we are kept women, married to farmers, yet they don’t see that often we do a day’s work at our own job before we come home to do another!”

“I think it all comes down to the fact that we have a love for farming and it’s a way of life for us,” Lorraine added.

“We have found that women in agriculture has grown so much since we were in school. When Joanne went to Greenmount there were only two girls in her final year class and now it is nearly 50:50 which is great to see.”

They find that one of the main challenges for a contractor’s wife is trying to balance their careers, with raising kids and helping their husbands as much as they can.

“A contractor’s wife can often be lonely as they are out from early morning to late at night, so most of the childcare and home decisions are up to us.”

“We are so fortunate as there are 4 of us and we can share the load and keep each other company, share babysitting duties and support each other when the going gets tough.”

“Some evenings there are more kids in the calf house than calves, as one of us would be milking and someone else running with food deliveries.”

With seven Killen juniors in total, four of which are girls, Lorraine said it is encouraging to see that there are so many opportunities within agriculture, not just farming.

“With the agriculture food industry bring one of the most important industries in Northern Ireland and one of the largest recruiters for new graduates, we hope that there are much more lucrative career opportunities for girls moving forward if they wish to do so.”

“We are all so proud of how far the boys have come over the past few years and we will be there to support them as much as we can.”

“In the future no doubt the Killen bros family will continue to expand and even though some days seem to never end we wouldn’t have it any other way.”