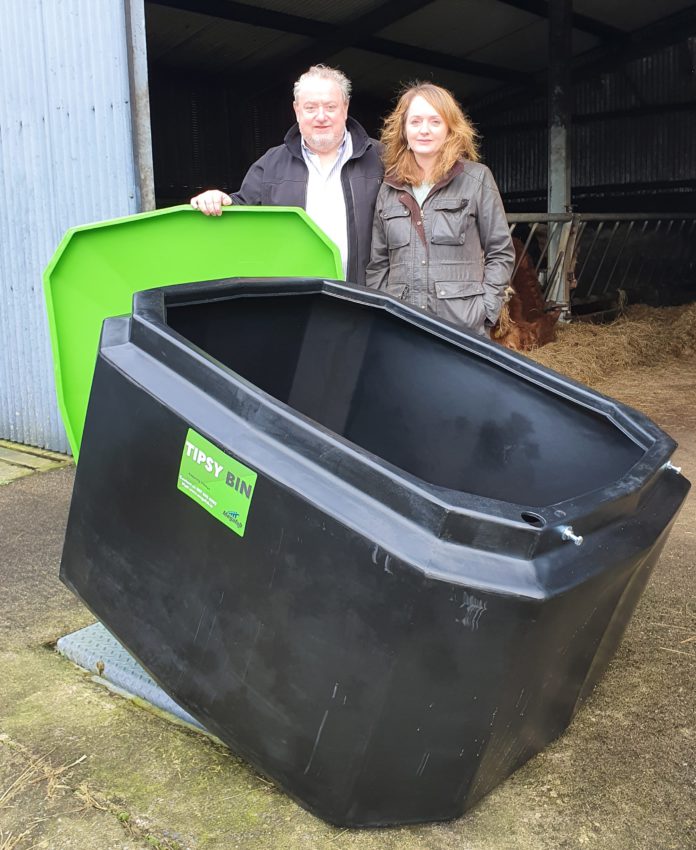 Michael Egan from Glenamaddy, Co. Galway is the founder of the family-owned company Megafab. He has been working on the Tipsy-Bin for the past number of years.

The product was originally planned for launch in March 2020, but due to the pandemic, it was launched in October.

It has featured in the National Ploughing Championships Innovation Arena.

The Tipsy Bin is a very easy process with a cleverly positioned drain hole. The volume of the bin is one cubic meter and it can hold 700 kg of nuts.

The bin can be transported easily and fits into a standard 8×4 foot builders trailer and is lightweight and extremely robust.

It is manufactured from high-grade medium density polythene with ultraviolet stabilisation for protection against sunlight.

The bin is easily moveable on a tractor bale lifter, front loader, the grooves on the bottom of the bin are very deep and not curved which makes it easier to load.

The idea was inspired when he was on his brother’s farm. “I had seen him trying to get the last bucket of meal out of the bin, I got the idea there of trying to make it easier for farmers to access it.”

Michael was speaking to several farmers, “I discovered that feeding livestock was the most integral aspect of the farming day.”

“I was playing around with the idea for a while. We came up with the concept of it being able to tip. It was my wife Brenda that christened it the Tipsy Bin.”

“Someone said the name tip easy and my wife shortened it to tipsy.”

Michael has been involved in the manufacturing of meal bins since they were first introduced to the Irish market.

“The first meal bin was made during the foot and mouth crisis in 2007.” He told That’s Farming.

With over 30 years in experience, he was keen to bring premium materials and use the rotational molding processes to build the most robust meal bin on the market.

The tipsy bin is an innovative design which eliminates waste and contaminated feed by allowing the user to easily tip the bin over by lowering the entry point.

The bin reduces the risk of contamination of fresh feed. It is easier to empty and clean with a hole in the bin for the washings to go out.

The bin offers customers a new feature. It is now possible for a farmer to reach to the bottom of the bin so that all the feed can be completely used.

The handle for the lid once secured in position cannot lift even if you have windy or rainy conditions. Farmers do not have to put clips in to secure the bin.

It was firstly designed to eliminate the need for over-stretching in reaching for the feed at the bottom in the meal bin.

There is a flat surface inside the bin which allows for a bucket or a scoop to gain access without stretching of ribs in the process.

The feedback was very positive from farmers who tested it. “I’ve had a number of farmers road test the Tipsy Bin. The feedback has been overwhelmingly positive.”

“People are keen to manage workload, increase productivity, drive efficiency on the farm, take waste out of their business.”

Furthermore, Michael is very thankful to his family for helping him set up Megafab LTD and market the Tipsy bin.

“My son Nathan has helped me look after social media and doing the videos. Social media has played a big part in the marketing of the product. Without social media, I would not have been able to get it off the ground.”

Michael plans to market his product this season in the Irish market including Northern Ireland, “We are looking at setting up a distribution network in the UK.”

In Ireland, he is currently selling directly to the farmer, but in the UK, he will have to go through a distributor.

For more information on the Tipsy Bin, visit megafab.ie or contact Michael on 087 6624582.