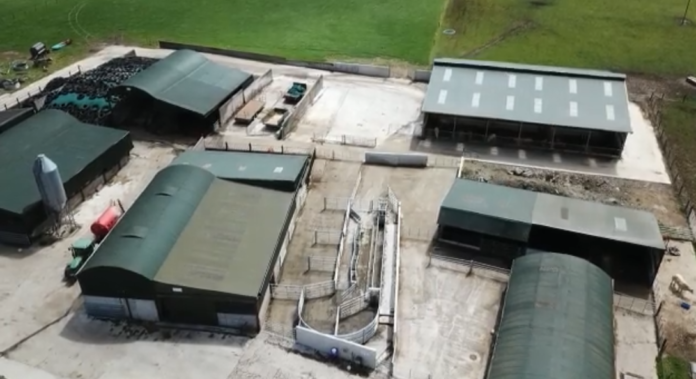 In June 2018, the Irish Grassland Association visited the O’ Connor farm near the village of Moone in south Kildare.

The mixed enterprise, which comprises beef, sheep, tillage and pigs, is run as a partnership by Monica, Tom and their son, Thomas.

In 2015, Thomas was the winner of the FBD Young Beef Farmer of the Year Award.

The beef enterprise then was consisted of 90 suckler cows with all male progeny finished as bulls under16 months and heifers at 21 months, with 200 additional cattle purchased for finishing, including both young bulls and heifers.

The unique feature of this farm is the way the O’ Connors paddock graze the cattle in large groups during the grazing season.

Grassland management was excellent with all the farm laid out in 2 ha paddocks, with the provision for subdivision of all paddocks.

During the visit in 2018, visitors saw the three pillars that supported high output on the farm – breeding, grassland management, livestock management.

The O’ Connors were achieving an annual stocking rate of 3.3 livestock units per ha and a beef output of 1,498 live weight per hectare, grass utilised in 2017 was 11.5 tonnes of dry matter per hectare.

The sheep enterprise has expanded to a flock of 250 breeding ewes, with plans to increase the flock to 300 ewes.

No changes have been made to the tillage area; the pig enterprise also remains unchanged.

The cattle enterprise has seen changes with 20 fewer suckler cows in the herd partly due to a bull fertility problem necessitating increased culling within the herd.

Fewer store cattle have been purchased due to the herd being TB restricted and also in a planned approach to meet the organic nitrogen reductions necessary to comply with the BEAM scheme.

The O’ Connors have invested in their beef enterprise with the building of a 6-bay slatted suckler house with a lie back, calving pens and two feed passages.

In order to reduce labour input and in the interests of safe handling of livestock, a new state-of-the-art cattle handling unit was built incorporating a circular forcing pen, drafting/handling pens and weighing facility with bluetooth-compatible clock to enable reading of EID tags.

Due to the drought that prevailed in May/June, bulls were put onto finishing rations earlier in order to maintain rotation length and average farm cover.

In order to achieve better utilisation of nutrients in slurry a dribble-bar was fitted onto the existing slurry tank.

This also enables the O’ Connors to spread slurry onto the grazing paddocks and reduce chemical nitrogen usage, while at the same time reducing ammonia emissions.

Chemical fertilizer use has changed with protected urea the product of choice to further reduce ammonia emissions while reducing fertilizer costs.

As if Thomas was not already busy on an intensive livestock/tillage farm and involvement with Macra, he has taken on the role of IFA county chairman for Kildare/West Wicklow.

Once the farm becomes clear of TB and the BEAM reduction period has passed, the suckler cow numbers will go back up to 90 cows along with a resumption of normal cattle finishing numbers.

All cattle will be EID-tagged to facilitate efficient and safe capture of cattle performance and allow rapid interpretation of weighing results.