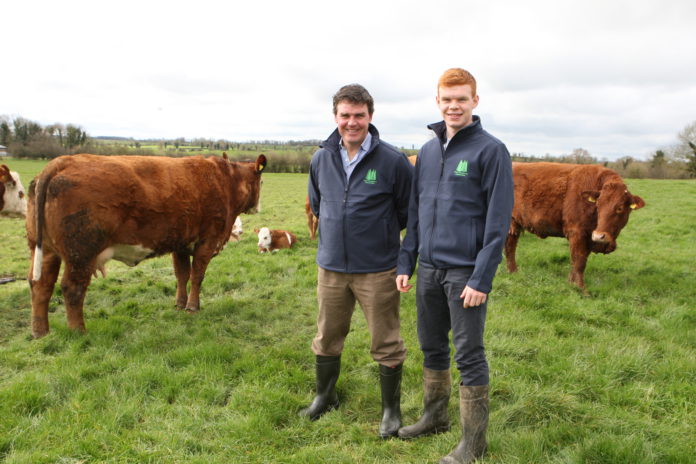 The Irish Grassland Association is revisiting Halpin family farm in Co. Meath this summer, as part of its virtual farm walk series.

Run by Tom, in partnership with his son Matthew, the farm comprises 160ac of free-draining grassland situated in one block.

The farm is devoted to a suckler cow-to-beef enterprise with the fundamental objective being to maximize animal performance through good grassland management and high-quality, continental genetics.

In July 2017, the family farm hosted an afternoon farm walk as part of the Irish Grassland Association’s beef open day.

The walk immediately followed a morning beef conference which took place in the Headfort Arms Hotel in the nearby town of Kells. While there have been some substantial changes on the farm since then, many key aspects of the operation have stayed exactly the same.

For instance, in the last three years, the farm’s core system has remained untouched.

The breeding strategy on the farm is also unchanged in the last three years, with Charolais, Limousin and Simmental genetics in equal use to maximise hybrid-vigour which serves to benefit both the future ‘cow-makers’ being born on the farm, and indeed the beef bulls destined for slaughter.

Cow numbers are relatively unchanged with 97 calving in 2020.

In 2017, attendees to the farm walk would have learned about the farm’s split-calving system, whereby 60% of the herd calved in February and March and the remaining 40% were calved in June and July.

However, in the last three years, and after careful consideration, the herd has been in transition to 100% spring calving. Indeed, spring 2020 was the first year in which the full herd calved down between February and April.

While the somewhat unique summer-calving system had its benefits and attracted plenty of interest from visiting farmers over the years, ultimately the decision to move to all spring-calving was made based on the ability to better manage the herd overall, to reduce the number of grazing groups on the farm for improved grassland management and to streamline labour at various stages of the year.

It was also felt that the productivity of the summer-calving herd in relation to their incurred feed costs was significantly lower than their spring-calving counterparts, given the fact they were rearing a calf mainly indoors.

Grazing and grassland management on the farm have also continued to evolve.

During its four-year participation (2012-2016) in phase two of the Teagasc BETTER Farm Beef Programme, the farm dropped rented ground and opted instead to maximise grass production and utilisation and subsequent animal performance on the home block.

Attendees at the 2017 walk will have seen that infrastructure on the farm was impressive, with a total of 40 divisions already in place, with a combination of paddocks and some larger blocks for silage cutting.

This has since increased to 50 divisions, with most offering the potential to be sub-divided.

Soil fertility has also been under continuous improvement, with Spring 2020 soil tests indicating a 100% sufficiency in K and an 80% lime sufficiency. P levels need some more attention with some index 2s needing a push towards index 3.

At the 2017 event, it was acknowledged that reseeding was the final piece of the grassland puzzle that would be required to fully capture the potential of the land on the farm.

Those wheels have since been set in motion. In August 2019, a 15ac block was reseeded in a traditional plough, till and sow fashion.

With more than pleasing results obtained, the plan is to reseed another 13ac block in Autumn 2020, while the longer-term objective will be to reseed the entire farm in blocks of 10-15ac each year in the autumn.

To date, 2020 has been a pleasing year, farming-wise. The first, full spring-calving season went well with 104 live calves on the ground from 97 calvings. An unprecedented 11 sets of twins more than offset four mortalities.

The breeding season has also drawn to a close. After being forced to cull the Simmental stock bull in 2019, that disappointment actually presented an opportunity to use AI in the herd.

A batch of 34 cows were synchronized in a fixed-time AI programme. Initial results were positive, with scanning showing 23 in-calf to the first service and 7 held to their first repeat. A final scan is yet to be completed on the four remaining cows.

The Charolais and Limousin stock bulls were taken from their respective bunches of cows and maiden heifers on July 20th.

First cut silage was made on June 2nd with a somewhat disappointing yield due to prolonged drought conditions. The second-cut crop looks more promising.

Seventy-five bales of surplus grass have been made to date, with another 5-acres earmarked for cutting.

Under 16 months are killing well, coming to an average carcase weight of 395kg at 15 months of age.