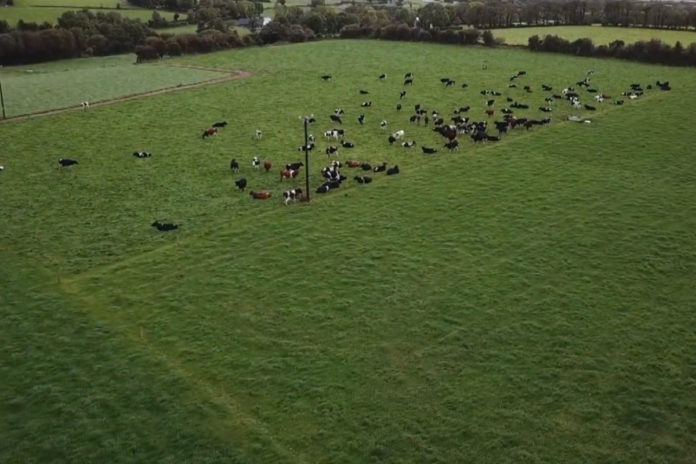 Jack Kearney, from Rathcormac, Co. Cork, is a Teagasc/Glanbia Future Farm participant. He farms 140 cows on 78 hectares in partnership with his parents.

Richard O’Brien, coordinator of the Teagasc Glanbia joint programme, caught up with Jack in a recent video to discuss grassland management and breeding.

“All the cows are nearly calved here so we have to start walking twice-a-week so the average farm covers don’t sink too far below 600. We will just have to keep an eye on it now and we will have to raise meal to 6kg.”

“They’ll need 6kg because the farm cover will probably drop below 600 within a couple of days so we will just have to slow it until it gets to the next rotation.”

“What fertiliser do you have out?” – “There is 70 units out on all farms except what is grazed, so what we are doing is after the stuff that is grazed we will have to spread slurry and that will get all the ground up to 70 units and the rest will be spread with protected urea.”

“How many units will you use in April?” – “Probably follow the cows with just a unit a day I suppose, so 23 units again in April and that’s what we’ll be doing with the protected urea.”

“What is your plan to prepare for the breeding season?” – “We’ll be starting to pre-breeding next week so we will be tail painting all the cows and recording all the heats on HerdApp. That will bring us to the 27th of April, which is the start date for AI.”

- Advertisement -
Previous article
New conservation plan to create 70 jobs in the Midlands
Next article
VIDEO: Selling close to 5,000 cattle at a mart in one day!