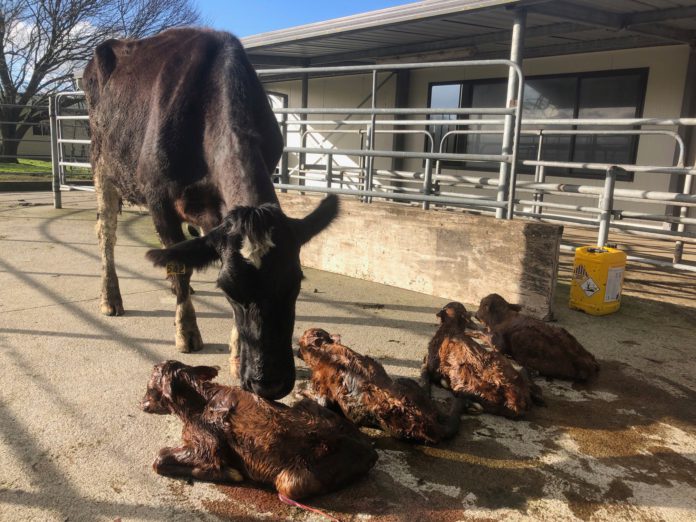 Anexa Dairy Vets, in a post on social media, said: “One of our farmers just calved this cow.”
“Quadruplets are very rare and it’s nice to see a happy mum and 4 happy heifer calves. I think mum has deserved a starter drench – make it a double.”

“Although she was big, the farmer was not expecting 4 calves! Our mumma cow has spent the night in a warm barn.”

“She has had starter drench with all the goodies, and, of course,access to plenty of feed. All four calves were given colostrum and are doing well.”

In February 2017, identical quad heifers were born on the farm of Tom Clair in Lahinch in Co. Clare, as reported by us here.

It is understood that the likelihood of four identical heifer quads is one-in-a-billion.

Tom suspected that Bawny – a Hereford-cross – was carrying twins, although she was not scanned.

Jenny, Rosie, Mia and Fluffy – which are sired by a Charolais stock bull – a Cottage Devon son – have since became mothers themselves, with some having twins.