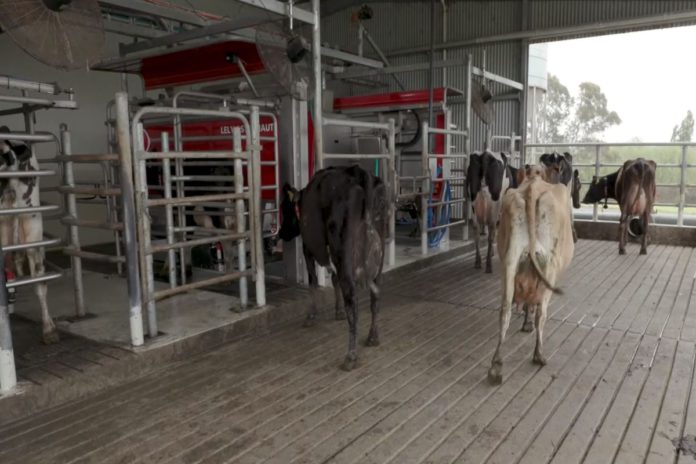 Phil and Symone Vines from Simpson, Victoria, Australia milk 280 cows on 120Ha. They use a robotic milking system on their pasture-based farm.

They had originally planned to build a conventional herringbone parlour on their farm, but some helpful advice got them thinking about robotics.

“We had drawn up some plans for a herringbone dairy. We went to the bank manager to talk about that and he said to us ‘I think the two of you should look at a robotic milking system’.” Symone said.

“Like many people, we assumed it was out of reach for us, that it was some sort of luxury. When we looked at the price of how much it would cost to build a brand-new conventional dairy, there wasn’t a lot of difference. We were quite surprised at that.”

The move to robotics has had a huge impact on their lives and even led Symone to change career. “I was an office girl and there was something about this system that changed me. I left my job and now I potter around the farm all day, 7-days-a-week. I just love the system.”

“The transition was quite seamless. I didn’t have any expectations. We took our time and it was quite slow, but they took it up a lot quicker than a lot of people would have expected.”

The Lely milking system has seen an increase in milk output on the farm and the Vines family believe it’s the perfect system for their farm.

“We’ve seen a 15% increase in production since we started and that’s been under some challenging situations with the weather.”

“For a small pasture-based farm, this is the perfect milking system.”