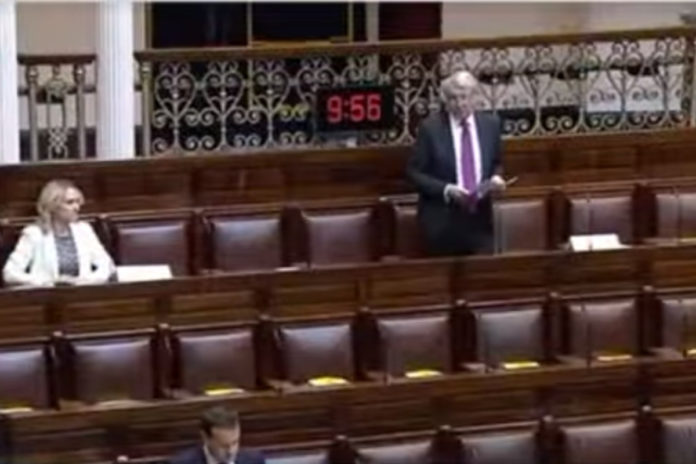 In the Dáil in recent days, Michael Lowry, Independent TD for Tipperary, raised the issue of Brexit with An Taoiseach, Leo Varadkar.

Lowry described the impact it will have on the Irish economy in conjunction with the effects of COVID-19 as a “double whammy”.

The Independent TD questioned if the COVID-19 crisis has influenced the Government’s Brexit strategy and if the Government can provide a commitment to maintaining all existing Brexit funding and support programmes considering the cost of the COVID pandemic.

Varadkar responded to his enquiries, saying “So far, the Covid-19 crisis hasn’t influenced our Brexit strategy, but it does fundamentally change the context, because it has totally changed how trade works, the state of our economy and our physical capacity”.

“I can provide a commitment that we will maintain all existing Brexit funding and support programmes, notwithstanding the Covid pandemic, but some of these are going to be matters for the next Government,” he explained.

Addressing the Taoiseach, Lowry stated: “The EU has wisely advised that Britain extend their transition period to avoid compounding the economic damage caused by the Covid pandemic with a rushed Brexit. Prime Minister Johnson has stated on several occasions that he is adamantly against seeking any extension.”

“This intransigence leaves us with a huge dilemma. The Political Declaration envisages a no-tariff/restriction-free trade regime for agri-food and manufactured products on the island of Ireland. However, the Declaration also requires the UK to achieve regulatory and technological alignment with the EU to avoid EU-UK tariffs.”

Lowry said that this remains a major problem, as there is no clarity surrounding how this will be achieved in such a short space of time.

“As of now, the UK will leave the Single Market and the Customs Union on 1st January next. It begs the question of how advanced are our preparations to implement new measures around customs procedures, regulatory checks for goods, foods, animals and bloodstock crossing the Irish sea.”

“The timeframe for preparations and action is now very limited. The outcome of EU/UK talks on a future relationship is of critical importance to Ireland. It has the potential to have a devastating impact on our economy”

The Deputy then asked whether the agri-food sector would be receiving any assurances over the support they will receive ahead of the end of the transition period on December 31st.

“When will businesses know the details regarding the checks and controls and when do you anticipate that the EU and UK agree these issues. Do you accept that these decisions need to made soon in view of short “lead-in time”, so that the necessary customs and duties infrastructure are in place. Business needs certainty about these issues” he queried.

Concluding, Michael Lowry said the political declaration envisages a restriction-free trade regime for agri-food and manufactured products, but this requires the UK to achieve regulatory and technical alignment with the EU.

He asked: “What progress is being made on the implementation of the Irish Protocol of the Withdrawal Agreement in respect of controls and checks between Great Britain and Northern Ireland and to outline their implications for the Republic?”

Thanking Deputy Lowry for raising the matter of Brexit, Leo Varadkar responded that he can give an assurance to the Agri-Food sector that they will be sufficiently supported in the transition on December 31st.

In relation to checks and controls, he stated that he did not know for certain, but “always envisaged that it would be done by June or July before the traditional summer breaks, thus giving businesses a good six months to prepare for any of those changes that are going to take place, but they are not agreed yet.”

“I totally agree that business needs as long a lead-in time as possible,” he concluded.

- Advertisement -
Previous articleCarbon tax increase – what impact will it have?
Next articleRetailers have a ‘key role’ to play in resolving the issue of price – Rabbitte