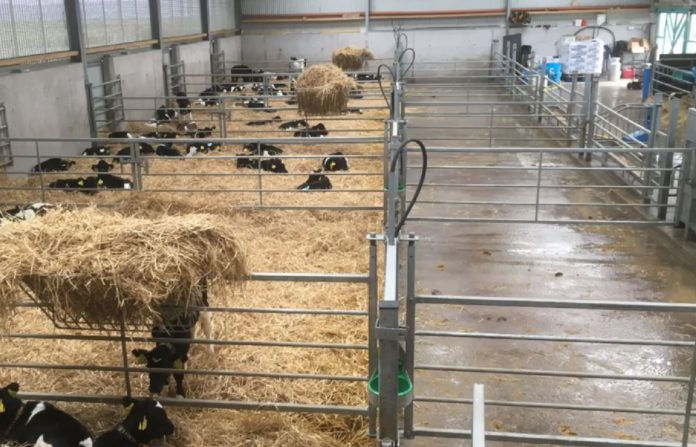 Aidan Dineen constructed a new calf house three years ago in order to make life easier and to reduce labour and disease issues.

The Kerry Agri-business supplier explained that the work was undertaken as the herd’s 6-week calving interval had improved and to accommodate for all calves, which are retained on-farm until they reach 12-months of age.

“The heifers are reared on a calf feeder and are fed milk replacer, while the bull calves are fed milk from the parlour and later on, they are on milk replacer as well.” Dineen explained in a video released by Teagasc.

Aidan visited a number of calf houses across the country to seek inspiration for his farm. “When we were looking at the shed, we went around the country and saw three or four calf houses that were something similar to this.”

Some of the features in Aidan’s shed include a bedded lie-back area, a clean area for calves to stand while being fed and channels on the shed floor.

“The gates can be locked in and the calves can be locked to the front, while the back of the shed is being bedded.” explained Aidan, who added that the current set-up reduces labour and makes tasks such as cleaning and bedding pens easier.

“We didn’t install any single pens – we went with small group pens that can hold five calves. It is easier to train five calves at a time, rather than trying to train one calf.”

As animal health and welfare is paramount on this enterprise, Aidan intends to install a mechanical ventilation system this spring.

Marts ‘look forward’ to full business as usual next autumn