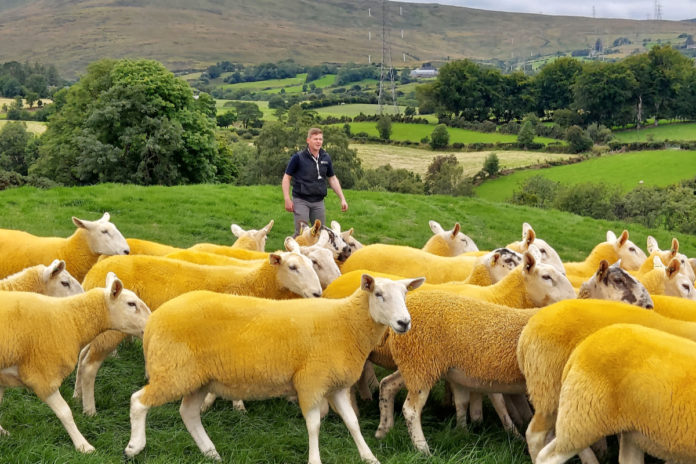 VIDEO: How this farmer achieved a 12% increase in his flock’s scanning rate

Prior to this, he spent seven to eight years gaining invaluable experience working on and managing various sheep and beef farms across Great Britain before returning to the family farm, where he works in partnership with his father and twin brother, Jonathan as Crockataggart Farms.

Throughout August and September, he will be selling gimmers through local marts, getting 2020-born lambs finished and making plans to get next year’s breeding ewes ready for tupping.

With over 750 breeding ewes and 600 gimmers grazing predominantly hill and mountain ground at the minute, Eoin wants to maximise the returns from this large flock, so a big focus is placed on animal health so each sheep has the best chance of hitting its potential.

Two key areas at this time of year are reducing flock lameness and boosting their vitamin and mineral status.

All sheep groups are regularly footbathed; at least every fortnight and every time, a mob is gathered for dosing, vaccinating, or moving.

Provita Hoofsure Endurance is their footbath solution of choice as it is easily mixed, sheep can be simply walked through it and it is proven to be very effective.

Hoofsure Endurance is a concentrated solution requiring only 1 litre in 100 litres of water making it very cost-effective.

The farm also uses Hoofsure Combat spray for scald and foot rot cases on sheep that are noticeably lame.

Eoin is quick to point out that taking a preventative approach with regular footbathing saves a lot of labour in the long run because they have to catch fewer lame sheep and the sheep are standing and moving correctly.

Despite the recent wetter conditions and muddy areas in fields, lameness has not spiked within the flock and Eoin puts that down to consistent use of Hoofsure Endurance.

As the summer grazing season starts to come to an end, grass quality will begin to decline, resulting in trace element intakes also dropping.

This can have a bigger impact in hill ground, which is generally poorer in nutritional value, which can impact the thrive and weight gain of all stock – especially lambs.  Therefore, Eoin and his brother will give lambs born this year at least three vitamin/mineral drenches, at ‘marking up’, shearing and weaning with Provita’s high spec 26 trace element ProVitaMin.

This will boost the lamb’s trace element levels, so they make the best use of forage intake to keep putting on plenty of much-needed weight and flesh.

Also, gimmers presented to sales will also be drenched with ProVitaMin to give them that attractive bloom and tightness in the fleece.

Furthermore, buyers should be confident that the sheep should suffer little setbacks and continue to perform when introduced to their own flocks.  Customer satisfaction is important to Eoin when selling any of his stock.

Tupping at Crockataggart farms starts late October aiming for early April lambing onwards.  Although pre-tupping planning starts now, with breeding ewes selected and then in mid-September, all ewes and rams are given a pre-tupping ProVitaMin drench to optimise fertility and boost scanning rates.

Eoin was happy to see the first year using ProVitaMin generating a 12% increase in scanning rate, hence why it continues to be a part of the pre-tupping schedule.