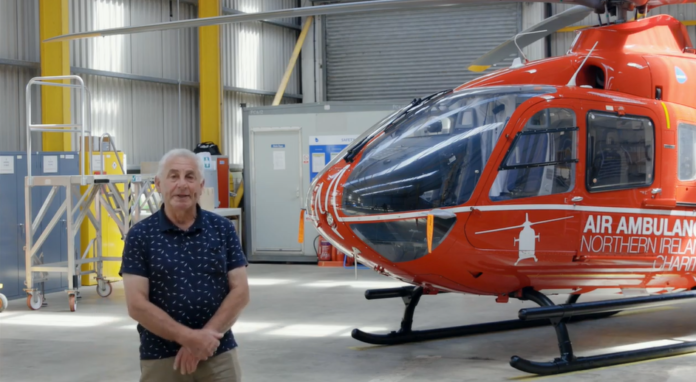 In this video, released by Air Ambulance, he explains how the accident unfolded,

“I went up a ladder to cut strings on a big bale of straw to throw down to bed calves with and as I was cutting the strings on the bale of straw, it catapulted me off the ladder.”

“All I know that I was fit to make a phone call to my son, who was leaving my grandchildren to school.”

His son did not know what was wrong but phoned the emergency services. “He phoned the ambulance, but I know nothing after that.”

David was sedated at the scene of the accident and was brought to hospital by Air Ambulance Northern Ireland “as quick as they could because it was between touch and go”.

He sustained injuries to his spleen, leg and head and had broken ribs.

“The doctor’s biggest worry was about my spleen and the damage my ribs would do to my spleen.”

“The doctor said if the spleen holds, it will be alright, but if it doesn’t hold, it is all over.” explained David, whose spleen was removed following surgery.

Speaking about his recovery, Thompson said: “I never thought that I would be laid up for a year. I have been trying my best to keep going.”

“My recovery shocked me, but I am here and I am more than thankful for AANI, doctors, consultants, people I have met through my term of recovery.”

“I went through accidents before, but never nothing like this.” he added.