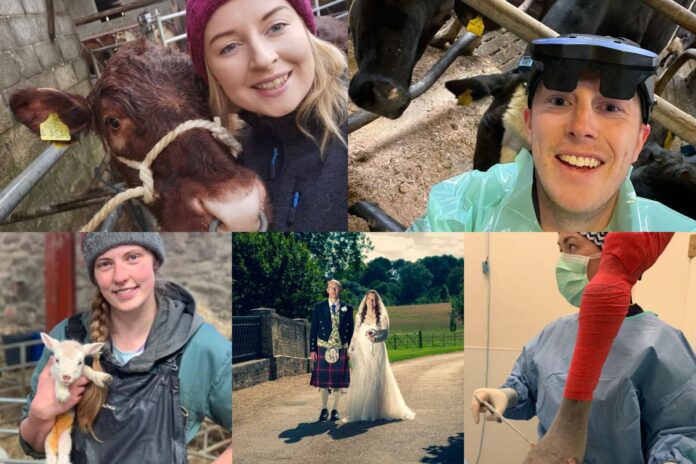 5 of our most popular vets

That’s Farming previews some of our most popular veterinary profiles of 2022.

Aoife Ferris hails from west Limerick, but is currently practicing as a mixed animal vet in Northern Ireland.

She has been residing and working in Co. Fermanagh for over five years for Lakeland Veterinary Services in Belleek.

Having seen practice with her local vets, Raymond Fitzell and Derek Long, she was set on veterinary medicine at UCD School of Veterinary Medicine, Dublin, thereafter.

She graduated with an M.V.B degree in veterinary medicine in 2017, having enrolled in the course in 2012.

There is only one university that offers a degree in veterinary medicine on the island of Ireland, so it was the only option for me applying through the CAO.

“I was very young, starting college – I completed my Leaving Certificate at 16 and turned 17 that summer. So, I was 17 when I moved to Dublin and started studying at UCD to become a vet.”

“I have worked in Lakeland Veterinary Services since I qualified. We are a truly mixed practice. For the first three years, I mainly did large animal work with routine small animal work also.”

“However, changes within the practice led me to take on a further role within our small animal branch. I briefly locumed before working with Lakeland Vets, which provided me with a steep learning curve, to say the least.”

Crawford is Royal Veterinary College graduate, and sheep farmer, currently working as a self-employed veterinary anaesthetist whilst studying for a PhD in conjunction with Harper Adams University via distance learning, exploring medicine use in the Northern Ireland sheep flock.

He has had a colourful career, as after graduating, he moved straight into work at Glasgow Vet School, working in anaesthesia and critical care.

His role was a” little different from the stereotypical new vet job”, as he was working in a university teaching hospital.

“I love the challenge of being a vet. The field is constantly evolving, and you do not have time to sit on your laurels.”

“I do not think I would cope too well with a 9-5 office job. Furthermore, I love being with animals and meeting people from all walks of life,”

“I am proud to be a vet and farmer and am relishing the challenge of tackling sheep scab in Northern Ireland with the indomitable sheep farming community.”

Also based in Northern Ireland, Adam Conn, who has 13 years experience as a vet.

Experiencing first-hand visits from the local vet on the farm since seven-years-old and assisting during lambing season played a fundamental role in Adam’s career choice.

In 2004, Adam (36) applied to the University of Glasgow after finishing his A levels and studied veterinary medicine and surgery [BVMS] from 2004 to 2009, where he graduated with a commendation.

He finished his final year in university and then travelled to Dublin to complete his North American Veterinary Licensing Examination (NAVLE) to work in America.

He previously completed a three-month stint in California, but Riada Veterinary Clinic in Ballymoney, Co. Antrim, approached him during his exam preparation with a veterinary job offer, and “the rest is history”.

City born Timmerman “did some work experience at a local veterinary practice and never looked at any career path after that”.

She studied veterinary science with an intercalated masters in global wildlife health at the University of Bristol from 2011 to 2017.

She applied on a deferred application so that she could take a year out while knowing that she had a place at vet school and spent most of the year travelling while working in Zimbabwe, Canada and the UK.

After graduating, she worked in a small mixed practice in West Wales for 18 months which “helped me understand that farm animal work was what interested me the most”.

Currently, she is locuming, whilst completing a Nuffield Scholarship, looking at reducing anthelmintic usage in sheep.

Since starting it in November 2021, she has worked in several different practices from South Wales, Shropshire and up to Orkney.

Regardless of the intense working environment, erratic emergency calls and long hours, Ann Derham, equine surgeon, has reached a peak in her career.

Following graduation, Ann gained invaluable experience across some of the top-class equine surgeries worldwide. She returned to Fethard Equine Hospital, where she initially began her career in equine veterinary medicine.

Ann, who grew up in Skerries, Dublin, has not directly been involved in the agriculture industry, but talks of her brother’s keen interests in ponies, as well as her father’s pre-veterinary experience.

“I always had an interest; I loved the idea of becoming a vet. However, I never thought I would get the points, as each year the CAO requirements kept getting higher,” Ann, told That’s Farming.