That's FarmingThat\'s Farming Irelands Largest Farming News, Properties and Classifieds Network
HomeFarming News‘Vertical farming is far from perfect, but it has the potential to... 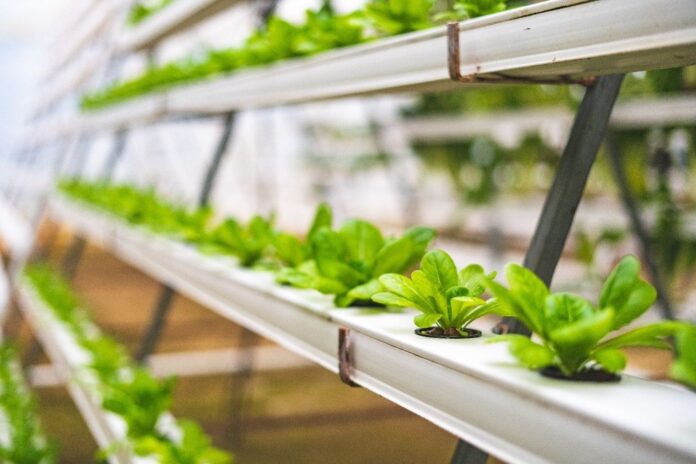 ‘Vertical farming is far from perfect, but it has the potential to transform agriculture’

In this article, Brushtec outlines some ways that vertical farms could mean a more sustainable future for British agriculture.

Also known as skyscraper farming, this method of crop production utilises vertical space to improve yield while reducing the amount of land required.

In its current state, vertical farming mostly focuses on leafy greens and fresh herbs, but as it allows total control over the growing environment, it can also provide out-of-season fruits — such as strawberries in winter — and more exotic produce.

Vertical farming yield is not dependent on weather, climate, or quality of land, and it can provide reliable and consistent year-round crop production.

The key concept of vertical farming is that it is a way to grow more crops per field or patch of land.

By ‘growing upwards’, vertical farms can have an increased production per square foot than traditional methods, which improves yield while saving space — a precious commodity here in the UK.

Vertical farming may reduce the environmental impact of agricultural activity and help to improve biodiversity because farming at this scale does not cause the same amount of land surface disturbance.

This may support local flora and fauna, avoid deforestation, and reduce the reliance on cultivated land for food production.

That said, care must be taken to only build vertical farms in ways that does not impact local wildlife and biodiversity.

Building over farmland is not the ideal, but rather looking for opportunities to create vertical farms on brownfield land or in urban areas.

Vertical farms allow farmers to control all aspects of crop growth, including humidity, temperature, light, and the amount of nutrients each crop receives.

This means that the UK can enjoy more exotic or out-of-season produce without having to import it from other countries.

Avoiding importation is great for the planet, but it also means that the UK can be more self-sufficient and less reliant on international trade lines that can be easily disrupted.

We have seen this recently as a result of the pandemic, the blocking of the Suez Canal, and the war on Ukraine.

Growing more crops closer to home also has an undeniable impact on food miles. Food produced in the UK for consumption in the UK reduces transportation times and costs as well as the farm’s carbon footprint.

Planes, ships, and other long-haul transportation methods can be used less and less as vertical farming takes off.

Shortening the distance that crops need to travel can also help keep food fresh without the need for refrigeration, further decreasing the carbon footprint of a vertical farm.

As they do not need fields to grow, vertical farms can be installed in urban areas, allowing fresh produce to be closer than ever before to the consumer.

Even hydroponic farms, where the crop is suspended in water rather than soil, use less water because only the exact amount of water needed per plant can be distributed due go the controlled environment.

And, because the water used in hydroponic crop production is usually clean after use, it can be recycled and reused, which further reduces waste.

One major criticism of vertical farming is that the buildings require electricity to run crucial elements such as lighting and heat.

However, these farms have the potential to be managed using green energy only.

With smart systems in place, energy consumption can also be monitored, evaluated, and made more efficient where possible.

What is more, vertical farms may be artificially lit with energy-efficient LED lights, but many simply use natural sunlight to grow their crops.

Because the plants in a vertical farm are grown inside, there is no danger of fertiliser run-off polluting nearby land and rivers.

In fact, many farms do not use soil or fertiliser at all, opting for hydroponic or aeroponic methods instead.

This principle works in reverse too, as there is no risk of contaminated water from nearby livestock or wildlife making its way into the farming system.

There are also fewer potentially polluting pesticides being used, as the absence of insects and other pests in this controlled environment means they are not as necessary as they are in an open field.

“Vertical farming is far from perfect, but it has the potential to transform the UK’s agriculture and improve the sector’s eco-credentials.”

“From reducing our carbon footprint to increasing sustainability, there is a lot to be said for growing upwards.”

“Most vertical farming in the UK grows salad leaves and herbs such as basil.”

“However, root vegetables, strawberries and other fruits are also well on their way to being vertically farmed on a large scale.”

“One of the most exciting effects of vertical farming could be the increase in quality of British grown crops.”

“With more humidity, heat, and nutrients, we could see even better food than we are used to grown close to home.”