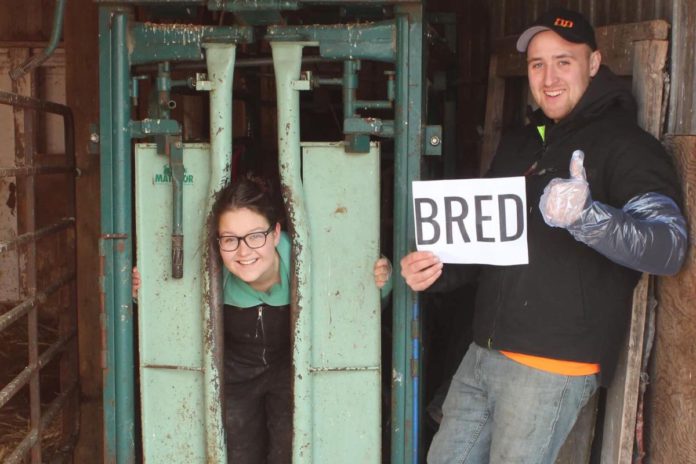 A couple have embraced their creative nature to announce that they are expecting a baby in July, a year-and-a-half after getting married.

“A friend mentioned they’d saw this idea for our baby announcement, and I thought it was fitting because everyone who knows me, even a little, knows that all I think about is cows!” Kaitlyn told Catherina Cunnane – That’s Farming.

“Most people think the picture is funny, especially the people from around where I’m from!”

“Some just don’t really get it, so they just looked confused when they look at the photo, but we have received no negative comments,” she admitted.

Kaitlyn, who grew up on a beef and milking sheep farm and studied dairy herd management, met her husband, Ty, the first time she travelled to Manitoba, Canada to visit her cousins. “He was my older cousin’s best friend and I just thought he was adorable.”

The duo maintained their friendship, and when Kaitlyn finished high school, she moved away from Ontario, Canada to Manitoba to work on a dairy enterprise.

“We then started dating, got engaged about a year later, and now have been married for a year-and-a-half.”

“Our baby is due on July 8th so we are looking forward to the next chapter,” Kaitlyn concluded.