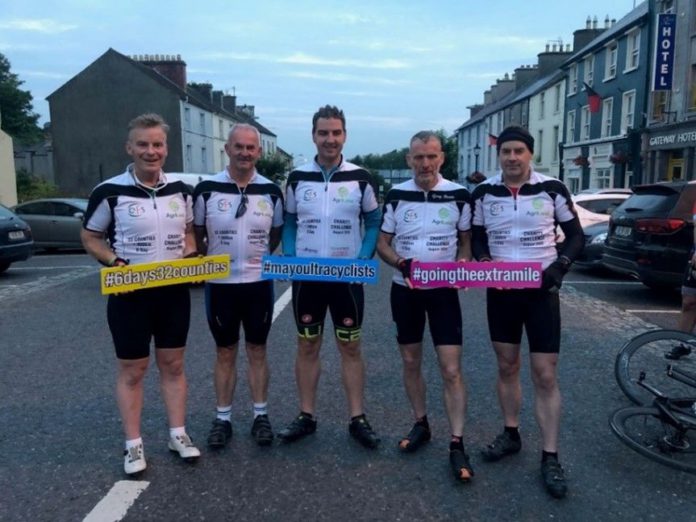 Alan Heaney, the co-owner/founder of Lely Center Mullingar, is among those who will take on a 2,100km challenge along the Wild Atlantic Way later this month.

The Mayo native is part of the Ultra Cyclists, a group of like-minded adventure cyclists who take on an ultra-cycling challenge every year for charity.

Last year, despite adverse weather conditions, they had a very successful campaign on their 32-county adventure.

On Sunday, July 18th, 2021, they will set off again on an ultra adventure along the iconic and scenic Wild Atlantic Way.

They will depart from Kinsale in Co. Cork and cycle north along the west coast to Derry city through Cork, Kerry, Clare, Galway, Mayo, Sligo and Donegal – a staggering 2,100km, which they intend to complete in just 6.5 days.

The cyclists have self-financed the events and donate 100% of all proceeds to all deserving charities. Lely Mullingar and Efficient Farm Systems are among the companies that have sponsored the event.

In a statement, the group said:

“It has been a difficult 18 months for people locked up in their communities, having to give up normal activities and hobbies.”

“With that, this year’s theme is based on promoting self-care – physical fitness and mental wellbeing.”

The group has chosen three charity partners who offer confidential support to all people in need;

“All offer fantastic confidential mental support services to young people who are struggling with isolation and mental health.”

They encourage sports enthusiasts – footballers, cyclists, runners, triathletes etc. to join in and participate in two of the stages – day 3 & day 4.

On Tuesday, July 20th, on day 3, the stage from Castlegregory, Co. Kerry to Oranmore, Co. Galway, the ultra cyclists will be joined by industry colleagues (farmers, vets, co-ops, agri tech, feed, finance and animal health companies etc.) who will join in and cycle a 65km leg or two and maybe the whole 320km stage.

A team from Macra na Feirme, including president John Keane, will be present that day to support these worthy causes.

“We are very appreciative of all the support from our sponsors, donators, followers and particularly, the farmers who have been very generous and supported us along the way.”

“This year, it is going to be bigger and better. We are attempting to cycle the 2,100km of the Wild Atlantic Way in just 6.5 days, a huge task.”

“However, there will be great fun and banter on days 3 and 4. We encourage all cycling enthusiasts to come out and join in for a 65km leg or a full 330km stage.”

- Advertisement -
Previous article
Breeding heifers to €4.45/kg at Carnew Mart
Next article
Heifers to €2,150 and culls to €2,190 at Headford Mart