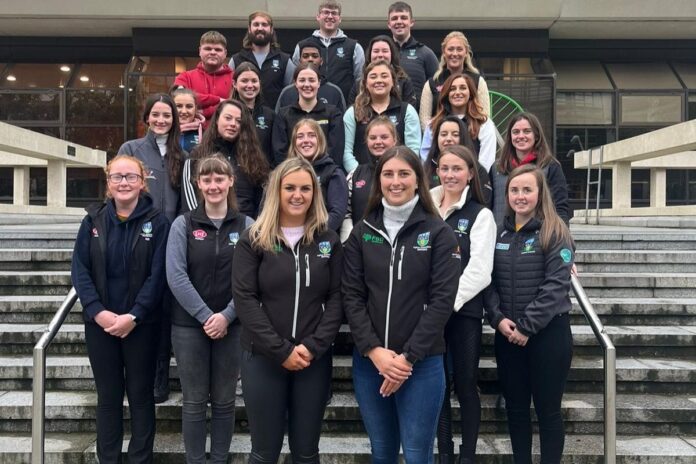 UCD AgSoc has elected its 2022/2023 committee, which Ciara Byers – who previously featured on That’s Farming ­– will lead as its auditor.

The committee comprises students from all years and agricultural degree programmes within UCD’s School of Agriculture and Food Science, who liaise with classmates about upcoming events.

The committee is formed at the start of each school year via an in-person voting process.

The auditor, treasurer and careers officer are voted in the previous year for them to shadow and see what will be expected of their role when they take the reins in final year.

Their first call of duty is to organise the vote of the rest of their committee, the result of which is as follows:

“This year marks 100 years of UCD Agricultural Society, a society well-known for raising money for two chosen charities each year through several student-organised events such as nights out around Dublin, mystery tours and the very popular Ag Ball.”

“Profits from our on-campus Ag Soc shop, which has deals such as tea and a snack for €1, also contribute to the funds.”

“This year’s charities are the very worthy MS Ireland and Tiggy’s Trust. Both charities hold a special place in society members’ hearts and often have an agricultural theme.”

According to Scully, the biggest attraction is Ag Week which the society holds after Christmas in semester two.

The week-long festivities welcome events on campus between lectures, such as the milk race and live music organised by the society.

She continued: “Semester two also traditionally sees our grand raffle, where Irish companies generously donate prizes, which will be up for grabs by anyone who buys a ticket, society member or not. Keep an eye out for us in your local mart.”

“In conclusion, the main aim is to have as much fun as possible raising as much money possible for charity each year, and we hope to live up to the high standard that the years previous have set,” she concluded.

In recent weeks, we interviewed a representative for UCD School of Agriculture and Food Science, who discussed studying ag science, progression routes and opportunities for graduates.

You can read this news article.

- Advertisement -
Previous article
‘Things have become much tougher for me on the farm since my father passed away’
Next article
‘Whether it is rewetting or culling of herds, farmers are being shoved off the land’