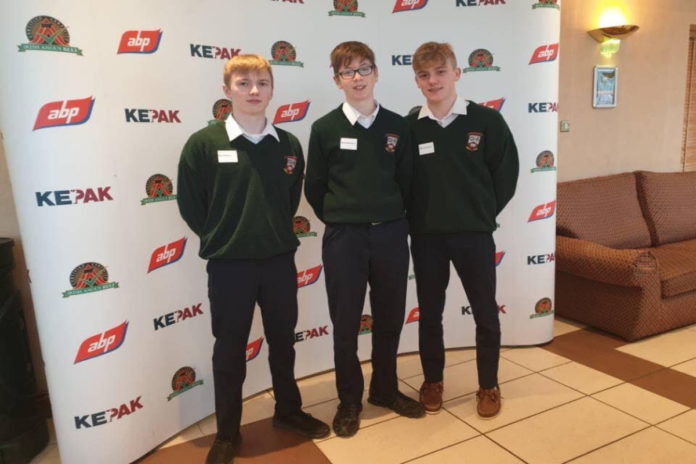 Three students from Borrisokane Community College are looking to get their hands on first place at an awards ceremony tomorrow, (Wednesday, March 4th).

Transition Year students, Dylan, Chris and Luke are aiming to come away from Croke Park tomorrow, with victory as a reward for their hard work and dedication.

The Borrisokane students became involved in the competition in order to gain some practical knowledge to accompany their classroom learning.

“We decided to enter the competition because we all have an interest in farming and wanted to learn more about Angus beef.” the students told That’s Farming.

With the help of their agricultural science teacher, they decided to focus on sustainability as the theme for their project. They believe this is a topical issue in farming at the moment. “We thought it would be interesting and very useful in everyday farming life.”

There is a four-stage process for this competition, the first being a video about their reasons for entering the competition, as well as details of how they were going to promote Irish beef.

Stage two saw the candidates being interviewed by representatives from the sponsors of the competition; KEPAK, ABP and the Irish Angus Producer Group. The third stage involved creating a project for submission to the competition judicators for review.

During the research stage of their project, they had the opportunity to meet with many important figures in the beef industry as well as the media.

“We invited Colin Duffy, chairman of the Irish Angus YDP, to speak to our ag science class. We did an interview with Jim Finn for Tipp FM and we went on a guided tour of ABP Nenagh to see how the Irish Angus beef is processed.”

“We have also met with Michael Lowry TD. We organised to meet him in Cloughjordan to talk about our project,” they added.

After successfully completing three stages, the Borrisokane TY students been invited to the final in Croke Park where they will be competing with 30 other schools for the top prize.

Being the first students ever to represent their school in such a renowned competition and to have gotten this far, brings great satisfaction to all three.

They also believe that the experience that they have gained along the way is “invaluable”. “The competition gave us a chance to research and visit places outside of school that we would not have got otherwise.”

“We have all gained a greater interest and Dylan is enjoying farming more. We found people to be very helpful and realised the amount of work, time and dedication it takes to rear and look after cattle. Animal welfare is of the utmost importance to produce Premium Angus beef.”

Dylan, Chris and Luke are hoping to be one of five winners selected at tomorrow’s event. If they are successful, they will be presented as winners at the National Ploughing Championship in September 2020.

If you want to find out more about their project, see Facebook. check out their Facebook page.

- Advertisement -
Previous article
‘The minimum rate for any tractor leaving a contractor’s yard should be €50/hour’
Next article
How much should I pay to mow, bale, wrap and stack silage this year?