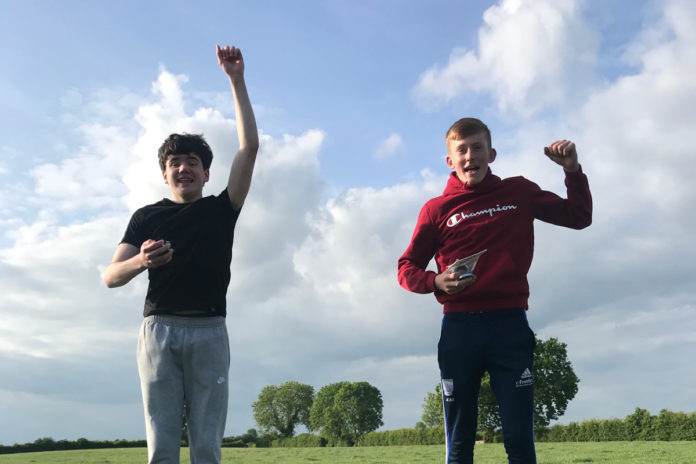 At just 16-years-old, Daniel Ruddy and Jack O’Mara have taken the agricultural innovation scene by storm with their invention – The Handy Hose Holder.

The transition year students from CBS Thurles recently won the Student Enterprise Programme national competition, which is run by the Local Enterprise Offices, with their invention and have begun to build a successful business for themselves at such a young age.

The young entrepreneurs told That’s Farming’s Cian how the idea was born.

“I was working down in my father’s farm over the summer and I wanted to make something for the wash-down hose because he was bending down to pick it up multiple times and it was straining his back.”

“We went about brainstorming ideas after that, and we identified the steel railing on the milking parlour and thought we could stick a magnet there.”

They then went about creating a product that would serve as a holder for the hose, using a magnet to keep it up off the ground and prevent back strains.

The result was their magnetic hose attachment which is specifically for hoses in milking parlours, allowing them to be attached to any metal surface within the parlour; this enables the farmer to leave the hose off the ground, cutting out constant bending over, keeping the hose clean and avoiding trip hazards in the parlour.

The invention was being trialled on the farm for a number of weeks before the idea to enter the Student Enterprise Programme came about.

“The competition is run in our school every year and when you’re in transition year it’s one of the programmes we got involved in.”

“We talked about it and thought about ideas that we could enter, and this seemed to be the perfect fit for it.”

Once they had been put forward by their school, the next stage of the competition involved competing against other schools in their county of Tipperary.

“The county final was meant to be on the day before all the schools went into lockdown. That was cancelled in the end but we were told that we had won and would be going onto the national final.”

“After that, it was a matter of competing it going through the virus. The livestream for the national final came along then and we found out that we had won it. It was brilliant.”

The potential of their invention hasn’t stopped at the competition. The two young men are continuing to improve their product as well as market and sell it across the country.

“We had it tested in Moorepark. It wasn’t 100% so we knew we had some work to do with it. We went and got better parts and improved it. We used all the feedback we got to improve it and now the feedback is mostly positive and we’re happy enough with how it’s going.”

Before the COVID-19 restrictions were put in place, they had sold 200 units and have continued to sell throughout the lockdown.

“We’re getting it into shops more and more and trying to make it easier for people to get their hands on it. Right now, we’re delivering to doorsteps and people can contact us on Instagram or by phone and from there we will get it sent over.”

“Hopefully, we’re going to keep this going for the foreseeable future,” they concluded.

If you want to learn more or order a Handy Hose Holder, click here.