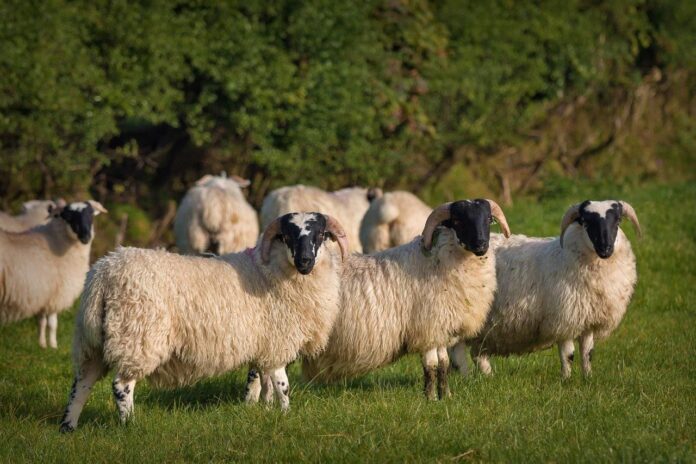 Should I tup my ewe lambs this year?

In this news article on That’s Farming, Stephen Flanagan, CAFRE Beef and Sheep Adviser, explores the question on many farmers’ minds: should I tup my ewe lambs this year?

This is something that many farmers toy with the idea of coming up to the normal tupping time of October and November.

In reality, you should ask this question at weaning time to allow the correct management of that animal before tups go out.

With a higher-than-average cost of replacements this year, many farmers are thinking of retaining more ewe lambs to breed from rather than selling them as fat lambs.

With good husbandry and nutrition, lambing ewe lambs could improve the financial viability of sheep systems and reduce the number of breeding females you keep or buy in the following year.

A major benefit of a ewe lamb breeding system is that the generation time is reduced by a year allowing for faster genetic progress.

This leads, in turn, to improved live weights, reproductive success or crossbreed trait benefits for the flock.

The success of such a breeding programme involving ewe lambs requires careful management and attention to detail.

Careful management is needed from weaning time for these ewe lambs to allow them to reach 60-70% of their mature bodyweight before tupping.

To achieve this, regular weighing is essential. This target is required to maximise conception rates and ensure good foetal development.

However, heavy feeding of very young female sheep (younger than five months of age) can reduce mammary gland development and subsequent milk yield, so is not advised.

For example, a Texel-cross-Mule ewe lamb with a potential mature weight of 75kg must be between 45 – 50kg at the time of tupping.

Correct ram selection is vital when breeding from ewe lambs. Mate ewe lambs to ram breeds with a smaller than average mature size.

Ideally, farmers should be using a ram with known Estimated Breeding Values (EBVs) for maternal traits such as lambing ease, coupled with their own judgement and use breeds with evidence of lower birth weights.

Albeit the sourcing of rams with EBVs in Northern Ireland is difficult due to the relatively small numbers of pedigree breeders’ performance recording, it is something worth considering.

The lower initial reproductive performance of ewe lambs has multiple factors involved, with one being the age of onset of puberty.

Whilst this can occur between 7 – 10 months of age (it can be brought on earlier with the interaction of teaser rams), not all ewe lambs will achieve puberty within a selected breeding window, causing an initial loss of potential productivity.

Furthermore, ewe lambs are described as ‘shy’ breeders due to the combination of shorter, less intense oestrus periods and being less likely to seek rams compared to mature ewes.

If using teaser rams, leave in with ewe lambs for 14 days before introducing fertile rams.

Studies suggest rams have a preference for mature ewes over ewe lambs (potentially due to difficulty mating).

Therefore, ewe lambs need repeat serving and require separation from mature stock to improve conception success. The ideal group size is one ram to 25-30 ewe lambs and grazed in smaller fields or paddocks.

Post conception, lower embryo survival has been demonstrated, with studies suggesting a greater than a two-fold increase in embryonic losses from ewe lambs when compared to mature ewes in the first 30 days following conception (J.P.Hanrahan).

To help counteract this, for a few weeks at tupping, graze on lower grass heights of poorer nutrition to help slow down the amount of hormones filtered out by the liver, which in return will hopefully result in higher scanning results.

This is a delicate balance as ewe lambs still need to be gaining at least 250g/day for a further six weeks post tupping and then lowered to 130-150 g/day up until six weeks before lambing to aid embryonic survival.

Scanning and nutrition during pregnancy

Scanning should take place around day 60 of pregnancy which then leaves enough time to manage them accordingly for either slaughter or to keep for a further year.

The scanning result also allows for a more accurate feeding programme based on litter size.

During early and mid-pregnancy, ewe lambs need about 20% more feed than mature ewes of a similar weight to sustain their continuing development.

Do not overfeed in the last week before lambing, and target feed only for maintenance and pregnancy, not growth. Feeding for growth at this point will create large single lambs and potentially increase lambing difficulties.

As in pregnancy, lactating ewe lambs require about 20% more feed than mature ewes of a similar weight to supply sufficient nutrients for lactation.

The farmer should be mindful that ewe lambs may have a higher risk of mastitis because the skin of the teat may not have hardened yet and is being exposed to certain bacteria for the first time.

In addition, the mammary gland will still be developing. First-time lambers also take longer to feed their lambs than older ewes, so increasing the risk of teat lesions and udder damage.

One further concern farmers have to breeding ewe lambs, is the thought that these ewe lambs will never reach their full potential in subsequent years.

Results from a study carried out by AFBI Hillsborough showed that ewe longevity was unaffected by age at first mating, with both ewe lambs and hoggets being culled at a similar rate each year.

Furthermore, both ewe lambs and hoggets reached the same mature weight (65.5kg on average), and thus age at first mating had no impact on ewe growth rate.

To allow ewe lambs to continue to grow and reach their potential target weights, weaning should take place when their lambs are between 10-12 weeks of age.

The introduction of creep feeding will also help to reduce demands and stress on the ewe lamb.

From an environmental aspect, breeding ewe lambs can provide additional benefits, for example, by reducing the farm carbon footprint due to the carrying of fewer unproductive stock to obtain the same output of lamb.

Those farmers who are part of the Business Development Groups (BDG) who already financially benchmark their business with CAFRE can also now get a carbon benchmark completed.

In conclusion, for those farmers who have already selected ewe lambs for breeding, here a few points to consider: