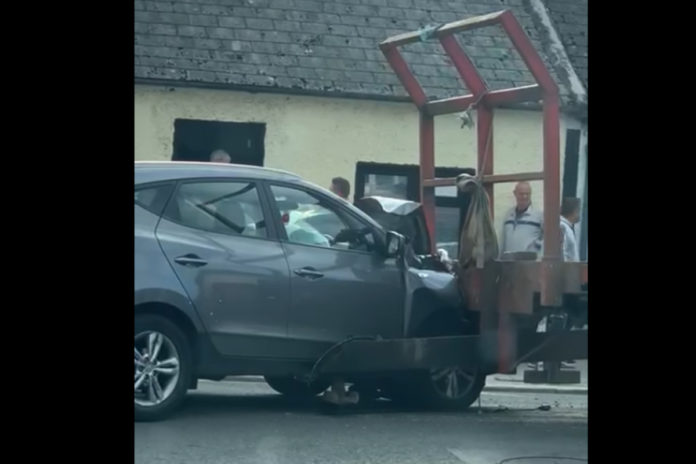 Two individuals were hospitalised after a trailer reportedly disconnected from a tractor and collided with an oncoming vehicle in Co Kildare.

The incident, footage of which has appeared on social media, occurred on Main Street, Sallins, earlier this week.

“Gardaí are investigating a road traffic collision that occurred on Main Street, Sallins on Wednesday, June 16th, 2021 at 7.15pm.”

“A trailer disconnected from a tractor and collided with an oncoming vehicle. The driver and passenger of the vehicle were taken to hospital for treatment of their injuries. Investigations are ongoing,” the spokesperson added.

Meanwhile, a male motorcyclist remains in a “serious condition” in hospital following a collision involving a tractor in Co Cork.

“Gardaí are investigating a serious road traffic collision, involving a motorcycle and a tractor, that occurred on the Bandon to Bantry Road (R568) just outside of Ballineen on 15/06/2021 at approximately 4.30 pm.”

“The motorcyclist, a male, has been taken to Cork University Hospital. His condition is described as serious.”

“The scene remains closed for a technical examination.  Investigations are ongoing. No further information is available at this time,” the spokesperson concluded.

Man charged after Gardaí find over €590,000 worth of cannabis in sheds

In other Gardaí-related news, a male has been charged after approximately €592,000 worth of suspected cannabis herb was discovered in Frenchpark, Co Roscommon.

It conducted a search operation in the village on Wednesday, June 16th, 2021.

A spokesperson said: “During the course of the search, a sophisticated grow house was discovered in the residence and external sheds on the property.”

- Advertisement -
Previous articleWest of Ireland farmers were ‘sold a pup’
Next article‘For traditional suckler farmers, costs are high, yet return on sales are generally low’