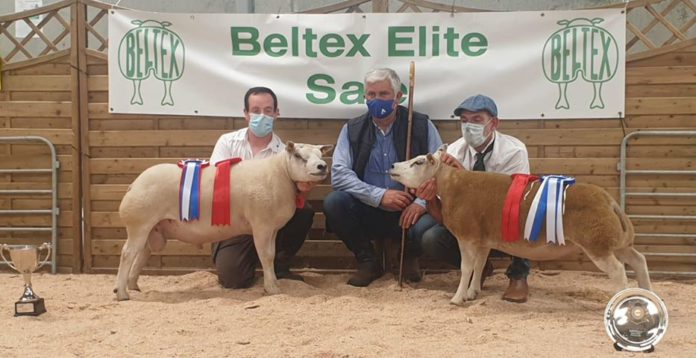 The sale topper at the Belgian Beltex Society’s elite annual show, which was held at GVM Mart, Tullamore on Wednesday (July 22nd), came in the form of a shearling ram from the Sheephaven Flock for Mr. Declan Robinsons, Letterkenny, Co. Donegal.

This ram, a full brother to the 2018 premier sale champion, stood third in the pre-sale show and after a flurry of online bidding, sold for €1,180 to Mr. Michael McGrath, Mullingar, Co.Westmeath.

The Donegal man also received €860 the second top price, for another shearling ram that heads to Waterford and breeder, Aeron James, Dunmore East.

Next up was Knockawuddy Edwald, which sold at the next highest price of the day at €800.

James Killilea sold his top lamb for €620, while Diarmuid Curran of the Stoney Road flock sold his second-prize winner for €600.

“This much-admired shearling, unfortunately, failed to meet his reserve in the ring and left unsold.” a society spokesperson explained.

In the female section, Sean Cuddy (second-prize winner) and Jimmy Burke (third-prize winner) both achieved €460 for their offerings, while Alan Cuddy sold his shearling ewe for €440 and Francis Lyons parted ways with his entry for €420.

First-prize winner in the female section and overall reserve champion was consigned by Mr. Brian Matthews and having failed to meet her reserve in the ring, sold quickly afterwards for €550.

“Even with COVID restrictions and an increased sale entry this year, an excellent sale clearance was recorded with the clearance rate up slightly on previous years.”

“Commercial sheep farmers also contributed hugely to the trade with commercial men buying a number of the top-priced males.”

“The number of customers, which travelled from all over the country while adhering to Covid-19 restrictions to source males and females this year, is a fantastic vindication of the hard work being put in by breeders and an indication of the continued growing interest and awareness of the Beltex breed.”

“A first for this particular sale was the inclusion of a small number of females which helped increase interest in the sale from both domestic and international customers.” the society spokesperson added.