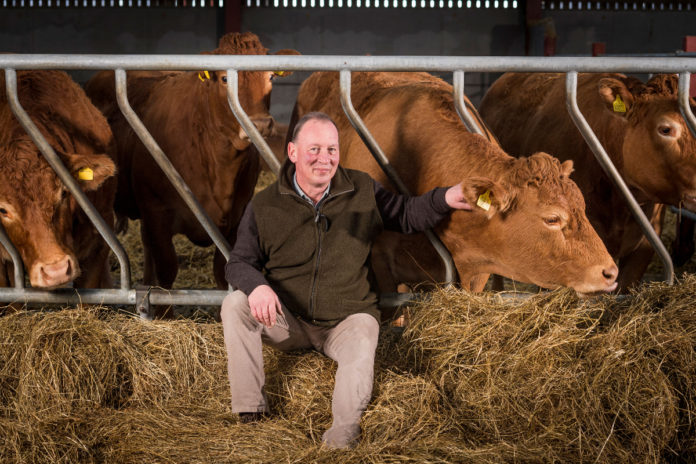 From humble beginnings, Tomschoice Limousins has become a household name throughout Ireland, the UK and further afield.

James Cooper runs the suckler enterprise, which is home to close to sixty pedigree breeding females, in partnership with his wife, Sarah, daughter, Laura and son, Ben.

Tomschoice Limousins at Hill Top Farm, Dacre, Harrogate, Northern Yorkshire, was established in 1996 with the purchase of one in-calf cow, Stoneleigh Ginger, to which the herd name owes its origins to.

“She was the pick of our friend Tom, who has since sadly passed away – she was Tom’s choice,” he explained to Catherina Cunnane, editor of That’s Farming.

The family has a strong association with the Limousin breed, having established base on 40-acres at Dacre in 1988 with some Limousin and Hereford-cross heifers.

Overtime, the enterprise has grown from strength-to-strength and now consists of circa 130-acres within a ring-fence.

“My father was a tenant farmer in Lincolnshire, latterly farming in partnership with my uncle and cousin. This was primarily arable with some suckler cows and sheep.”

“I have spent some time tracing back my ancestors to find that the Cooper family have been mainly farmworkers.”

His maternal family, Bradshaw and Doughty, were all farmers for many generations in Lincolnshire. “My father’s maternal line, the Mawer family, were mainly farmers.”

“Among them was my great grandfather, George Mawer, who was a farmer, miller and baker in Lincolnshire, just the same as I would describe myself.”

As James works part-time at Ripon Select Foods Ltd, flour millers and food ingredient manufacturers, where Sarah is the joint managing director with her brother Martin, simplicity is key when it comes to their farming system.

Laura and Ben are also involved in the company as production manager and supply chain manager after spending time studying at University in Edinburgh and Manchester.

All cattle on the farm are pedigree Limousins, with intentions to increase the herd size to approximately 70 cows in the coming years.

“This will be comfortable on the land we have and will ensure good utilisation of our shed capacity over the winter.”

Everything on the farm barring two stock bulls, Goldies Nicholas and Scorboro Nero, are home-bred; they have a strict closed herd policy and last purchased a female back in 1998.

“We have kept some of our own heifers each year to try to produce cows that are docile, have length, good legs and plenty of milk.”

James describes Goldies Nicholas, who was purchased in May 2018, as a “good-looking stretchy bull with four good legs and great locomotion”.

He is in the top 1% of the breed for gestation length and 400-day weight and has some remarkable genetic EBVs.

“He was bought to produce bulls that will calve easily and grow on well. We sold one of his first sons, Tomschoice Pavarotti, to a UK stud earlier this year and he is currently undergoing trials.”

Scorboro Nero is a Fenomen X Ionesco X Normande Judge son and was primarily acquired to produce replacement females with a view to retaining maternal values within the herd. “Like Nicholas, he looks the part, is very correct and moves well.”

Calving starts towards the end of October and while they would ideally like to be finished by the end of January, some cows calve into April.

“We are gradually bringing it back. Calving is designed around having bulls for sale from February onwards in the following year.”

“Most of the bulls are sold off-farm from Christmas to the end of January, although a lot don’t move to their new homes until April.”

“Selling the majority of bulls off-farm, we like our cows to be about the 800 kg mark and whilst there is a trend for smaller cows, we need a cow that looks the part without being of show cow size.”

To date, they have produced nine bulls, sired by Kaprico Eravelle, Mereside Leo and Goldies Nicholas, which have been sold to studs in the UK and Ireland, with intentions to add to this list in the coming year.

“Young bulls are run out during the day over winter to keep them exercised and fit. With our own stock bulls and the AI sires that we use, having superior genetics for growth, better than average weight gains are achievable for their progeny.”

“With the exercise regime we run, we manage to produce bulls that carry very little cover and whilst these are ideal to sell from home, they do tend to look raw at an auction.”

“Running bulls outside, we have not done just as well as we were doing at one time in the show ring,” James added.

“We try to keep our best heifers each year to breed from and, therefore, consciously do not feed them to show condition; we like heifers to grow naturally into cows that will breed and milk rather than win a few rosettes.”

“We have, over the years, had the champion and a few junior championships at the Great Yorkshire Show.”

This year, their two stockmen, Tom and Will, intended to attend local agricultural shows, but the global pandemic has not made this possible. “We had also sold all the young bulls on-farm by the end of May, so we wouldn’t have had bulls to show anyway.”

“Whilst it is great to win, we love the shows as a social day out and they provide an opportunity to meet people, and to promote our herd to existing and potential customers.” the pedigree Limousin breeder added.

The family do not foresee any upward surge in prices going forward, so they said, they must, therefore, operate as efficiently as possible and use top genetics to produce cattle that meet market demands.