That's FarmingThat\'s Farming Irelands Largest Farming News, Properties and Classifieds Network
HomeBeef‘Suckler farmers in Ireland are among the best in the world’ 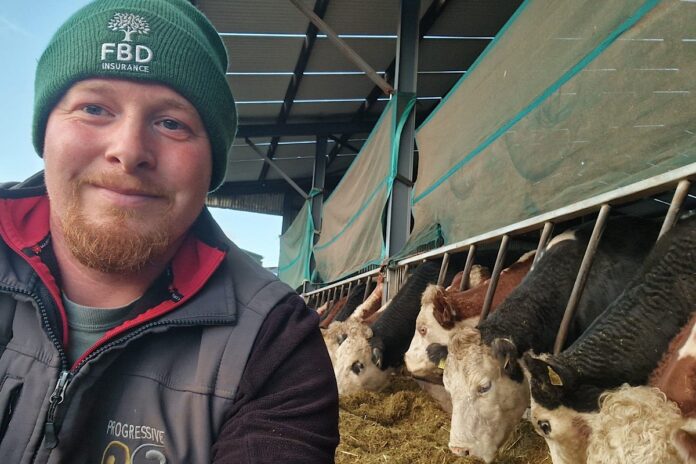 ‘Suckler farmers in Ireland are among the best in the world’

In this week’s Suckler Focus, That’s Farming, speaks to Edward Roe, Co Tipperary, the Macra na Feirme/FBD Drystock Farmer of the Year 2022. He discusses entering an official farm partnership with his father, polled genetics, the benefits of bonuses and his outlook on the future of Irish suckler farming.

When the Roe family from Roscrea, County Tipperary faced a Brucellosis outbreak in their 40-cow dairy herd in 2002, alongside a suckler herd, they bought in store cattle, and brought this to beef.

While you could say the enterprise changed from dairy to beef production, but one factor that has not is the family’s long-standing association with pedigree Hereford cattle.

Following a clear test result, Lester, and his grandfather, Edward, maintained this link in the family by investing in breeding females from various dispersal sales to rebuild numbers.

“In 2018, I entered an official farm partnership with my father, Lester. For three years, I also worked in a big feedlot, Bar-J Ranch Guest Ranch, in Canada,” he told That’s Farming.

“I did my first year in Gurteen Agricultural College before that, took a break, went to Canada, came back to Ireland.”

“In 2017, I undertook the Teagasc Distance Education Green Cert Programme course for my second year as I was working.”

Until last May, he worked full-time off the farm on a neighbour’s 300-cow dairy enterprise during weekdays mornings and evenings.

However, his wife has since secured employment, and he now works full-time on the farm.

The family select the Hereford breed because of its low maintenance as a “low-cost input animal”, its early finishing period, and the bonus structure scheme through Irish Hereford Prime.

For around the last three years, Lester’s son, Edward, a trained DIY AI technician AIs cows over a 6-week period.

He uses a team of four different Hereford stock bulls to mop up, which is a result of the farm’s fragmentation and means one bull per group of cows in each land parcel.

In their AI programme, they only select polled Hereford, Angus, and Simmental bulls, and started using these genetics around three years ago.

“We find the advantages of using polled genetics are there is less stress on the animal, less work for me without the loss of a quality animal, plus it is an extra selling point when selling our pedigree bulls.”

“There are some very good AI straws available. Still, we are limited at one point because, in my view, the majority of Hereford straws are aimed at the dairy industry.”

“Most of the bulls would be very easy calving; some are great animals, but in my opinion, they do not grow to the size of animals we like.”

Due to housing requirements, they calf their cows for five months of the year, commencing on December 1st.

The second advantage is that it allows Edward to AI cows from February 20th during the housing period.

According to the family, cows require “very little intervention” and they use Wi-Fi-powered calving cameras connected to their mobile phones to enhance management.

According to the family, the herd’s calving interval is 353 days. They strive for a “good animal but easy calving and aim to make that balance”.

The family aims for pedigree and commercial heifers to calf at 24-months-old.

“I found that the longer an animal is without a calf, the more it costs you, making it less viable.”

According to the family, the farm feeds three-quarters of cattle on a grass-based diet, which achieves their respective breed and quality assurance bonuses.

“I find bonuses open you up to a new market. For example, if you did not have a quality assurance bonus, you would not have as much of a market.”

“I will admit that this year has been tougher than most years with input costs, but we look around and save on fertiliser and meal, where we can be more efficient.

The family are toying with various options to reduce input costs and are currently researching the Supersoil chemical-free fertiliser to counteract bills.

They retain pedigree Hereford replacement heifers and sell three-quarters of bulls to dairy farmers and the rest to suckler farmers on-farm.

When choosing up to 15 replacements, they place many of their choices on a high replacement index figure, conformation, locomotion, fleshing abilities and data.

“We never had a problem selling any bulls, and this year we sold seven bulls.”

Grassland management and the future of Irish suckler farming

In the last six years, the family have implemented a paddock-based system and a stricter grazing schedule and recently purchased a plate meter to measure grass in the future.

“I was very honoured to win it and know there were a lot of other good drystock farmers in it as well.”

While the herd has gradually expanded since Edward joined forces with the family, the aim is to reach 80 suckler cows.

The family can sustain these cow numbers on their current land base as they sell off surplus silage.

“I find that suckler farmers in Ireland are among the best in the world, so we need to stick our ground and show we are doing the best we can.”

“We are doing everything we can to take care of the environment around us and produce high-quality beef,” the suckler farmer concluded.