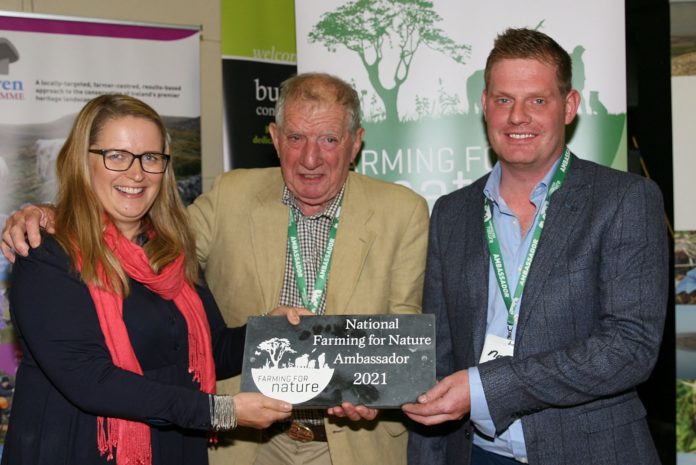 Father and son team, Norman and Michael Dunne, tillage farmers, are the winners of this year’s Farming for Nature Award.

They operate their 400-acre tillage farm in Maynooth, Co. Kildare, under the principles of conservation agriculture.

They have moved away from a conventional, intensive tillage enterprise to a regenerative farming system.

The Dunnes began making the transition on a gradual basis five years ago. They grow beans, oats, barley and wheat for the animal feed market, and Norman also produces hay for the equine market.

The family keep a small number of pigs and sheep to graze cover crops and pasture.

Their focus has been on regenerating soil biology and reducing external inputs where possible on the farm.

They grow cereal crops on the land using minimal disturbance methods such as direct drilling and min-till. Crop rotations and permanent organic soil cover systems are in place.

Additionally, they use multi-species cover crops to build soil fertility and enhance soil structure, all the while providing a food source for pollinating insects.

The farmers are experimenting with biodynamic preparations and Korean natural farming methods to enhance soil biology and to inoculate seeds before sowing.

“For the last three years, we have been using no insecticides. Of late, we have moved towards inoculating seed, saving our own seeds, inoculating them with biological seeds and root-enhancing, natural products.”

Since reintroducing regenerative farming methods on the land, there has been a significant increase in biodiversity and a return of numerous bird species to the farm.

The 2021 National Farming For Nature Ambassador Awards held its ceremony on Saturday night (October 23rd) as part of the annual Burren Winterage Weekend.

Now in its 4th year, the annual awards welcomed 23 new ambassadors to its network.

Ambassadors operate beef, poultry, forestry and tillage systems and work with a range of valuable habitats, including species-rich grasslands and heaths, wetlands, woodlands and hedgerows.

“The winner of this year’s public choice award are Michael and Norman Dunne from Owenstown, Co. Kildare.”

“This father-son duo are wonderful examples of farmers who, over the past number of years, have been gradually moving away from an intensive tillage operation to a regenerative farming system operating under the principles of conservation agriculture.”

“I think every farmer in Ireland will be able to relate to at least one of these farmers and admire what they have managed to achieve on their farms.”

“We commissioned a short film on each one of these farms so that the public could learn more about farming for nature and also choose their favourite story.”

Dr Brendan Dunford of the Burren Programme, founder and committed volunteer with Farming for Nature, added:

“This year’s farming for nature ambassadors are, like their predecessors, just so engaging and inspirational.”

“They provide a powerful and timely testimony as to how farming and nature can, and must, work in harmony and that simple actions can make a big difference.”

“These farmers deserve our respect, gratitude and support. They embody all that is great about rural Ireland. Also, they offer great hope at a time of climate and biodiversity crises.”

Bord Bia sponsors the awards, which stakeholders, including the DAFM, National Parks and Wildlife Service and the National Rural Network, support.

- Advertisement -
Previous article
VIDEO: ‘Minister I brought you a €1 coin, a gift from young farmers’ – Keane
Next article
Dry cows to €3,070 and heifers to €3,400 at Balla