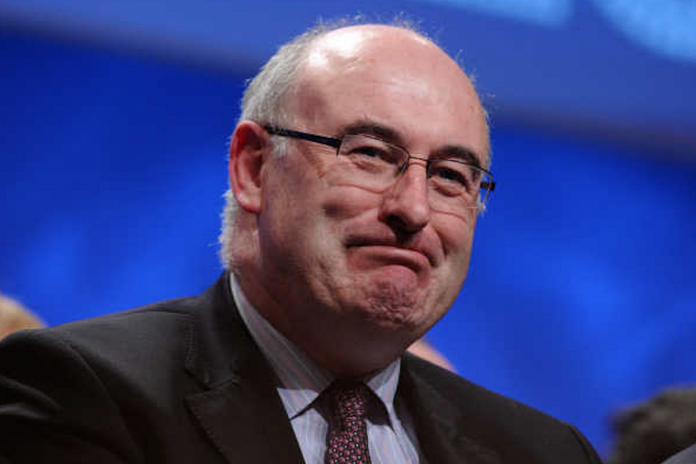 An online petition has been created asking EU Commissioner, Phil Hogan, to resign from his position.

The call comes after Hogan attended an Oireachtas Golf Society dinner along with over eighty other people, despite updated public health advice issued earlier last week.

Dara Calleary was among those who attended the event and resigned after attending the function, as reported by us here.

Richard Boyd Barrett has created a petition, demanding Hogan’s resignation and said that if he “refuses to resign, we demand that the President of the European Commission, Ursula von der Leyen, removes him from his position”.

“On August 19th, EU Commissioner Phil Hogan attended an Oireachtas Golf Society dinner along with 81 other people in what was a flagrant breach of Covid-19 public health guidelines.”

“Even before the government announced new measures curtailing the numbers at social events this week, the maximum number of people allowed at indoor social events was 50.”

“Not only this, but it has been reported that Hogan has been spending some of his time at a residence in County Kildare.”

For the past two weeks, Kildare residents have been asked not to leave the county because of increased restrictions there.

“Hogan’s decision to ignore public health guidelines is unacceptable. In attending this event, he has displayed utter contempt for ordinary people who have done their utmost to abide by guidelines and stop the spread of Covid-19.”

“Hogan’s disdain for working people and the poor has been on show before.”

Despite the resignations of Dara Calleary and Jerry Buttimer this week, he added, Hogan has thus far “brazenly refused” to step down.

“His arrogance is a slap in the face to health workers at the front lines and to all those who have lost loved ones to this pandemic. His actions have also undermined the public health effort at a crucial time.”

“Hogan represents the worst of a rotten political elite that believe there is one rule for them and another for ordinary people.”
“He must resign immediately and apologise for his actions.”

Commenting on the calls for the resignation or sacking of EU Commissioner for Trade, Phil Hogan, the President of ICMSA has warned against what he called “cutting off our Brexit nose to spite our Covid face”.

Mr McCormack said that he fully understood the anger of the people suffering under official restrictions – and he assured them that that anger was absolutely shared by his farmer members – but he also said that many decisions taken in anger were often not the most strategic or far-sighted and he strongly believed that this was one of those instances.

Mr McCormack said that his farmer-members had more occasion than most to feel angered by the whole episode – they were now contemplating the third Minister for Agriculture, Food and the Marine in eight weeks.

“But farmers and the wider food sector were also most cognisant of the overriding need to get a satisfactory Brexit deal that worked for everyone and avoid the kind of conclusion that would damage Ireland most of all and shut us out of multi-billion Euro British markets into which we had sold for centuries.”

“It was incumbent upon anyone who understood the national interest to accept that must mean that Commissioner Hogan remained in situ.”