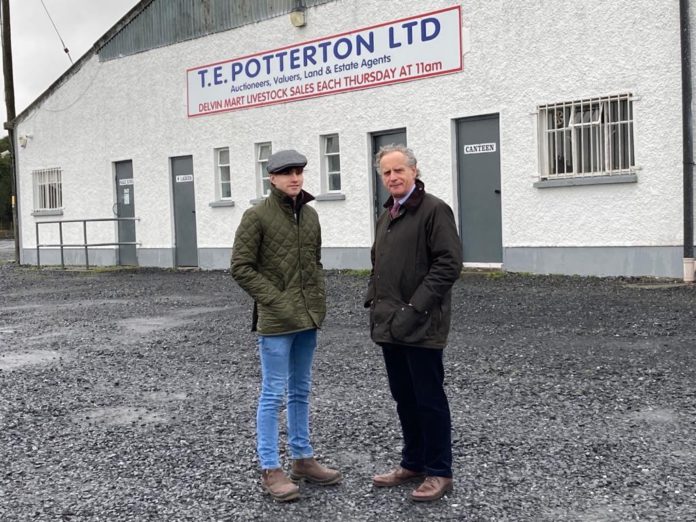 Thomas Potterton, a Trim, Co Meath, native, is making waves behind the rostrum and in the farming circles.

Thomas, who is married to Grainne and has a daughter, Alanna, and son, Elliott, works as a property and livestock auctioneer, and farms with his brother, Gerald, in Kildalkey.

His late father, Elliot, established Delvin Mart, and, since then, it has grown in a large, modern premises with the addition of a sheep and calf sale complex.

Thomas’ early memories of the mart include helping his father, weighing of cattle which, at that time, was in hundredweights.

“I would have started off clerking beside him at the age thirteen or fourteen during the summer holidays and then progressed onto selling the calves when I was about seventeen or eighteen-years-old.”

He enrolled in an auctioneering course in the College of Commerce in Rathmines and graduated as a member of the Irish Auctioneers and Valuers Institute (IAVI); subsequently, he was elected a fellow of the Society of Chartered Surveyors Ireland.

After qualifying, Thomas gained valuable experience working for a large firm of estate agents in the UK.

“The firm also ran a large livestock market which operated two or three-days-a-week, and it was not unusual for 3,000 to 4,000 sheep and over 1,000 cattle to go through the sale each week.”

Thomas’s great grandfather, Thomas Elliott Potterton, established T.E Potterton in 1886. The company is renowned for the sale of farms, country houses, and land leasing in the Meath/Westmeath area.

In 2003, the firm joined REA (Real Estate Alliance), a nationwide network of over 40 independent estate agents, with local knowledge and national expertise of the market. 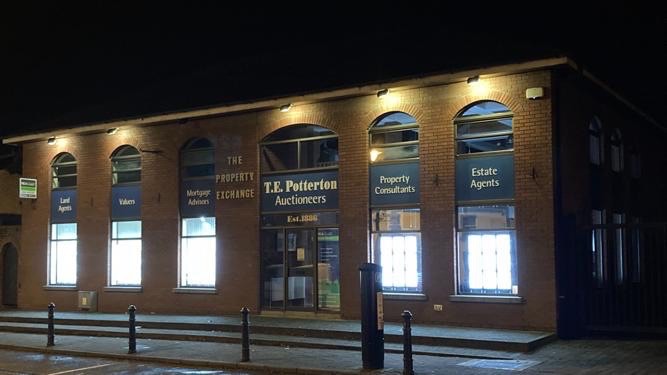 Meanwhile, Delvin Mart operates each Thursday selling large numbers of cattle and sheep each week with calf sales during February, March, and April. Sales commence at 11 am with dry cows, followed by springers, weanlings, maiden heifers and bullocks.

Under Level 5 restrictions, the mart is conducting online-only sales using the LSL online platform. The mart operates a drop-and-go-system, whereby all entries are sold subject to the owner’s consent.

Buyers are permitted to view lots before the sale, but they are prohibited from gaining access to the sales ring under current restrictive measures.

“I don’t think cattle ever made as much money until we moved to the online platform. There is amazing competition and, online is here to stay; the anonymity factor is a huge advantage.”

“A further advantage of the online system is that buyers can buy cattle from the comfort of their own homes or offices, tractor cab or even from abroad.”

“The mart has implemented two-metre social distancing throughout the premises, and all staff and customers are advised to sanitise their hands regularly, while wearing face coverings is obligatory.”

Thomas’ role begins well before the sale day when he would be chatting to farmers about the trade and booking in their livestock and arranging haulage.

Intake begins at 6:30 am with cattle penned, numbered and arranged for sale.

Delvin Mart has lairage facilities for cattle, but generally, cattle leave on the day of sale, except perhaps during the evening weanling sales, which can run late into the night.

“At this time of year, we would generally have around 200-300, lots of cattle with much bigger entries from August onwards”.

Looking ahead, Thomas has no intentions of stepping away from his role and expressed his gratitude to his loyal and hardworking staff, currently about twenty-five, for their excellent work, especially, during these uncertain times.

Thomas, a fourth-generation auctioneer and farmer, is hopeful that his son, Elliott, who has already shown keen interest in the business will continue the Potterton farming and auctioneering legacy.

- Advertisement -
Previous article
Snow expected next week with wintry showers over weekend
Next article
Mart Quiz: Guess how much these cattle sold for at Dowra Mart