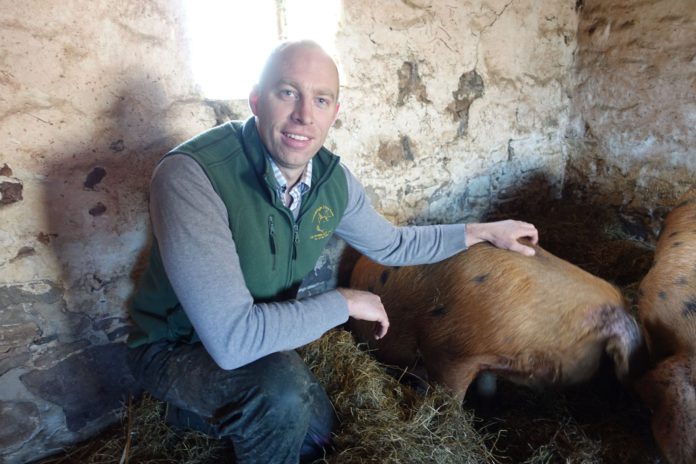 Rare Breed – A Farming Year was the most-watched programme in Northern Ireland last Thursday night with almost 140,000 viewers tuning in, equating to a 27% audience share.

The show continues tonight (Thursday, January 16th) where more farming families will provide an insight into their occurs on their enterprises during the month of February.

Stephen Lyons, who is in partnership with his brother John, in a contracting business outside Coleraine, appears in this episode.

They operate mainly in Co. Antrim and Derry and with February marking the start of the slurry season on NI farms, Stephen is out in the fields near Limavady spreading slurry using a dribble bar, which he much prefers compared to the traditional method.

He has established a herd of outdoor pigs but during the colder months the younger animals and sows come indoors, so it’s an early start for Robbie as every morning they need to be fed, watered and mucked out before he goes to work.

“There’s no gym membership required, this is a good workout in the mornings,” he said.

With two small children and another on the way he comments, “It’s busy in the house and busy outside the house.”

Gloria and her 12 piglets, as well as Big Alistair, the boar, feature on the show, along with his flock of Suffolk sheep.

Jack Smyth from Newtownsetwart is in Dungannon for the Stars of the Future show and sale. He is competing with three of his calves. He’s without wing-woman Emma and Jack teases, “She’s selling a wedding dress to some unfortunate cutty.”

Near Bushmills in Co. Antrim, David Chestnutt farms with his father, Victor.

He is assessing his Texel lambs, in the hope of selling ram lambs in Ballymena or Scotland. He comments it’s more a “feeding competition than a breeding competition” as the breed is such big business, with rams fetching big prices at auction.

The episode ends near Ballyclare in Co. Antrim, where specialist farm vet, Diane Beattie, starts her day with an unexpected emergency with a sheep.

She also diagnoses a sick cow on another farm, explaining the procedure of what to look for.   She says, “I grew up on-farm, my dad was a farmer – I like the buzz of going out.”

The series continues on Thursday, January 16th at 8.30 pm on UTV.