That's FarmingThat\'s Farming Irelands Largest Farming News, Properties and Classifieds Network
HomeBeef‘There will always be a place for continental cattle in the beef... 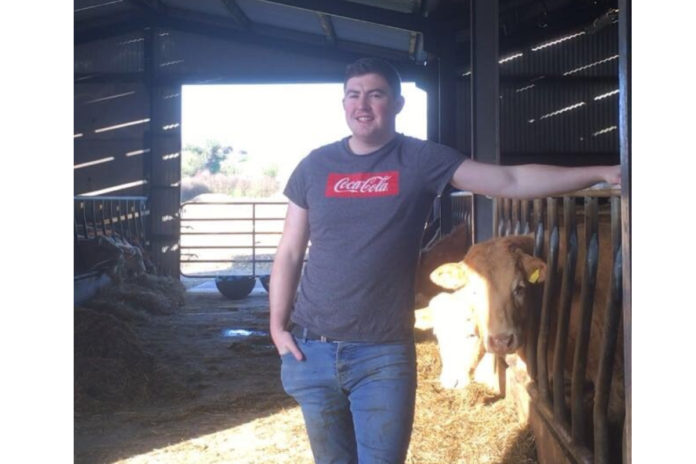 Hailing from Big Tom country in Castleblayney, Co. Monaghan, Mark Connolly is currently studying for his master’s degree while working as a milk recording technician.

The 23-year-old comes from a suckler farming background, farming 20 cows alongside his mother and father, Mary and Noel.

The Connollys use a Charolais bull on their cows, which are a mixture of Simmental, Limousin and Charolais genetics. In recent years, they have started using more A.I. on breeding females.

“In the last two years, we have gotten bigger in the A.I. – we split it with half from A.I. and then we use the bull once they go outside. We like to get them started calving in November and then a nice few of them will be back in-calf by the time they out again in March.”

“It’s important to keep your cows and your calves right because we try to sell them as weanlings. We sell them between Kingscourt and Cootehill Marts around the end of September or the start of October. The last few years we kept the heifers and bred them on.”

The Castleblayney family also cut their own silage, as they share silage machinery between themselves and Noel’s brothers. They all own different pieces of equipment and it allows them greater flexibility during the summer.

“It’s much easier that way because we find we can do our own silage when it suits instead of waiting on a contractor. We all help each other out.”

Between them they have:

The Connolly’s have been digging some of their fields recently, trying to make them flatter than they previously had been and joining fields together. They have been able to do so at their own pace, using their own digger and dump trailer.

“It started off about 3 or 4 years ago when we decided we wanted to build a new shed but we’re on a slope, so we needed to do a lot of filling. We had one big rock out in a field, so we started taking the rock out of it, but we ended up using all that rock.”

“We went into the next field for more rock and finished it. Then we had one field that was really steep and one field with the rock gone out of it, so we decided to make them into one.”

Mark studied animal science in UCD before embarking on a master’s degree in agriculture and biotechnology in September. “I’m enjoying it so far. All of the lecturers are very helpful in fairness to them.”

“There’s a good amount of it that you can take home. We study nutrition and animal diseases among other things that can be applied on the farm.”

“You learn so much that you can bring home as a farmer and there’s a great atmosphere around UCD, so it’s a great place to study. I know it’s in Dublin and that might turn people off but it’s definitely the best place to do it.”

Up until the coronavirus hit, Mark was working as a milk recording technician outside of his studies. He told That’s Farming that it suits his college schedule and he gets to meet a lot of interesting characters along the way.

“It fits in perfectly with the masters because you’re going away in the morning and the evening to work and the rest of the day is yours for studying.”

Once he has finished his master’s degree, he hopes to start a career in bovine genetics. It is an area that has always interested him, both in and out of the classroom with the breeding programme they use on their own farm.

“I’ve always liked the genetics side of things so hopefully that’s where I will end up. I like breeding, it’s interesting to see all the different variables come together in a calf when you mix two animals together.”

The Monaghan native has always been a huge advocate for suckler farming, and he believes that they will always have a place in the beef industry, despite the struggles of the last number of years

“I think there will also be a place for continental cattle in the beef industry. With good breeding and genetics, we can improve further and create greater efficiency. I’m a huge fan of the BEEP scheme and the genomics behind it is a great thing to have. Sucklers are going to be ok.”