That's FarmingThat\'s Farming Irelands Largest Farming News, Properties and Classifieds Network
HomeBeef‘There is not enough profit to be made with a herd of... 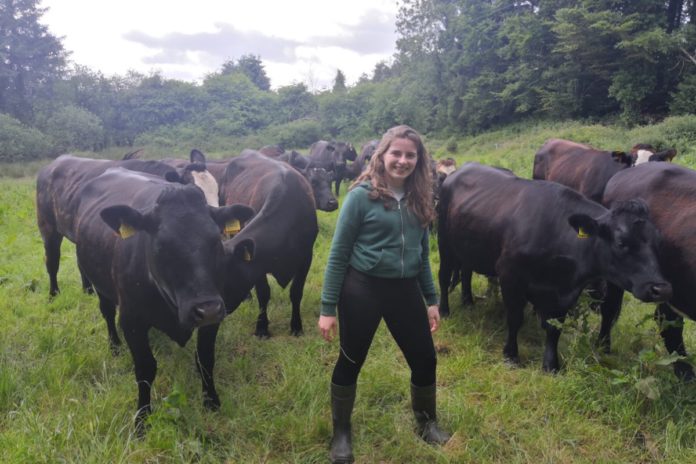 Áine Corkery hopes to combine a career in agriculture while pursuing her passion for suckler farming.

The 20-year-old, who hails from Ballyvourney, Co. Cork, farms a suckler-beef enterprise alongside her father, Jack, and her brother, Diarmuid.

The farm, which has been in the family for up to eight generations, is home to over 100 Aubrac-crosses, Angus-crosses and a number of Herefords.

Calving season on the 33-cow suckler herd begins in early to mid-April and finishes in August. “We calve this time of year so the cows and calves can be turned out on to grass once the calf is up to two-days old.” Áine, a UCD ag student, told That’s Farming.

“We don’t have to worry about the weather too much and find this great for disease control as they are in the open air.”

The Corkerys have an Angus bull which is introduced to the pastures with heifers in July for a 42-day period, with a view to these calving down in April.

The bull is then put with cows for the same duration before joining breeding females on the outfarm until mid-November.

“We currently have an Angus bull for ease of calving, but in the past, we have had Aubrac and Hereford sires. The majority of calves are weaned at housing time, however, a couple of the younger ones are left with their mothers in spacious pens and are weaned at a later date.”

They are divided once again into two groups when turned out to pasture; usually into replacement heifers (usually around 10) and the slaughter group (usually around 22-23).

Yearlings are fed on grass until housing time. During winter, their diet comprises ad-lib silage, while in-calve heifers are fed concentrates once daily and are given pre-calver mineral licks. The slaughter group are fed concentrates twice daily to ensure they are factory-fit at 22-months.

“In beef, every extra kg of LWG (liveweight gain) is so crucial and the best way to maintain good constant LWG is through having a healthy herd.” added Áine, who is passionate about animal health and disease prevention.

When Áine is not assisting on the family farm, she can be found in UCD, where she began her studies in 2019 after completing her Leaving Certificate.

Although her first choice was veterinary medicine, she accepted a CAO offer to study agricultural science at the institution.

“I did consider veterinary for a while but now that I’m studying agriculture I have put that in my past.”

“UCD has a good reputation both in Ireland and internationally. I was also impressed by the opportunity to study a semester abroad.”

Looking ahead, Áine, who will complete her undergraduate studies in 2023, aspires to take over the family-run suckler enterprise.

“Once I graduate, I would also like a job outside of the farm to ensure a regular income. I think anyone choosing a career path has to ask themselves why they want to do it.”

“Whether it is running a farm or working in the department, you need some kind of end game to justify your actions,” added Áine, who is a firm believer in having end goals.

“I personally think that suckler farmers in the future are going to be one of two things, large-scale or part-time.”

“There is not enough profit to be made with a herd of 20 suckler cows simply because costs are so high and prices fluctuate at a rapid rate. The farmer needs to earn an income also.” the ag student concluded.