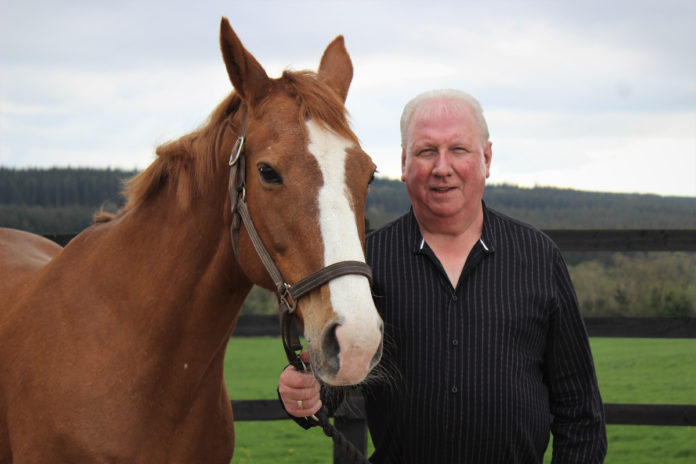 ‘There is life without a leg’ – farm accident survivor

“I had a good life, despite all the suffering.”

Those are the words of Martin Moran, a farm accident survivor who takes a positive approach to life despite the difficulties it has put before him.

The Claregalway-native lost one of his legs back in the 1950s when he was just 2-years and 8-months old.

Speaking to That’s Farming, Martin relived the day that would change his life forever.

“My father and his workers were up cutting the corn with the reaper and binder, and my brother was going up with water to them. At that age, the devilment was in me, so I found a way up after him.”

“We got to the field and my father caught hold of me and put me at the corner, away from where he was working. He gave me a big long toolbox and put me sitting on it.”

His father and workers returned to work while Martin happily sat on the toolbox and watched.

“At that stage, the corn was still taller than me. They came along to my side of the field and the horses spotted me. They hesitated but stayed going. The blade was on the outside of the machine and it caught the box and caught me.”

“It took the left leg below the knee, went through the toolbox, and almost took the right one, but the horses got stuck.”

From that point on, there was pandemonium in the field. There were no cars or tractors at that time that could rush him into hospital, but luckily the right people happened to be in the right place at the right time.

“Down at the back of our house, the Clare river runs down to the Corrib and on that day wasn’t there a man fishing, and he happened to be an orthopedic doctor in the Regional Hospital in Galway.”

“They called him, and he came to me. He shouted at them to get neckties, but they couldn’t find any. So, he took sleeves off shirts and took off socks and made sugáin ropes out of the twine of the corn. He tied each leg separately and then tied the two of them together and carried me down across the field.”

From there the doctor rushed him into the hospital in Galway. He was in hospital for 3-and-a-half-months before being allowed to return home.

He was excited to be returning to his family, but what he was greeted with on his return was not what he had expected.

“It was a wall of silence. I came home with one leg and everything was about minding me. The only thing my mother and father said was ‘don’t be asking questions and we have to look after Martin’.”

“My father never got over it, ever. The farm was never the same and everything was about me. They were always watching what I was doing and where I was going in case I would fall because I could be found anywhere.

“My family were really good to me and looked after me in every possible way they could. It knocked more out of them than out of me. I would still be trying to keep up around the farm and be involved in everything, but I wasn’t able to do a lot of things.”

“There were times when there was hurling going on, or cycling, or céili music, and there were things I couldn’t do and I didn’t like it, but I didn’t want to let on either.”

Prosthetics in the 1950s were nowhere near as advanced as they are now, as it was not until 10 years after the accident that he got his first bend-at-the-knee artificial leg.

“I was growing all the time and I would constantly need new extensions on the leg. So, my mother decided she would keep me up on her hip. No matter what she was doing, be it baking bread or feeding pigs, I was on her hip until I was 7-years-old.”

As expected, there were plenty of questions about the leg when Martin was in school. He told That’s Farming that children used to gather around him with curiosity and in amazement.

But it was not until he went to secondary school that things became really difficult.

He attended the Tech in Moinín na Gcíseach, Galway. His father made alterations to the left peddle of his bicycle so he could cycle the 8-mile journey every day.

Although his schooling was going well, the repercussions of the accident were still troubling him.

“When I was 12 up until I was 16, it was horrendous. I used to suffer, and I still do, phantom pain. I still wake at night roaring with pain in the left leg that I don’t have – it’s a mental thing.”

“I had to get skin grafts at that time as well, and I hadn’t many places to take skin from because my left leg was gone, and my right leg wasn’t great. The skin grafts were the most horrendous pain I have ever put up with,” he explained.

His disability didn’t put his life on hold, however.

After completing the Group Cert, the Claregalway-native managed to get himself a job in the motor trade with a Vauxhall dealership on college road, before eventually becoming a became a qualified storeman and qualified mechanic.

During that time, he also became the frontman for a showband called The Red River Valley Boys. While working, he played in the band in dance halls around the country at the weekends for over 12 years, before moving on to pastures-new in Dublin working as a security guard.

“I remember going to the interview and I didn’t let on that I had an artificial leg at all. If you banged the door at all that time I would nearly fall over, but if I told them I had the artificial leg, I wouldn’t get it because there was discrimination at that time against disabled people and I wouldn’t get the job no matter what I did.”

After a 2-year stint in the capital, he returned to Galway to see out the rest of his career, which included running a pub for 13 years, before retiring in Loughrea.

“I had a good life despite all the suffering. I suffered an awful lot and I suffered from phantom pain all the time, but there were great times in between because I was well looked after by family.”

“I was a very outgoing person and I never wanted to look back and think about what happened yesterday. I was always about what’s happening tonight and tomorrow and looking forward all the time.”

The only regret that Moran does have is that he didn’t go further in school.

“I finished at the Group Cert and if I just went to college for a while I could have gone to offices or colleges or somewhere that would suit me better than the amount of walking I was doing with the bar work, security, and garage work.”

“I could have an office job doing whatever and had a more comfortable job with my handicap. People think because you have one leg that you’re only physically handicapped but there’s a mental strain there as well.”

Sadly, farming accidents are not limited to the 20th century. There are still numerous people who are impacted by these events and in recent weeks this has been more prominent than ever.

Martin counts himself lucky that he was able to come through his accident and still lead a good life and now he wants to use his experience to help others in the same situation he was faced with throughout his life.

“If it still happens today and, if it does happen, I would have no hesitation to tell anybody to get in contact with me so I could explain to them there is life without a leg, or an arm, or an eye. There is a life to live if you just keep looking forward and stay positive. Whatever you lose in life, you’ll gain in something else.”

“Since I got involved with Embrace FARM, I have gotten calls from every county in Ireland. I have often gone to see people and you just explain to them or show them that it will be ok. I survived it and I’m still here today, so they’ll survive too and get on fine.”

“It has been unreal what Embrace has done for me at my age, especially when I look back at all the years I missed when there was no such thing as Embrace. I want to thank Brian and Norma and Peter Gohery. It is unreal what they have done around the country,” he concluded.

- Advertisement -
Previous article
VIDEO: Improving the body condition of your cows
Next article
Rain expected every day this week